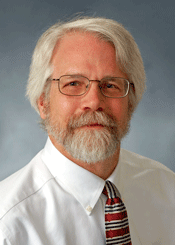 David Hurley grew up in Dunwoody, GA, then earned a BS in Biology and Physics from Guilford College in Greensboro, NC, in 1979. He received his PhD in Molecular and Cellular Biology from Penn State University in 1986. He joined the faculty in Cell and Molecular Biology at Tulane University in New Orleans in 1992. He developed "Cellular Biochemistry" as a senior-level course for premedical students, while maintaining a research focus on the regulation of gene transcription of the Growth Hormone gene in the pituitary. Dr Hurley was an National Science Foundation CAREER program awardee from 1996-2004, and was co-investigator on a National Institutes of Health grant for 17 years. After the devastation of Hurricane Katrina, he joined the Gatton School of Pharmacy at East Tennessee State University as an inaugural faculty member in July, 2007, as Professor and Vice-Chair in the Department of Pharmaceutical Sciences. He has 45 publications, is a member of The Endocrine Society, the Society for Neuroscience, the AACP, and has been a grant reviewer for 6 years with the National Institute for Diabetes, Digestive and Kidney Diseases.

"My name is Michael Westen, I used to be a spy."