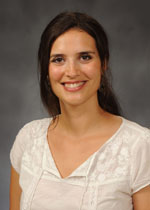 Isabel Gómez Sobrino started teaching at ETSU in 2013. Dr. Gómez completed her PhD at the University of Cincinnati the same year. She teaches undergraduate classes in beginning and intermediate Spanish, online courses, and an array of upper-level classes containing grammar, literature, and phonetics. Dr. Gómez’s research interests are adaptation and performance studies, women writers, and translation. These interests have resulted in works on adapted poetry into songs with a revolutionary agenda, the epistolary discourse of female poets in Spain in the 1920s and translations of ETSU's Poet-in-Residence, Jesse Graves. She is also dedicated to her students, and she has become the faculty advisor for the Spanish honors society, Sigma Delta Pi. She also co-directs our ETSU Education Abroad Program to Toledo, Spain.