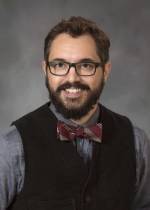 Matthew Holtmeier joined the faculty at ETSU in 2018. Originally from the Pacific Northwest, he traveled to Scotland, where he earned his PhD in Film Studies from the University of St Andrews. After receiving his PhD, he taught film in the English Department at Western Washington University and then in the Roy H. Park School of Communications at Ithaca College. His research interests span the regional, national, and transnational with a particular focus on global film, political cinemas, film-philosophy, and bioregional media. His Contemporary Political Cinema (Edinburgh University Press, 2019) explores the shifts in political aesthetics from classical films like Battle of Algiers (1966) to contemporary films such as Timbuktu (2014) in order to address the effects of global networks on cinematic politics.