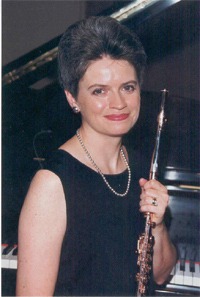 Ms. Paluzzi holds a BM in Multiple Woodwind Performance, a MM in Flute Performance, and a Diploma in Suzuki Pedagogy from the Talent Education Research Institute School of Music in Matsumoto, Japan, where she was a student of Toshio Takahashi and was the first foreign graduate from the Suzuki Flute Pedagogy program.

A specialist in Suzuki Method, Ms. Paluzzi directs the ETSU Suzuki Studies Program which is the only university-level Suzuki Flute Teacher-Training Program in the world. Students have come from Australia, Brazil, Canada, Finland, Korea, and across the United States to receive Suzuki training at ETSU. Graduates of the program are now teaching in successful Suzuki programs throughout the world.

Ms. Paluzzi has been a featured presenter at the Australian Flute Convention in Canberra as well as at National Flute Association Conventions in Phoenix, Orlando, New York, Los Angeles, Washington, D.C., Dallas, and Albuquerque and is a member of the NFA Pedagogy Committee. She was also a performer at NFA conventions in Washington D.C and New York City. Her students have performed at NFA conventions in Boston, Las Vegas, Nashville, and Pittsburgh and at Suzuki Association conferences in Japan, Boston, Chicago, Minneapolis, and San Francisco. Ms. Paluzzi has also presented at state and regional MENC conventions and was a member of the Pedagogy Saturday panel at the MTNA National Conference in Los Angeles in March 1999. Her private students and chamber ensembles have been state winners in the MTNA Solo and Chamber competitions.

Ms. Paluzzi released a CD entitled Forty Little Pieces which she recorded with her teacher, Louis Moyse, who compiled the Schirmer publication of the same title.

An active performer, Ms. Paluzzi is principal flutist in the Johnson City Symphony Orchestra, and is also a member of the Symphony of the Mountains. She has presented solo recitals in Australia, Brazil, Florida, Kentucky, Georgia, Utah, Michigan, Wisconsin, and Tennessee and has performed in Japan, and is a founding member of Meadowlark Chamber Trio, Shelbridge Chamber Players, and the East Tennessee Baroque Consort. She was featured as a soloist with the Johnson City Symphony Orchestra during the 1999-2000 season having made previous solo appearances in 1983 and 1988.

Ms. Paluzzi enjoys biking, kayaking, and hiking with her dogs, Gracey and Apex.