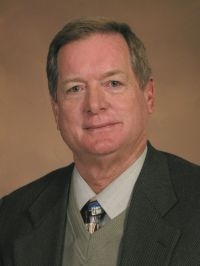 Professor and Chair; Department of Physiology

Dr Joyner was born on June 10, 1939 in Farmville, NC. He received his early school education from Dunn, NC. At Dunn High School, he was voted the Most Athletic Student. He earned a B.S. degree in Biology from Davidson College, Davidson, NC, which was followed by a M.S. in Public Health in Parasitology, and then a Ph.D. in Physiology from the University of North Carolina, Chapel Hill, NC in 1971. He received postdoctoral training from the Department of Physiology and Pharmacology at Duke University under the mentorship of Dr E. M. Renkin, a prominent cardiovascular scientist. In 1973, he joined the department of Physiology and Biophysics as an Assistant Professor at the University of Nebraska Medical Center, Omaha, NE, where he quickly rose to the rank of Professor in 1983.

Dr Joyner joined the ETSU QCOM in 1989 as a Professor with tenure and Chairman of the Department of Physiology. In 2012, basic science departments were merged into one department as a Department of Biomedical Sciences, and Dr Joyner continued as a professor in this merged department. Dr Joyner had a distinguished and highly prolific research career. During his tenure at the University of Nebraska Medical Center and QCOM, Dr Joyner served as a principal investigator on numerous research awards from the National Institutes of Health (NIH) and American Heart Association (AHA) receiving >2.5 million dollars in extramural funding. He also served as co-investigator on several awards with a funding of >2.0 million dollars. He co-authored >70 research articles/book chapters and >100 abstracts. He mentored and provided research training to numerous postdoctoral fellows, visiting fellows/scientists, graduate students, and medical students. In addition, he served on the thesis advisory committees for many graduate students. His recognition of outstanding research was demonstrated by the invited talks from various prestigious national and international institutes, organization of symposia and colloquia, and chairing of sessions at the national and international scientific meetings.

Teaching was his true passion. Dr Joyner was a dedicated and enthusiastic teacher. His enthusiasm for teaching was clearly evident in the class room. Over the years, he taught cardiovascular and gastrointestinal physiology to nursing, dental, medical and graduate students. At QCOM, he initially taught gastrointestinal physiology in the Medical Physiology course. Since 1995, he was involved in teaching of the cardiovascular physiology portion of this major course. He also served as a co-director of this course from 2009 - 2013. In addition, he served as a facilitator for Case Oriented Learning (COL) course for many years. Due to his outstanding teaching activities, he received the Students’ Teaching Award in 2004.

His services to the overall scientific community are exceptional. He served on numerous grant peer-review committees for the NIH, Department of Veterans Affairs and AHA. From 1982-1986, he was the vice chairman and chairman of the regional research review and advisory committee for AHA. In 1981, he was elected as a Fellow of AHA and a Fellow of the Council on Circulation from AHA. He was an active member of the Microcirculatory Society, Inc. where he served as President-elect and president from 1986-1988. In 1987, he participated in the closing ceremony for the Satellite Congress of the IVth World Congress for Microcirculation in the Great Hall of the People, People’s Republic of China. He also served on the Editorial Board of prestigious journals such as American Journal of Physiology: Heart and Circulatory Physiology. He was the recipient of Outstanding Professional Award from the University of Nebraska College of Medicine, Omaha, Nebraska in 1988.

For the community at large, Dr Joyner served as a project manager for the Tennessee Project Diabetes Grant, Tennessee Public High Schools (K-12) in seventeen districts in North Eastern Tennessee from 2008 - 2011 with a funding amount of >$900,000 from the Tennessee Department of health. From 2010-2012, he served as project manager for a grant on implementation of exercise, nutrition, wellness and motivational program for elementary schools in Northeast Tennessee, a grant in collaboration with Blue Cross Blue Shield/Mountain States Health Alliance (MSHA) Foundation and Growing Healthy. He was the co-founder and Vice President of Gotrybe, a kid’s fitness, nutrition, wellness and motivation program.

Dr Joyner was a distinguished cardiovascular scientist, and a brilliant educator, teacher and mentor. He served QCOM and the community for >25 years. Dr Joyner was an avid golfer and fisherman. He enjoyed spending time with his family and friends. He was a wonderful colleague with great sense of humor. Dr Joyner passed away on March 14, 2016. He is survived by his beloved wife Dr Deborah Joyner, his five children and seven grandchildren.