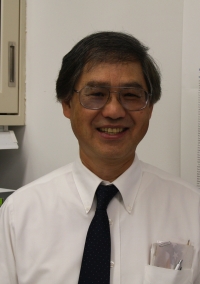 Michel (Mike) D. Miyamoto was born on April 22, 1945 in Honolulu, HI.   After high school, he traveled to the mainland where he obtained a Bachelor of Arts Degree in Biological Sciences from Northwestern University in Evanston, IL (1966).  Mike stayed at Northwestern to study the quantal aspects of acetylcholine release under the preceptorship of the late John I. Hubbard. Dr. Hubbard had studied under Nobel laureate Sir John Eccles and was considered a pre-eminent authority on neuromuscular transmission. Dr. Miyamoto received a Doctorate degree in Biological Sciences from Northwestern University in 1971. Upon completing his Ph.D. he took a postdoctoral position in Neuropharmacology at Rutgers Medical School in Piscataway NJ. There he studied the role of cyclic nucleotides on neuromuscular transmission under the supervision of Bruce Breckenridge, an authority on cyclic nucleotides. Through these contacts, Mike was able to interact with the pre-eminent physiologists working on the mechanisms of neuromuscular transmission.

After completing his training in 1972, Mike was offered a position as Assistant Professor of Pharmacology at the University of Connecticut Health Center in Farmington, CT.   This was an appealing opportunity because the department's Chair, Dr. Robert (Bob) Volle, was the leading authority on ganglionic transmission and several members of the department were actively investigating different aspects of synaptic  transmission.   At the University of Connecticut Dr. Miyamoto continued his studies on quantal transmitter release in collaboration with Bob Volle, Mickey Branisteanu and Marc Alderdice and published a major review on the subject in Pharmacological Reviews.

In 1978, Dr. Miyamoto was recruited to East Tennessee State University by Dr. Ernest Daigneault, Chair of Pharmacology, and Dr. John Hancock, who was familiar with Mike's research and his reputation as an excellent teacher, to join them at the new medical school as Associate Professor and as one of the founding members of the College of Medicine. Dr. Miyamoto established his laboratory, where he continued his studies on quantal release, first in the Old College of Medicine Building and then under the bleachers in the Minidome. Along with Drs. Daigneault, Hancock, Hoover and Kostrzewa, he taught the Medical Pharmacology course to the first class of Medical Students.

While at ETSU Dr. Miyamoto maintained an active research program, served on numerous college of medicine committees and established himself as one of the best teachers in the college.   Dr. Miyamoto served as a peer reviewer on numerous scientific journals and on study sections for agencies such as the National Institutes of Health, National Science Foundation, and Tennessee Affiliate of the American Heart Association. During this time he received several grant awards for his work on quantal release from agencies such as the National Institutes of health.

Of his many accomplishments, Dr. Miyamoto is most redound by students and faculty at ETSU as an educator, mentor and friend of students. He was always ranked by the students as an outstanding teacher and was recognized by the class of 1982 with the award of Best Instructor in the basic sciences and the Teacher of the Year award by the class of 2000. He also received the Dean's Distinguished Basic Science Teaching Award for 2000 and the Dean's (Student's) teaching award every year that that it was offered.   Dr. Miyamoto was director of the Medical Pharmacology course from 1991 to 1993, from 1997 to 2005 and in 2007.   During his time as course director, Medical Pharmacology was considered one of the best basic science courses and received special recognition as the best course in 2003 and 2004.

In line with his interest in Medical Student education and his research interests Dr. Miyamoto has authored the chapter on "Drugs that Affect Neuromuscular Transmission" in three editions (since 1994) of one of the more popular Medical Pharmacology text books. He is also a member of the Pharmacology Test Material Development Committee Step 1, National Board of Medical Examiners (2005-2007, 2008- present).

In addition to his academic interests Dr. Miyamoto is very active in the Presbyterian Church and presently serves as an Elder. He retired from the University in the Fall of 2007, at which time he was awarded the status of professor emeritus. e continued