Jonathan Ross Byrd played a lot of sports while growing up on a small farm in his hometown of Thurmond, North Carolina. After high school, he earned his associate degree in graphic design and worked for a couple of years before entering the National Guard. Byrd spent eight years as a combat engineer, which included a tour in Afghanistan in 2011-12. After leaving the military in 2014, he returned to school and earned his bachelor’s degree in studio art at Western Carolina University. While at WCU, he visited ETSU when one of his professors had a ceramics exhibit at the Reece Museum. He had the opportunity to speak with ETSU Department of Art and Design faculty members Lindsey Rogers and Travis Graves, and, drawn by the interdisciplinary nature of ETSU’s art program, he decided to attend ETSU for his graduate work. Byrd graduated from ETSU on May 9, 2020, with his master of fine arts degree. After the ETSU campus closed and events were cancelled due to the COVID-19 pandemic during his last semester, Byrd had to quickly scramble to arrange to display his final art exhibition remotely for the Art and Design faculty. When his exhibit on campus could not be held as scheduled, Byrd found himself well prepared for quarantine – he had a good supply of MREs that he had ordered to serve to guests at his exhibition reception!

When did you first discover you had a talent in art? 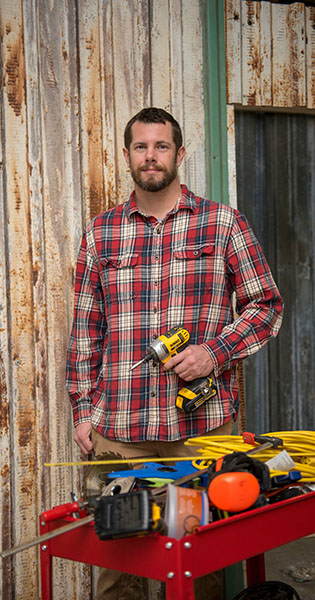 Art was something that I’d always enjoyed, and that my parents encouraged. My parents were both teachers when I was little. My mom continued to teach, and my dad became a zoologist and worked for the Department of Agriculture for North Carolina. Graphic design was the closest thing my community college had to art, so I studied that, but it just wasn’t quite what I was looking for.

On your website, you state that through your art, you seek “to shed light on the unique concerns of veteran and active duty personnel … and to challenge … stereotypical representations of the military in news media and popular culture.” What are some of those concerns, and how do you accomplish this goal?

I definitely think that suicide is one of the biggest issues – we’re still around 22 suicides a day for veterans, and the last time I looked, the active duty suicide rate was around 17.8 per month. PTSD and understanding it is important also. When a lot of people hear “PTSD,” they especially associate it with veterans. They think about violence, but I think it typically displays more as anxiety or depression. And health care is a concern for a lot of people, and while the backlog at the VA to treat disability cases is getting better, it is still backlogged.  Homelessness is a big problem. A large percentage of the homeless adult population is made up of veterans – some by choice, some by circumstances. The opioid crisis is something that’s gotten a lot of attention the last few years, but it’s been a problem in the veteran community and active duty community for a very long time.

What I do with my installation art is impersonate a situation that I experienced in a combat zone, or something I’m familiar with from combat zones, and give other people a chance to “experience” that event in a safe setting. The premise behind that is to make people think about what it’s like to do this every day in a setting like Iraq or Afghanistan. It’s a little difficult to explain in words or in a print or a sculpture, and so the best way to communicate that is to give viewers something they can immerse themselves in and examine their perception of where they are at that particular point in time.

What’s next for you now that you have graduated?