Respondents report increased anxiety but most remain hopeful for future

JOHNSON CITY (June 11, 2020) – Tennesseans are showing increased levels of anxiety and depressive disorder post COVID-19.  While a national survey conducted in 2019 found that 8.2% of adults have symptoms of anxiety and 6.6% had symptoms of depressive disorder in the previous seven days (CDC, 2020), these numbers were considerably higher in the most recent Tennessee Poll conducted from April 22-May 1 by the Applied Social Research Lab (ASRL) at East Tennessee State University.


This is part of a series of releases on the 2020 Tennessee Poll. Visit www.etsu.edu/asrl/tnpoll for additional analysis, methodological reporting, and margin of error calculations for sample and subgroup analysis.

Finally, roughly one in five respondents (18.1%) reported they had experienced physical reactions, such as sweating, trouble breathing, nausea, or a pounding heart when thinking about the COVID-19 pandemic.  These reports align with the national data from Pew (2020), which found that 19% of Americans have had a physical reaction when thinking about the pandemic.  The CDC considers these reactions to be symptomatic of anxiety or depressive disorders when they occur “more than half the days or nearly every day” of the week.  By this definition, ASRL staff found that 34.6% of Tennesseans were symptomatic of anxiety and 27.1% were symptomatic of depressive disorder, which is significantly higher than the numbers reported in 2019 (see Figure 1). 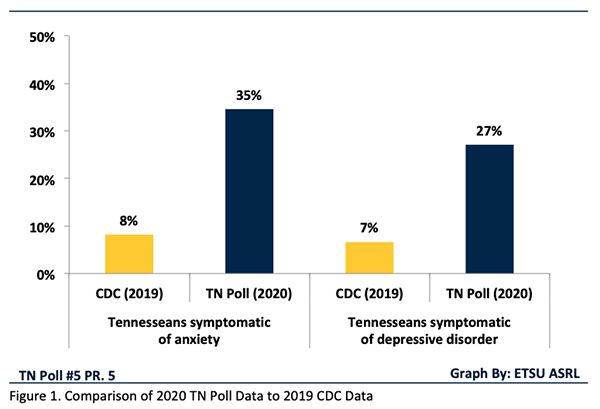 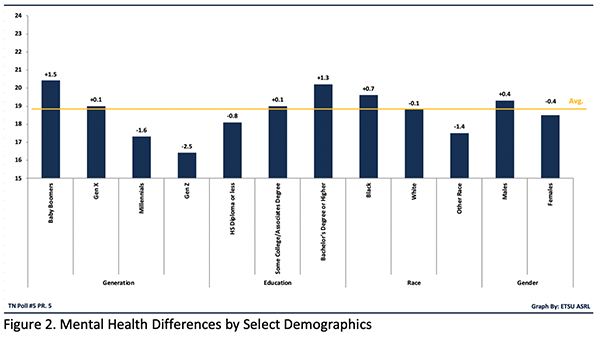 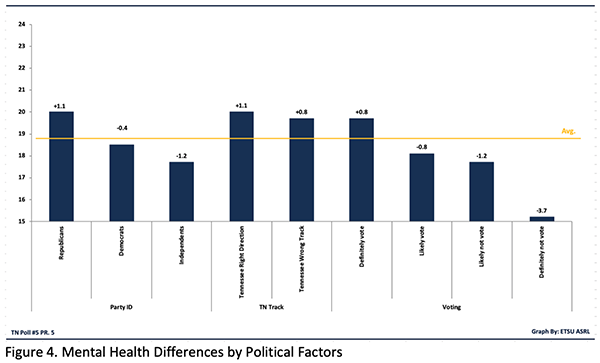 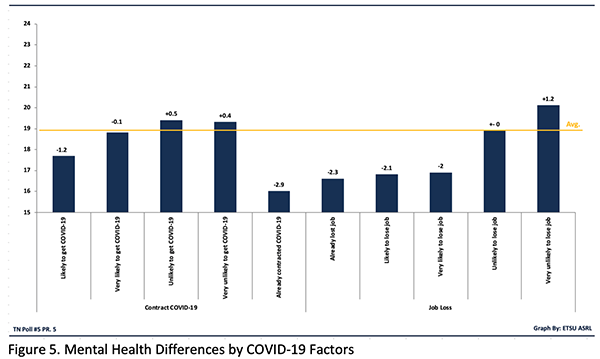 Although there were not significant differences in mental health status and strictness in social distancing, there was a difference in how likely it is that respondents will seek out the COVID-19 vaccine.  More specifically, respondents who reported they would be among the first to get vaccinated (-0.4) or in the middle (-0.3) had a lower mental health score than respondents who would be among the last (+0.1) or would not get vaccinated (+1.4).

About the Tennessee Poll

The Tennessee Poll is conducted by the Applied Social Research Lab (ASRL) in the Department of Sociology and Anthropology at East Tennessee State University. ASRL is directed by Dr. Kelly N. Foster, associate professor of sociology.

The Tennessee Poll is an annual public opinion poll funded by East Tennessee State University. The mission of The Tennessee Poll is to provide the citizens and governance of Tennessee with neutral, unbiased information on Tennesseans’ perceptions of issues that impact their health, education, and quality of life.

Though the project has been internally funded to date, there is exists the possibility of outside researchers or organizations being given the option to purchase space for questions on future polls. Should this occur, any and all funding sources will be noted in the methodology report for that particular poll.

The Applied Social Research Lab is a member of the Association of Academic Survey Research Organizations (AASRO) and adheres to the reporting requirements of the American Association for Public Opinion Research Transparency Initiative standards in research reporting.

For detailed information on The Tennessee Poll, including methodology and additional analysis, please visit www.etsu.edu/asrl/tnpoll.

The Tennessee Poll uses random digit dialing (RDD) to ensure that all Tennesseans are represented. Phone numbers were drawn from a dual frame RDD sample of cell phone and landline numbers. Braun Research Inc. acquired the cell phone sample and completed the telephone interviews. It is important to note that this particular Tennessee Poll (poll #5) was fielded during the time of the COVID-19 pandemic. Though ASRL maintains an active computer-assisted telephone interviewing (CATI) lab for research purposes that utilizes ETSU student callers, the phone lab was closed due to state regulations during this time. Braun Research Inc. had capabilities and were utilizing secure remote calling with their phone interviewers during this time so in addition to acquiring the sample, they also completed the interviews.

The final sample includes a total of 618 completed interviews, 188 completed by landline (30.4% percent) and 430 completed by cell phone (69.6% percent). The final data are weighted by age, education, gender, and race to adjust for differential response rates in order to assure that the data are as representative of the state’s actual adult population as closely as possible. The margin of error for a sample of 618 is +/- 3.9 percentage points at the 95% confidence level for the entire sample. Any subpopulation analysis entails a greater margin of error. For detailed methodology on The Tennessee Poll as well as margin of error reports and additional analysis, please go to www.etsu.edu/asrl/tnpoll.

Candace Forbes Bright, Ph.D., is an assistant professor of sociology and faculty affiliate of the Applied Social Research Lab (ASRL) at ETSU.  Her expertise is in research methodology and social issues, including public health and race. She also specializes in both quantitative and qualitatively methodologies, including social network analysis.

Kelly N. Foster, Ph.D., is an associate professor of sociology and director of the Applied Social Research Lab (ASRL) at ETSU. Her expertise is in survey research methodology and she has worked in public opinion research for 17 years.  She is a member in good standing of the American Association for Public Opinion Research (AAPOR) and currently serves on the executive council for the Association of Academic Survey Research Organizations (AASRO) where ASRL is a member organization. She is a co-editor of Polling America: An Encyclopedia of Public Opinion, Second Edition, due out in September 2020.

Morgan Kidd, M.A.,  is the assistant director for the Applied Social Research Lab (ASRL) at ETSU. She received her Master of Arts in Sociology from ETSU. She is an active member in good standing with the American Association for Public Opinion Research (AAPOR) and is active with the International Field Directors & Technologies Conference annually.

Note: To receive forthcoming TN Poll results, contact Jennifer Hill at hill@etsu.edu to be added to the distribution list.