JOHNSON CITY, Tenn. – By his own account, Dr. David Harker has taken charge of East Tennessee State University’s Department of Philosophy and Humanities at a time “when it is becoming increasingly apparent that we all need to get better at listening to those with whom we disagree, and then reflecting on our reasons for believing as we do.”

“Philosophy and the humanities,” said Harker, “have a really important role to play in this.”

Named chair of the department this summer, one of Harker’s primary goals is to provide students and members of the community with more opportunities to talk about important issues. 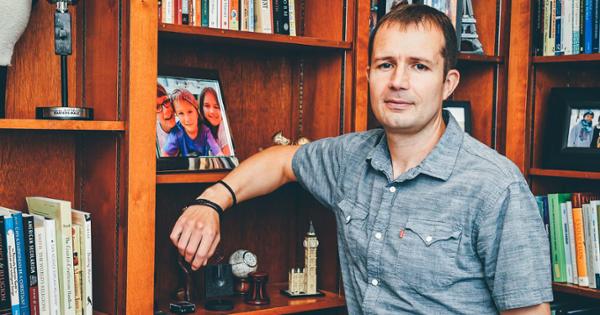 “I think we can also help steer conversations in ways that place greater emphasis on evidence and reason, rather than emotion, prejudice or a misplaced sense of loyalty,” he said. “This all strikes me as very important for today’s world.”

From “Philosophy as Conversation,” a course aimed at discussing the beliefs and values of the students in the class, to “Bioethics,” a class that examines the philosophical issues surrounding medicine and biotechnology, the department offers a range of courses. Students have the option to major in philosophy, religious studies, or justice, ethics and law. Minors are available in philosophy, religious studies and humanities.

Philosophy “is a bit unusual,” Harker said, “since it does not direct graduates into any specific career paths.”

“Not only can we see that philosophy majors tend to do well after college, we also have a plausible explanation for why they do. Philosophy students become better critical and creative thinkers,” said Harker. “Studying philosophy improves communication skills, the ability to understand complex ideas and the ability to identify strengths and weaknesses within alternative points of view. These are all attributes that employers value very highly.”

A professor at ETSU since 2006, Harker earned a Ph.D. in philosophy from the University of Illinois at Chicago. A native of Yorkshire, England, he has published on an array of topics, including uncertainty and bias in science and society. He won the ETSU Distinguished Faculty Award in Research in 2017.

“Everyone should take at least one course in philosophy. Philosophy develops really valuable skills, but it also opens our eyes to different ways of thinking about even very familiar concepts,” he said. “Philosophy is also really fun. Who would not want to spend time puzzling over the possibility that they could be a brain in a vat, or wondering whether computers will ever think or whether we are morally obligated to donate all our money to charity?”

To learn more about the department, visit etsu.edu/cas/philosophy/default.php.