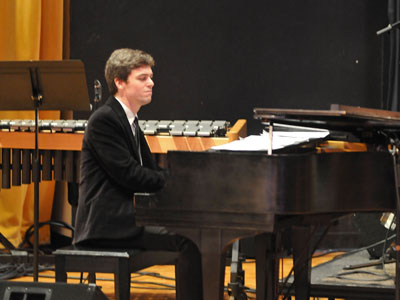 East Tennessee State University congratulates alumnus Justin Stanton, a member of the Brooklyn, N.Y.-based band Snarky Puppy, which, along with vocalist Lalah Hathaway, took home the 2014 Grammy Award for “Best R&B Performance” for “Something,” a track from the band’s “Family Dinner-Volume One” album on Ropeadope Records.

Snarky Puppy plays a mixture of jazz, funk and world music and has earned critical acclaim from the BBC, “Village Voice,” the “Guardian,” the “Boston Herald” and more.  The band has performed at venues and festivals in Asia, Europe, Australia and North America.

Stanton, an Elizabethton native and 2005 graduate of ETSU, went on to earn his master’s degree in jazz studies at the University of North Texas, where Snarky Puppy was formed.  The jazz trumpeter and pianist has also appeared recently with Gin Wigmore on “The Tonight Show with Jay Leno,” “Jimmie Kimmel Live,” “The Ellen Show” and “Good Morning America.”

Stanton began taking trumpet in the sixth grade and piano in the seventh grade, but was primarily a trumpeter during his school years.  However, after their keyboardist left, Snarky Puppy invited him to join the band and play keyboard.

At ETSU, Stanton studied extensively under Dr. David Champouillon, a Bach Trumpet Artist/Clinician and professor of trumpet and jazz studies in the ETSU Department of Music.  Champouillon, a former U.S. Air Force solo jazz/classical trumpeter, is leader of The Jazz Doctors, a popular regional ensemble.

“Justin Stanton is that kind of student, and now colleague, that every teacher yearns to be privileged to work with – one that comes along very rarely,” Champouillon said.  “Justin was a ‘musical sponge’ in every venue he performed in here – whether it was an ETSU ensemble or the Faculty Brass, the Johnson City Symphony, or as a founding member of the Jazz Doctors.

“I congratulate him as he continues to make all of ETSU look good and I am honored to have had any influence on his success. Through hard work and dedication, his future is assured.”