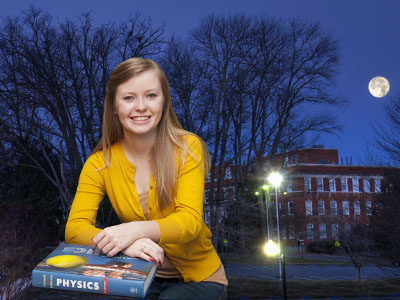 From a small student research lab on the second floor of Brown Hall, ETSU junior Kristen Campbell studies how galaxies merge and interact.  In fact, she spent the majority of the summer of 2013 examining the X-ray luminosity of dozens of galaxy systems as part of a NASA-funded study. She is using the findings from that study as the foundation for her undergraduate thesis in the Honors-in-Discipline program.

And this week, she will discuss her research with members of the Tennessee General Assembly as she and six other ETSU undergraduates travel to Nashville for “Posters at the Capitol Day.”

Campbell’s poster presentation discusses how well-known astronomer Alar Toomre introduced the idea that elliptical galaxies were remnants of merging spiral galaxies.  Toomre used a sequence of 11 systems to present this theory, and even though additional studies have been conducted on different merging and interacting galaxies, Campbell says these lacked a large sample size.

In her project, Campbell gathered X-ray data  from the archives of the NASA Chandra telescope on 42 different galaxy pairs.  Each galaxy was classified into one of seven merger stages.

“We calculated the ratio of the X-ray luminosity of each system to that in the far-infrared and that in the near-infrared, “Campbell said.  “We found no correlation of these ratios with merger stage, a finding which differs from what previous studies have shown.”

Campbell says she chose ETSU because of its strong pre-medicine program.

“ETSU was also the perfect size, and the campus is so beautiful,” said Campbell, adding that both of her parents are ETSU graduates.  “You can do anything outside.  During my freshman year, I spent countless hours outside every day just sitting in the courtyard behind Centennial Hall.

“I have been very impressed by the physics department,” she said.  “It has been an amazing experience, and I have been given opportunities here that I would not have received elsewhere.  I have been especially lucky to work with Dr. Beverly Smith.  I met her during orientation and she is fantastic and is a great mentor to student researchers.”

Campbell came to ETSU from the Knoxville area and is a graduate of Farragut High School.  She is majoring in physics and Spanish and plans to attend medical school.