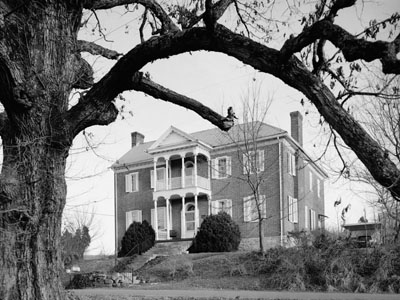 CASS has been awarded a $25,000 grant to support an interdisciplinary exhibition by artist Paul Kennedy entitled “The DeVault Tavern,” which will be held in the Reece Museum, a unit of CASS.

The DeVault Tavern, a U.S. National Register of Historic Places listing, is located approximately five miles west of Jonesborough in the community of Leesburg. The two-story brick tavern was built in 1819-1821 by Frederick DeVault (spelled Davault at that time).  As its name suggests, the house originally served as a way station and inn along the region’s primary stagecoach route, until the new railroad bypassed Leesburg in 1857 in favor of Jonesborough.  Even after the house was a “tavern” in name only, it continued to anchor a working farm of 200 acres until the early 1960s.

By the 20th century, historians, journalists and preservationists had begun to recognize the DeVault Tavern as a unique regional landmark.  Its layout is a puzzling maze — four staircases lead to separated second-floor rooms, with a fifth stairwell to the attic. The original decorative scheme of faux-grained woodwork survives largely intact. The family held onto the Tavern until the house was finally sold to parties outside of the family in 2009.

Kennedy, a Brooklyn-based artist who grew up in Jonesborough, began photographing and researching the DeVault Tavern in December 2009, just after its sale, and has continued to make photographs as the new owners began a gradual restoration.

After the sale of the property, an extensive archive was discovered in the house — a trove of more than 1,100 items — including photographs, letters, ledger books, diaries and other material, spanning the Tavern’s entire history.  The Tavern’s new owners have promised to donate these materials to the ETSU Archives of Appalachia, another unit of CASS.  This collection of archival material makes it possible to tell a detailed story of the daily experiences of the people who lived in the house and worked in its landscape.

For the exhibition, Kennedy will take on the dual role of artist and guest curator, designing an installation and writing interpretive labels that will evoke the detective-like process of archival research and investigation.

Twenty of his large, framed photographs will serve as the exhibition’s “establishing shots,” introducing the house and landscape as theatrical spaces replete with evidence.

Specially selected archival material from the Tavern collection will be displayed in table cases, on hooded pedestals, and in small frames on the walls, along with research material drawn from other sources, such as census forms, photos, transcribed letters and maps.  The installation will also include six pieces of museum-quality antique furniture that originally belonged in the Tavern.  These pieces of furniture will be displayed with other objects and images as “still life” listening stations where visitors can hear excerpts of oral history interviews with DeVault family members.

A book-length, scholarly and artistic publication will extend the exhibition with additional photographs and archival material, a text by the artist, and scholarly essays by both Dr. Tom Lee, an associate professor in the ETSU Department of History, and Diana C. Stoll, based in Asheville, N.C., a writer and longtime editor for the Aperture Foundation.  Public programming will be an integral part of the three-month exhibit and will include lectures, panel discussions and workshops.

According to CASS Director Dr. Roberta Herrin, “We are grateful for this first-ever National Endowment for the Arts grant (for ETSU as an institution) and excited about ‘The DeVault Tavern’ exhibition.  The collective community memory and lore surrounding the Tavern make it a major point of interest, and the exhibit and programming will be of interest to local residents because it connects to their personal lives and family history. The exhibit is also noteworthy because it uses local history as a gateway to art.”

Kennedy’s DeVault Tavern project is similar to his earlier photograph series that traced the recent history of the 19th century Wells-Smith House, also known as the Sabin House, in Jonesborough. That series of more than 300 photographs documents the development of three buildings — the old house, a new house built from reclaimed Wells-Smith House materials at the corner of Washington and College streets in Jonesborough, and a hotel built on the home’s original site.  The series is documented in Kennedy’s book, “The end of the day” (Darling Publications, Cologne, Germany, 2009).