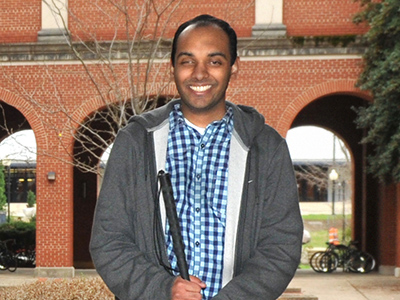 Agrawal, who has lived in Johnson City since the age of 10, suffered a retinal detachment when he was 12, which left him blind despite several surgeries on both eyes.  He was a homebound student for a while before re-entering school at Johnson City’s Science Hill High School, where a teacher worked with him on learning to read Braille and using a computer with screen-reading software.

He chose ETSU for its accessibility and its proximity to home.

“Given my disability, I wanted some more time to prepare before I go out in the ‘big, bad world.’  Since ETSU was local and it was accessible, it was a good place for me,” Agrawal said, adding that he has appreciated the level of one-on-one attention he has received from faculty, especially those in his major departments.

Agrawal began as a biology major, but took some math classes to find out how he would do in them, even though he was not sure how he would be able to read the required materials and type papers in that field.

“One thing that’s tough, being in math and physics, is that there aren’t a lot of blind people in math and physics,” he said.  “There are mathematicians, but there aren’t a lot of them, and there aren’t many people familiar with how to help blind people in math.  So I did a lot of exploring, talking to Disability Services, talking to my professors, to see about the things I could use to work in math.  These days, you have all this computer software, and still lots of things out there to explore … so eventually I completely switched to math.  Now I can type all my math papers.  I can do programming on a computer, and so I’ve come a long way.”

After graduation in May, Agrawal plans to pursue a Ph.D.  “I’m not sure if it’s going to be in math or physics.  I’m kind of torn between the two,” he said.  “But for a long time, I’ve told myself I wanted to go into academia – to be a professor, to do research, to teach.”  He is weighing offers from the graduate schools at Vanderbilt, Indiana University at Bloomington and Georgia Tech, and says he will defer those offers for a year so he can start his graduate studies at ETSU, giving himself a bit more time before leaving home.

While he plans to be a mathematician or physicist, though, Agrawal also professes a strong love of the arts and literature.  One of his favorite pastimes is reading, and he enjoys everything from poetry, fiction and fantasy to philosophy.

“I think when some people hear ‘math and physics,’ they may think of a rigid, logical guy,” he says.  “I feel like I’m not in that category.  My favorite poet is T.S. Eliot, who is not structured, who is not like Shakespeare, not mathematical – he’s very unstructured, and that appeals to me.

“Math is sort of like a game to me, and physics is sort of like a painting to me.  It’s trying to describe the world in a certain kind of framework, kind of like how a painter or poet would like to paint a picture of the world and try to describe it.  Math and physics are concerned with structure; they’re concerned with the skeleton of the world.  Things like literature and art are concerned with experience.  What is the thing inside your head that’s actually experiencing something?  Science can never understand what it’s like to be inside a head, what it’s like to actually experience.  The arts and literature have real value that science can never replicate.”