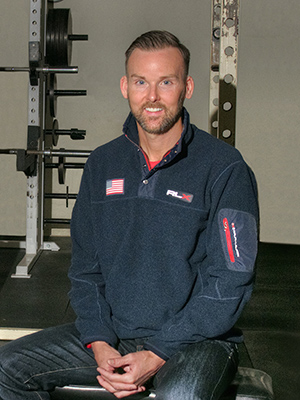 Dr. Brad DeWeese wasn’t able to travel to Sochi for the XXII Olympic Winter Games.  Like most of us, he watched the events unfold from his television at home.

But considering the number of texts, emails, phone calls and Skype sessions he had with some of the athletes leading up to the games, he practically had a front-row seat.

DeWeese, who is an assistant professor in the Department of Exercise and Sport Science in the Claudius G. Clemmer College of Education, has spent the past eight years preparing athletes for the Olympic Games. He was the strength, speed and conditioning coach for nine athletes and two alternates who went to Sochi.

DeWeese began coaching these athletes while serving as head sport physiologist for the U.S. Olympic Committee’s Winter Division in Lake Placid, N.Y., and has continued working with them since joining the ETSU faculty in August 2013.

In addition, he has overseen the physical preparation of world-class athletes for international competition in various other sports, including track and field, freestyle ski, biathlon, karate, canoe/kayak and the marathon.   He currently serves as head strength and conditioning coach for the USA Canoe/Kayak National Slalom team.  Collectively, his athletes have achieved six world championships, 12 national championships and 100 medals in international bobsled, skeleton, track and field, karate, canoe/kayak, luge and freestyle ski competitions.

In addition to coaching elite athletes, DeWeese says he is also grateful for the opportunity to mentor his students at ETSU, where he teaches in the undergraduate, graduate and doctoral programs.

“I love helping students find where their passions are and to keep them on that road, whether it be through networking with other professionals, or taking the right courses, or becoming involved in different projects or studies,” DeWeese said.

“It is a lot like working with athletes,” he added.  “Whether it is winning a gold medal or earning a degree, we are here to help them achieve a dream.”

DeWeese earned his undergraduate and graduate degrees from Western Carolina University and his doctorate in educational leadership from North Carolina State.  He says it was the opportunity to teach students and also be part of the Olympic Training Center at ETSU and the school’s Center of Excellence in Sport Science and Coach Education that led him to the Clemmer College of Education faculty.