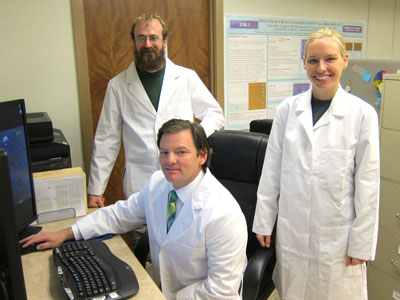 JOHNSON CITY (October 9, 2014) – Brain-computer interface (BCI) devices have proven to be effective in helping patients with amyotrophic lateral sclerosis (ALS) communicate during advanced stages of the disease when complete paralysis takes over the body.

Now, a researcher at East Tennessee State University has shown that the device can also be beneficial to patients who have suffered a brainstem stroke and are experiencing “locked-in” syndrome and have no ability to communicate with the outside world.

The study, led by Dr. Eric Sellers, an associate professor of Psychology in ETSU’s College of Arts and Sciences, appears in the current issue of Science Translational Medicine, which published Wednesday.

According to Sellers, the BCI can record brain activity using small sensors placed on the scalp.  In his research work, Sellers used the BCI to detect a common brain response called the P300, which is a positive spike in the brainwaves that occurs about 300 milliseconds after the brain has detected a meaningful stimulus.

The P300 becomes a “virtual finger” for a typing device, and patients are instructed to pay attention to a specific “key” in a grid that represents a computer keyboard. The BCI randomly flashes letters and numbers at a rapid rate, and the person pays attention to the key they want to select.  When that item flashes, a P300 occurs and a computer screen displays the words and sentences the patients are trying to communicate.

“We have significant research showing that BCI is beneficial to ALS patients, but until now there were no studies that looked specifically at patients with a brainstem stroke to see if it worked for them as well,” Sellers said.

Sellers’ article in Science Translational Medicine detailed a 13-month studying involving a patient who had suffered a brainstem stroke and was experiencing locked-in syndrome.  The patient was able to successfully operate the BCI system during 40 of 62 sessions and could spell words accurately and also initiate dialogue with family members.

“Locked-in syndrome is associated with conditions other than ALS, and this study suggests that BCI may be useful regardless of the precipitating event that caused the condition,” Sellers said.

Other authors of the article are David Ryan and Christopher Hauser from Wake Forest University.