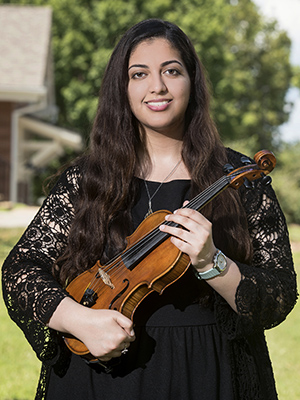 Abeer Chaudhary knew of ETSU from living in Johnson City and having two older siblings who had been University Honors Scholars.  But it was the personal touch of a former Honors College administrator that convinced her to follow in her siblings’ footsteps.

“I applied for the same scholarship my senior year,” said Chaudhary, who recalled the day she and a fellow future Honors Scholar were called to the counselor’s office at Science Hill High School.  “I don’t think either of us was expecting Dr. Joy Wachs, who was the University Honors Scholars director at that time, to be on the phone with our counselor, extending a scholarship invitation to us to come to ETSU.  Her warmth and excitement that you could feel through that phone call – that was what ‘sealed the deal.’”

Chaudhary, now a senior, hopes to contribute to the environment in both the Honors College and ETSU as a whole that has nurtured her as a student.

“I really enjoy being a part of the Honors College,” Chaudhary says.  “It’s become my second home, my second family.  I really wasn’t expecting to find that in college.  It’s just such a supportive group of people.  It doesn’t matter what you’re going through.  You can go inside the Honors House and sit down next to someone you’ve never talked to, and just have a random conversation.  It’s a special bond between the students, and the faculty, as well.

“I hope to just be supportive and be helpful to any student on campus,” she continued, “because I feel that’s what makes us unique.  From the professors to your fellow students – wherever you turn – everyone’s cheering you on, like they want you to succeed.  That’s such a great environment to be in.  I couldn’t have asked for a better undergraduate experience.  I hope to contribute to that environment, and also spread the word about our Honors College.”

Born in New Jersey, where her parents settled after moving from Pakistan for her mother’s medical residency, Chaudhary is majoring in microbiology.  She enjoyed the general microbiology class that was required for her original biology major so much that she investigated it as a major.  “I discovered that it seemed more fitting for what I was interested in studying – more of the human aspect of biology.”

Chaudhary, who is active in the Minority Association of Pre-Health Students and the new Muslim Student Association at ETSU, plans to follow her mother’s lead and attend medical school after graduating in May 2018.  She has been busy this summer, studying for the MCAT and applying to various schools.

And, she has found, she loves her minor as much as her major.

Chaudhary took up the violin as an 11-year-old at her parents’ encouragement.  Near the end of her fifth grade year, the Johnson City School System’s middle school orchestra performed at her school.

“That’s how my interest was sparked, just seeing how these kids could learn so much within the span of a year,” she said.  “That was something I felt I could do, as well, and I wanted to give it a try.  I never realized how invested I would become in it and how big a part of my life it would become.”

She has been excited to see the growth of the strings area of the ETSU Department of Music during her time as a music minor, with the hiring of a full time strings faculty member and the establishment of an orchestra.  She has also performed with the Milligan College Orchestra and the Johnson City Symphony Orchestra over the past few years.

Although she is going into the medical field, Chaudhary plans to continue her musical pursuits.

“I’ll hopefully just keep up the hobby, really, for myself.  It would be nice to continue playing in an orchestra.  And, of course, I love going to concerts and recitals, so I definitely support the arts in that way.  When people ask me, ‘Why not just study music full time and become a musician?’” she said, “my response is that I’ll always be a musician, now that I have a knowledge base and a pretty good foundation for what I do, and that’s not going to diminish.  I’ll always have that with me and I can play whenever I want, and if I want to audition for an orchestra, I can do that.”