Rosie McVeigh, a native of Tennessee’s oldest town, Jonesborough, took a year and a half off between graduating from University School, located on the ETSU campus, and beginning her studies at ETSU.  During that time, she traveled to Nicaragua, lived in Miami and worked as a model.  Now a senior anthropology major with minors in both culture and health, and Spanish, McVeigh puts her academic interests to work in her hometown at the Ardinna Woods Arboretum.  She holds a good deal of responsibility as an intern at the arboretum, which she manages.  In making sure it is properly maintained, she works with Future Farmers of America students from nearby David Crockett High School, who visit the arboretum several times a semester to help clean up the walkways and weed the lots, and she coordinates an “Adopt-a-Plot” program.

How did you choose your major of anthropology, and how does that tie in with your work at the Ardinna Woods Arboretum in Jonesborough?

I actually declared an anthropology major my first semester at ETSU because it ties in everything I’m interested in. Language is a part of anthropology, so I have a Spanish minor.  I love culture, I love traveling, and I love learning about people in cultures other than my own, and so I wanted to pursue something that combined all of that.  So I chose anthropology, and I added the culture and health minor because I’m interested in medicine and health systems in other cultures, which brought me to plant medicine, which brought me to the arboretum. 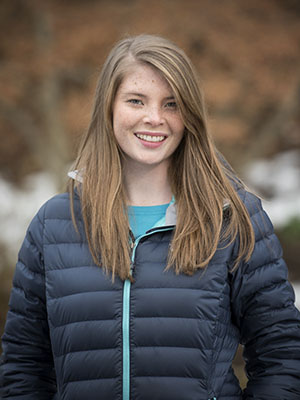 I understand you were interested in medical school at first.

Initially, I was interested in the concepts being taught to medical students, but I soon realized the work I strive to do isn't necessarily in the hands-on part of the medical field, but rather behind the scenes.  What interests me most is health care and health systems in other cultures.  These are studies pursued in medical anthropology.  I went to India in the summer of 2017 with the Himalayan Health Exchange, and I would do it again in a heartbeat.  We conducted health clinics across the rural Himalayas, and it was a life-changing experience.  But at the same time, it became clear to me that medical anthropology was what I was destined to pursue, not medical school.  My experience in India has shaped who I am, my future decisions, and the path that I’m on, so I’m excited to see more of that.

After I graduate from ETSU, I my plan is to join AmeriCorps for a year and work with a community/economic development program to gain professional and life experience.  Then my plan is to go to graduate school to study and pursue a career in international relations.

This past summer, you attended ETSU’s archaeological field school at Pickett CCC Memorial State Park.  Tell us about that experience.

I wanted to do the field school because I thought it would be more interesting and hands-on than the classroom-based course.  Three other students and I lived in a cabin at Pickett State Park, just north of Crossville, and each day we went to either the dig site or to work in the museum.  In the museum, we would give tours, do atlatl (spear) throwing, and do pottery with kids.  At the dig site, we dug a meter-by-meter plot, five centimeters at a time.  We dug at a rock shelter site in an attempt to find stone tools dating back thousands of years.  It was very hands-on and a great way to learn the material!

How did you get into modeling, and what have been some of your most outstanding experiences in that field?

I was 15 when I first started modeling.  I had done a shoot with this photographer friend of ours, who showed my pictures to this Atlanta agency.  They said, “Oh, my gosh, we love her freckles!”  So I ended up meeting with them and started modeling with them, and then they connected me with a Miami agency.  So I went to Miami.  I was only going to stay for two weeks, just to check it out, and I ended up staying for the modeling season, which was six months!  That was definitely one of my more spontaneous moments.  I think that’s important, though, because spontaneity creates experiences that push you out of your comfort zone.  I also did some work with a few different department stores for their catalogs and e-commerce advertisements.

What do you enjoy in your spare time?

When I’m not at the arboretum, or at school, or doing research, I enjoy playing tennis with ETSU’s Tennis Club.  I also play pickle ball at the local community center almost every morning during the week.  I knit when I have the time and enjoy starting new projects that challenge me.  There is a knitting group that meets in Jonesborough that I want to start attending.  I have two nephews in the area, so I love hanging out with them.  And I'm almost always planning my next traveling adventure.

What is a “fun fact” about you?

I have a 12-year-old, 200-pound English mastiff.  His name is Baxter and he's a big old baby.  Also, I’ve been to nine countries thus far.  I plan to study abroad in Spain this summer, and plan on going to Scotland after that.  I’m 22, so that’ll be 11 countries at 22!  I’ve been to England, France, Belgium, Switzerland, Germany, the Netherlands, India, Nicaragua and Canada.  My goal is to visit all seven continents in my life.