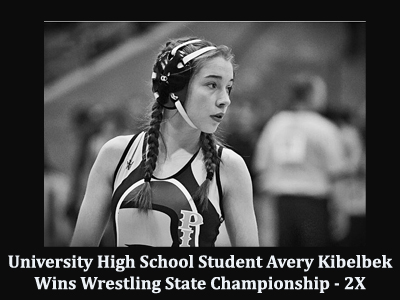 Congratulations to University School student Avery Kibelbek , who won the Girls TSSAA Wrestling State Championship , for the 2nd year in a row!!!!  Avery wrestles with our Washington County sister school, David Crockett.  We are so proud of Avery! The following article was printed in the Johnson City Press :


Dobyns-Bennett led the local efforts with two state champions and a fifth-place finish in the Class AAA team standings with 124.5 points.

The Indians’ Jackson Hurst captured the 145-pound weight class with a dramatic 7-6 victory over Thomas Williams of Rossview. Tre Morrisette, the Super 14 wrestler of the year, was the 160-pound champion with an 11-7 decision over Dejon Glaster from Oakland.

Brennan Watkins made it to the 126 final, where he dropped a 7-5 decision to Trae McDaniel from Cleveland.

Science Hill had four medalists, highlighted by Tyler Seeley winning at 132 with a 6-0 decision over Ethan Moore of Rossview. The Hilltoppers ranked sixth in the team results at 115.5 points.

Braxton Mann and Jared Harter each received third-place medals. Mann took a 9-3 decision over Landon Fisher of Jefferson County for third-place at 138. Harter, who beat Morrisette for the Region 1-AAA title, was third at 160 with a 5-4 decision over Cleveland’s Nate Schilling.

Joseph Frye also earned all-state with a fifth-place finish at 152.

In Class A-AA, Elizabethton’s Jonathan Morton made quick work of Pigeon Forge’s Caleb Wolfe, getting the pinfall in just 1:32 of their 195-pound match.

Alex Overbay of Sullivan South finished fourth at 145, dropping a decision to Malachi Bennett of Fairview. Kodiak Cannedy of Greeneville was the Class A-AA 145 champion.

The girls’ tournament was highlighted by Avery Kibelbek of David Crockett pinning Elizabeth Raper of Cookeville in 3:10 at the 103 class. It completed a 20-0 season for Kibelbek.

Tyesha Taylor of Elizabethton dropped an 8-3 decision against Annalynn Rakett of Clarksville Academy in the 119 final. 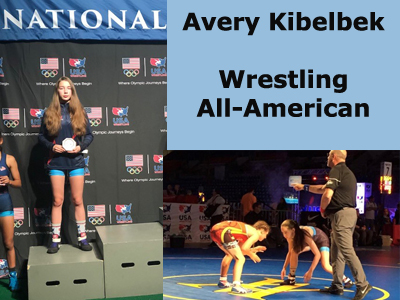 UH Student Avery Kibelbek participated in a Wrestling Tournament and became All-American!  She is only the second girl in TN history to accomplish this feat at this tournament!

Congratulations to Avery Kibelbek who won the 2018-2019 TSSAA Wrestling State Championship at 103lb weight class.  Avery is a University School student who is a member of the Wrestling Team for the David Crockett Pioneers (our Washington County sister school).

So very proud of you, Avery!

Congratulations to Avery Kibelbek for advancing to the TSSAA State Tournament in Girl's Wrestling.  She will be competing in the state tournament this Thursday thru Saturday(February 14th-16th).  Go, Bucs, Go!