JOHNSON CITY – Eleven members of the Class of 2021 who have distinguished themselves for academic excellence, service and leadership at East Tennessee State University have been inducted into the 1911 Society. 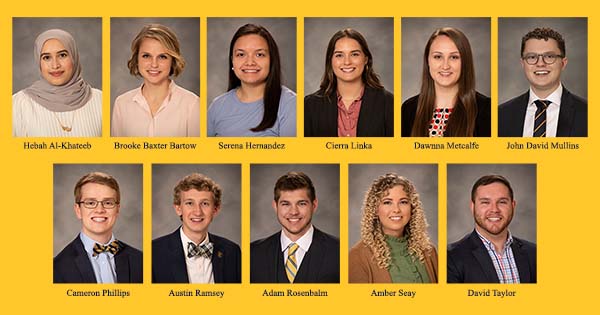 Named in commemoration of the year when ETSU was founded, the 1911 Society recognizes the university’s most notable graduates from undergraduate, graduate and professional programs. The selection committee evaluates applicants on academic achievement; sustained service; honors, awards, recognitions, publications and presentations; demonstrated leadership; work experience, such as study abroad, internships, externships and clinicals; and personal narratives.

ETSU President Brian Noland said, “For more than a century, ETSU has carried forth a mission to improve the quality of life for the people of this region.  The 1911 Society recognizes an elite group of graduates who have embodied that very mission.  We are delighted to honor these distinct members of the Class of 2021 throughout Commencement exercises this week.”

The 1911 Society was established in 2020. Honorees receive special recognition and tartan stoles to wear during Commencement. Their contributions and accomplishments will be showcased on the 1911 Society wall located on the third floor of the D.P. Culp Student Center.

“The 11 students being inducted into The 1911 Society have achieved great accolades in the classroom, in research laboratories and in service to this campus and our communities,” said Dr. Wilsie Bishop, senior vice president for academics and interim provost.  “Each has transformed ETSU in some way during their time at ETSU, and their selection is our way of celebrating the legacies they have established.”

Newest members of the 1911 Society

Hebah Al-Khateeb of Johnson City, Tennessee, is a University Honors Scholar and is graduating with a B.S. in microbiology and minor in public health and health administration. While an undergraduate student, she completed an honors thesis investigating the brain pathology that leads to depression and suicide, among other research projects with Quillen College of Medicine. Al-Khateeb also completed several volunteer internships at health care facilities in the region. In addition, she has held leadership positions, including vice president of the Multicultural Association of Pre-Health Students and student officer for the Young Physicians Initiative program. Al-Khateeb also spent time as a chemistry tutor and Supplemental Instruction leader on campus and completed the Emerging Leaders Academy.

Brooke Baxter Bartow of Jasper, Tennessee, is earning her M.D. from Quillen College of Medicine. Bartow is a lifelong Buccaneer fan. She earned her undergraduate degree from ETSU and as a member of the softball team earned the ETSU Academic Athlete of the Year in 2016 and 2017 and the Southern Conference Pinnacle Award for softball in 2017. While in medical school, she represented Quillen on the Organization of Student Representatives, the student-led branch of the Association of American Medical Colleges, and served as president of the organization locally. Most recently, she was inducted into the Gold Humanism Honor Society and the Alpha Omega Alpha Honor Society. Bartow is graduating at the top of her class and will complete a pathology residency at the University of Alabama at Birmingham.

Serena Hernandez of Morristown, Tennessee, is earning a B.S. in environmental health from the College of Public Health. For the past three years, she worked for the Department of Housing and Residence Life as a resident advisor for Buccaneer Ridge Apartments. In addition, Hernandez was a member of numerous organizations, such as Tradition Keepers, Sigma Alpha Lambda Honor Society and the National Residence Hall Honorary. She was a founding member and secretary for the Student Environmental Health Association and received the 2021 Department of Environmental Health Association Award. Hernandez also served as the undergraduate environmental health representative for the College of Public Health Student Council.

Cierra Linka of Greeneville, Tennessee, is passionate about serving her community. She wrote and published her own children’s book, “Peppy the Easy-Going Racehorse” based on her experience as an equine specialist. She is earning a bachelor’s degree in social work and has served as the Student Social Work Association president.  Additional campus involvement includes the Roan Scholars Leadership Program and serving as student representative on the ETSU Scholarship Committee. Other notable accomplishments are planning the ETSU Earth Day Fair, speaking at IDEAcademy, and interning as a substance abuse family specialist. Linka is a Young Life Leader and volunteers at David Crockett High School.

Dawnna Metcalfe of Bluefield, Virginia, is earning her PharmD from Bill Gatton College of Pharmacy. While a student, she was highly involved in volunteer patient care services and professional advocacy efforts. Metcalfe was active in the Tennessee Pharmacists Association, serving as the president of the Tennessee Society of Student Pharmacists. She also served in the American Pharmacists Association-Academy of Student Pharmacists. She helped train over 7,000 people to use the life-saving medication, naloxone, under the Generation Rx Committee. Through leadership opportunities and interprofessional education training, ETSU has prepared Metcalfe to be an agent of change within the pharmacy profession.

John David Mullins of Abingdon, Virginia, is graduating with a B.S. in microbiology. Fluent in Spanish and Portuguese, he has found creative ways to combine his passion for language and health during his time at ETSU. Through the Language and Culture Resource Center, he has worked as a medical interpreter at Remote Area Medical clinics and helped coordinate virtual language exchanges during the COVID-19 pandemic. He received the 2020 Critical Language Scholarship for Portuguese, the most prestigious foreign language award in the United States. He has used his knowledge of this language for research on his thesis, “A Comparative Study of Recovery Ecosystems for Opioid Use Disorder in Portugal and Appalachia,” a topic he will continue researching later this year in Portugal.

Cameron Phillips of Kingsport, Tennessee, is graduating with a B.S. in Special Education, while also completing a minor in music as a Bert C. Bach Fine and Performing Arts Scholar. During his time in the Honors College program, he completed a senior thesis that helped reveal the perceptions of Tennessee high school band directors teaching students with autism spectrum disorder. He was also involved in numerous on-campus musical ensembles as a saxophonist and section leader including Wind Ensemble, Buccaneer Brass and Marching Bucs. Additionally, Cameron was a dedicated volunteer with POP Arts (Power of Performing Arts) and Access ETSU, two programs that serve and support people with exceptionalities.

Austin Ramsey of Sullivan County, Tennessee, is graduating with a B.S. degree in information systems from the College of Business and Technology with a minor in business. Ramsey has been part of the Roan Scholars Leadership program and has held numerous leadership positions, including student trustee on the ETSU Board of Trustees, Student Government Association senator for the College of Business and Technology, President of the Entrepreneurs club, and as a leader on the National 4-H GPS/GIS Leadership team. A passionate entrepreneur, Ramsey currently owns and runs an information technology consulting firm, Pointech. He was recognized in The Business Journal’s 40 Under Forty in 2019.

Adam Rosenbalm of Blountville, Tennessee, is graduating with a B.A. in finance from the College of Business and Technology and a minor in storytelling. As a member of the Roan Scholars Leadership Program, Rosenbalm spent a summer serving with an education-based non-profit in Belize. His leadership positions on campus include secretary of allocations for the Student Government Association and vice president of the Entrepreneurs Club, and he was influential in helping pioneer a new series of events on campus centered on civil dialogue in politics. Rosenbalm is deeply involved in the entrepreneurial culture of the region and currently runs his own business. He was recognized in The Business Journal’s 40 Under Forty in 2020 and received a KOSBE award for New Business Excellence.

Amber Seay of Hobbs, New Mexico, is earning both a PharmD from Bill Gatton College of Pharmacy and a Master of Business Administration degree. During her time at ETSU, she served as a student ambassador for the Admissions Committee and was class secretary her second year. Seay has held several leadership positions, including public relations chair for Student National Pharmaceutical Association, Blood Service coordinator, and president of both Phi Lambda Sigma Leadership Society and Phi Delta Chi. She also served on a global mission trip and worked closely with an interprofessional health care team in Guatemala.

David Taylor of Dover, Tennessee, is earning his M.D. from the Quillen College of Medicine and Master of Public Health degree with a concentration in community health. He has served as Quillen Class of 2021 president for four years and was inducted into the Gold Humanism Honor Society last year, serving as vice president. Taylor has worked with curriculum transformation efforts at Quillen, served on the Quillen Admissions Committee for two years, and was co-president of the Pediatrics Interest Group at Quillen. His final field experience in the College of Public Health focused on increasing engagement of ETSU Health students with the homeless population in the Tri-Cities. Following graduation, he will complete a pediatrics residency at the University of Alabama at Birmingham.