Darack Nanto is many things. He’s an inventor, a graduate student, a personal trainer, an Olympic hopeful and a leader. He’s determined to show those in his home country of Togo that he can succeed at both his academic and athletic aspirations. Darack is building a prototype of his invention, the Eco Smart Can, while balancing his time between graduate classes and training to become an Olympic athlete. His goal is to become the first person from Togo to compete in bobsled skeleton at the winter games in 2022.

What was it like adjusting to life in the United States as an international student?

I had never been to the U.S. I came in the spring semester 2013 and it was really cold. I brought my jacket from home and it was not made for winter. When I was at the airport I asked my friend to bring me a winter jacket because what I had cannot hold me. I was frozen.

The other thing was getting used to the accents, “y’all” especially, and people were having a hard time understanding me so I had to work on articulating my words. I tried my best to integrate and learn as much as I can about American culture. 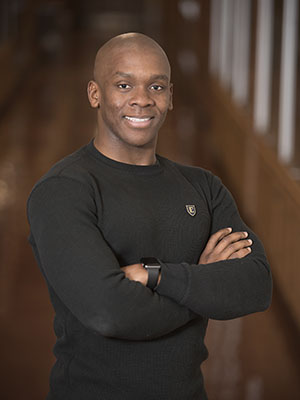 Last year, you won a business pitch competition at ETSU (iBucs). What is your invention and what phase are you at now?

One day I was walking to the CPA (Center for Physical Activity) and saw a maintenance guy emptying trash near Rogers-Stout Hall. The can was barely filled, but he emptied it and replaced the plastic bag and went to the next can. In my head, I thought, “Those cans have almost nothing inside. Why would you empty it?” As an engineer, in my head, I was thinking why. It seemed like a waste of time and resources. Is there a way that we could know the trash level before so we don’t have to collect the trash if it’s not needed?

I started researching and applying for funds for startup and to get the equipment to develop it. To track the level of trash, I am using IOT (Internet of Things) technology and I had to start learning about it. We learned main electronic components in the manufacturing engineering technology program, but this is different because you take normal hardware and try to make it talk to the internet. I had to really start researching online, troubleshooting, failing at it, and trying and trying again. I first had a basic version for my undergraduate honors thesis.

After winning the competition, other people on campus discovered my project and the College of Business and Technology took an interest in it, and I went to an entrepreneurship conference in Nashville and talked to other people with startups across Tennessee. I really got inspired. I invested in books and equipment. Right now I’m working on a prototype with a solar panel and a compactor inside, which will be fully automated. It can identify and compress the trash at certain levels. When the trash is at 50 percent filled, it can compact it to around 30 percent.

When you’re not working on the Eco Smart Can prototype in your lab in Wilson-Wallis Hall or studying, what other activities are you involved in?

Currently, I’m president of the Muslim Student Association and if I’m not in the lab, I try to work with the association, or because I am an athlete as well, I will be training. I’m hoping to represent my country Togo in the next Winter Olympics in the sport of bobsled skeleton. So if I’m not in class or in the lab learning, I’m in the CPA working out or in the Ballad Health Athletic Center (Mini Dome) training.

I’m also a personal trainer, so during the summer I work at the CPA to help people reach their fitness goals or who want to stay fit. I am also a Presidential Ambassador for the university. 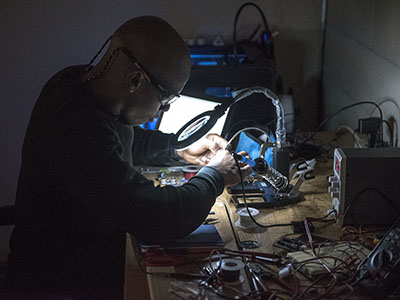 How did your Olympic dream begin?

I grew up playing sports, mostly martial arts, and I was a goal-keeper in high school. When I came to ETSU, I wanted to join a team, but I couldn’t commit the time. Then I started on a workout journey and I just wanted to be a fit man and work hard. People started noticing me. I always had a dream to be an athlete, but sometimes people think that you can only do one thing – academics or athletics. What if I can be well-rounded? What if I can have degrees and still be an athlete?

I started noticing that the younger generation coming now, they always get this thinking process that because I didn’t do this or grow up here or have a certain type of background that I can’t dream big. I just want to start this bobsled journey and compete in a winter sport even though I am from a country in the continent of Africa and we don’t have snow. I want to do a sport that’s not even offered in my country to show to the younger generation that you can dream big. It doesn’t matter where you come from, you can achieve whatever you put your heart into and you work on. That’s what’s pushing me and motivating me to try to do the Olympics and represent my country. Hopefully, with my hard work and support from friends and family, I’ll be at Beijing in 2022.

Has the Olympic Training Site at ETSU influenced your decision to train for bobsled skeleton?

I wanted to become a weightlifter, but my country does not have a weightlifting federation so it was really hard to make it happen. The Olympic Training Site played a role because there are people here who know what they are doing. You see international and U.S. athletes coming to train here.

What’s the next step in your journey and what do you hope to accomplish?

Right now I’m doing all the strength, conditioning and sprinting, and January will be my first time sliding on the ice. I’m going to a driving school in Utah. They have a training school for international athletes. Finances are the next step. It’s a small sport and expensive. I believe I have the drive, the motivation and the strength to make it happen. I’m building from scratch. I have to get the equipment on my own. I hope people will believe in me and invest in me so I can prove you can dream big and I can make it happen.

In May 2019 I graduate with my master’s in technology with a concentration in engineering technology and a certificate in business administration. I would like to invest my time to develop a company to sell and advertise the product (Eco Smart Can). My ultimate goal is to inspire the younger generation that you can do whatever you want to do as long as you put time and effort into it. Because of my field of study in manufacturing I have a lot of options and I can almost work anywhere. It really depends on the opportunities that happen.