JOHNSON CITY (Dec. 20, 2018) – East Tennessee was once home to a stunning diversity of remarkable animals, including rhinos, tapirs, mastodons, alligators and more.  Scientists know all of this thanks to the fossil-rich clays of the Gray Fossil Site, which preserve an ancient ecosystem that dates back around 5 million years.  At that time, the site was a large pond surrounded by a lush forest.  Now, East Tennessee State University scientists have found another animal to add to the picture of this ancient ecosystem: peccaries.

Peccaries may look like pigs, but they are not.  True pigs, members of the family Suidae, are native to Europe, Asia and Africa, while peccaries belong to the family Tayassuidae and live in the Americas.  In some places, they are also known as javelinas.  Like pigs, they are medium-sized omnivorous animals with small tusks. 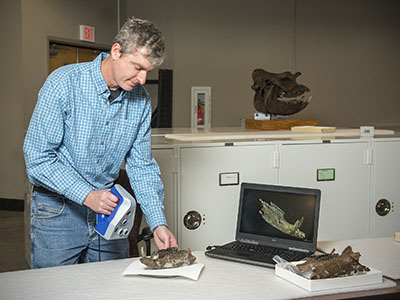 Crew members at the Gray Fossil Site have been pulling up peccary bones for many years, but a new study has revealed that these fossils belong to two different extinct species of peccary that roamed the ancient forests of Tennessee: Mylohyus elmorei and Prosthennops serus.  These peccaries were identified by well-preserved remains of their skulls, including nearly complete lower jaws of both species.  They would have been about the size of a German shepherd, which is a bit larger than modern-day peccaries.

These findings are particularly exciting since neither of these species has ever been found in this part of the country before, according to Dr. Chris Widga, head curator at the ETSU Museum of Natural History at the Gray Fossil Site.  Prosthennops serus has been found in fossil sites around the United States, but never before in the Appalachian region, and Mylohyus elmorei has only been found in one region of central Florida, more than 900 kilometers to the south.

“Details of the peccaries’ teeth,” Widga says, “suggest they spent their lives browsing on the leaves and fruits of succulent plants, so they would have been right at home in the Gray Fossil Site ecosystem, which we know from plant fossils was rich with tasty vegetation.”

This research was published in the journal PeerJ by two alumni of the ETSU paleontology graduate program in the Department of Geosciences, Evan Doughty and Lauren Lyon, who worked alongside two Gray Fossil Site paleontologists, Drs. Steven Wallace and Blaine Schubert, who are also ETSU professors.