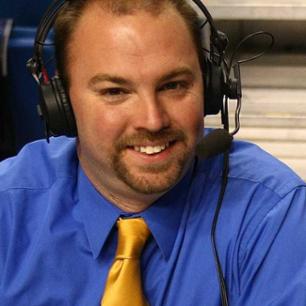 Jason Sandos graduated from ETSU in 2000 with an bachelor’s in broadcasting, and in 2017, he returned to earn his master’s in Digital Marketing. As the current “Voice of the Bucs,” Sandos is entering his 16th season behind the microphone and in front of the camera. A veteran of broadcasting, Sandos served as the radio voice for local high schools such as Tennessee High and Dobyns-Bennett, while also serving a stint with the Florida Gator Network from 2000-01. While in Florida, Sandos also worked play-by-play at the prep level and hosted a daily call-in show. Originally from Hendersonville, North Carolina, Sandos also served his country as a member of the U.S. Army Reserves for 12 years. He is a veteran of Operation Iraqi Freedom, where he was stationed at Camp Bucca, Iraq, from January-November 2004. Sandos is married to Sunny Ricker Sandos. Together, they have a daughter, Jacey, and twin boys, Rhett and James.