John H. Poteat Chair of Banking, Professor of Finance,and Director of the Center for Banking 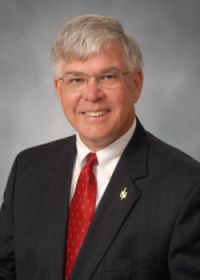 Dr. White received his undergraduate degree in Economics from Mississippi State University, his MBA, with a concentration in Finance, and his Ph.D. in Finance both from the University of Georgia. A Vietnam-era veteran, Dr. White received a commission in the U.S. Navy following his undergraduate education and completed two sea tours. Upon completion of his active duty, he entered the banking business in Monroe, Georgia, and was engaged primarily in commercial lending and branch administration. After completing his graduate education, Dr. White launched his academic career at the University of South Alabama, where he created a banking concentration, developing and teaching all of the banking-specific courses. He then returned to his alma mater, serving as a finance professor, Director of the Banking Excellence Program, and Chair of Real Estate. During his tenure at Mississippi State, he authored or co-authored over fifty books, articles, and manuscripts dealing with various topics in banking and finance. He also chaired and/or served on more than twenty-five dissertations. In August, 2007, Dr. White was appointed the John H. Poteat Chair of Banking, Professor of Finance, and Director of the Center for Banking at East Tennessee State University.

Since his arrival at ETSU, Dr. White teaches the banking courses and the Business Finance course at the undergraduate level, as well as the graduate level Applied Corporate Finance course. Additionally, he serves as a curriculum developer and instructor for the Southeastern School of Consumer Credit. He is also sought after to speak to civic and professional groups on various banking and finance topics. He has also been a guest on the local radio program "Business Matters" and regularly gives interviews to local, regional, and national media.

Dr. White resides in Johnson City, TN, with his wife Louise. They have two grown children and six grandchildren.