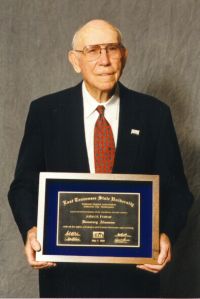 John Howard Poteat, the first child of F.B. "Bela" and Viola (Phillips) Poteat of Jonesborough, Tennessee, was born in Bakersville, North Carolina, on December 1, 1912. He passed away on June 17, 2006. Mr. Poteat had a successful career in a variety of business opportunities, and always looked forward to meeting business challenges in farming, banking, and real estate development.

Grandson John Olds says, "Granddaddy represents the best in the tradition of American entrepreneurship." All the elements of this theme are contained in a story from his high school days. The Poteat family farm was producing milk and selling it to Pet Milk Company for one dollar per 10-gallon can. Young John Poteat felt they could do better by delivering directly to the homes in Jonesborough and selling this milk for 10 cents per quart. Arranging with his father for the necessary bottles and the use of a truck, John began rising even earlier in the mornings, bottling and loading the milk, and delivering it to customers in town. He soon acquired more customers for the rich Guernsey milk with a large head of cream floating in each bottle. At time, he also left a little something extra, such as farm apples, with his deliveries. Eventually, his competition withdrew, and he was making all the milk deliveries in Jonesborough. He saw a need, recognized an opportunity, took action, delivered a quality product, and beat the competition at service. These elements have been repeated in his many other business ventures since that time.

When John attended State Teachers College in Johnson City, he paid tuition with egg money from the farm. By taking extra coursework in summers, he finished his preparation for medical school in just three years. He then began studies at UT medical school in Memphis, but, during the first year, without funds for food or schooling, he was forced by the conditions of the Great Depression to return home and seek employment. His first job was at Tennessee Eastman for 27 cents per hour.

Marriage to his sweetheart, Ruth, and the birth of their daughter, Betty, added another dimension to John's life and formed a closely knit family that eventually grew to include two grandchildren and two great-grandchildren.

Some years later, while visiting his grandmother in Spruce Pine, North Carolina, he bought an ice cream cone at the local drugstore. It was only a small cone and cost a nickel. Again he recognized a need and saw a great business opportunity. He furnished a small building as a production and sales site, obtained ice cream mix from his employer, Pet Dairy, hired a staff, and began selling double-dip ice cream cones for a nickel. Although he had a full-time job, he went to Spruce Pine on weekends (weekend business was especially good) to work at night freezing the ice cream and then by day dipping and selling it.

Still later, he began his career in the oil business, both in retail and wholesale operations. Living in Kingsport and working for a man with a successful oil business, he felt he could do better operating on his own. Against the advice of his friend and employer about the difficulty of making it go on his own, he began an oil operation. Many times he made sales contracts on small margins and demanding schedules but worked hard to meet customer requirements. He was frequently called on weekends and late at night by people who had just run out of heating oil or other products. By meeting such needs quickly when no one else would, he built a growing base of loyal customers. John saw need and business opportunity, took action, and outworked the competition.

In a 1973, conversation with another prominent Kingsport businessman, W.B. Greene, Sr., the topic turned to the need for a local bank. A friend of theirs had been unable to obtain a needed loan locally, and Mr. Greene had helped to get the money from a North Carolina bank. John said, "We could start our own bank," and after some study, they did just that. The Bank of Tennessee initially had six employees and one trailer, and it sold stock to obtain $1.8 million in assets. Today, there are 200 employees and $664.1 million in total assets. John Poteat continued to serve as Director and Honorary Vice Chairman of the Board for the Bank of Tennessee and BancTenn Corporation until he died, using his business experience and knowledge to guide the process of expanding bank operations and making loans to meet the financial needs of the area.

After having provided well for his family, even including the creation of trust funds for the education of his great-grandchildren, John responded to his own need to build upon his history of community and church service by "giving back" with some of the results of his success. He focused on his church and on education. Tuition can no longer be paid with egg money from most family farms, but he understood the importance of making local quality education affordable to all students. Having experienced hard times himself, he wanted to help avoid them for other deserving students willing to apply themselves to getting an education. Acting upon this interest in education and his experience in banking, he took a leadership role in the development of a Chair of Banking at his alma mater, East Tennessee State University. Thanks to his leadership and generous financial support, that chair is now a reality - the John H. Poteat Chair of Banking.

If he were here today and asked for a capsule of advice for today's forward-looking ETSU student, he might say: For a better life, persevere in your education. Work hard for your employer, client, or customer; keep your commitments and deliver more; anticipate needs and outdo your competition. Enjoy the satisfaction of a job well done. Repeat for decades.