JOHNSON CITY (Jan. 23, 2020) – A patient experiences cardiac arrest, also known as a “code blue,” while his worried wife stands by his hospital bed. Physicians, pharmacists, nurses and respiratory therapists rush to his side and begin lifesaving measures, quickly working together to stabilize the patient.

Recently, this scenario played out in a simulation environment for students from East Tennessee State University’s health sciences colleges. 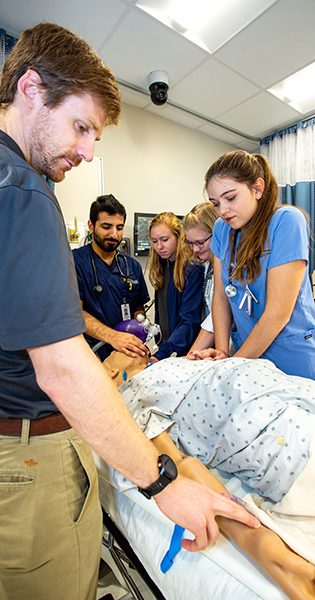 ted in ETSU’s Interprofessional Education and Research Center (known as Building 60) on the VA campus.

The students’ “patient” was a high-fidelity simulation manikin whose vital signs could be manipulated by technicians behind the scenes. A standardized patient played the role of his distraught wife to add another level of realism to the situation. The students from the various health sciences disciplines worked together as a team to navigate the intricacies of the situation to save the patient’s life, just as they would in a real medical emergency.

Skills like communication, trust and teamwork were paramount to completing their task, according to the participants.

“There is no way to undersell it – teamwork is incredibly important,” said Justin Pinkston, a fourth-year medical student who participated in the inaugural IPE simulation. “The code situation is a testament to that because if there is no teamwork, there is no way the patient could have survived.”

While the students worked on the patient in the simulation lab, other students, faculty and leaders from the health sciences colleges viewed the action as it streamed real-time on monitors in nearby debrief rooms. After it concluded, the participants came together to debrief as an interprofessional team, and then broke into their specific colleges/disciplines for additional debriefing specific to their profession.

“It was pretty exhilarating,” said Christie Monahan, a fourth-year pharmacy student. “I thought we worked really well as a team, but also highlighted some areas for improvement. It was a good learning experience for all of us.”

“We’re going to the next level,” said Dr. Caroline Abercrombie, an assistant professor at Quillen College of Medicine who helped organize the pilot IPE simulation.

Abercrombie, who recently participated in a national presentation about ETSU’s IPE program, noted that ETSU is fortunate to have a building and thriving program dedicated to interprofessional education – something not all universities have.

“It’s very rare that you have five health sciences colleges on one campus,” she said.

Faculty and administration hope to further develop the IPE code blue simulation, eventually making it a staple of the thriving IPE program curriculum.

“We talk to employers out there in the health care systems, and what they need and are looking for are people who are ready-equipped to work on a team,” said Dr. Brian Cross, director of ETSU’s Interprofessional Research Center and associate professor in Bill Gatton College of Pharmacy. “We at ETSU are really fortunate that we have a culture that cultivates the value and importance of working in teams.”

Cross emphasized the importance of IPE to help reduce medical errors. Some of the most common root causes of medical errors are communication problems, inadequate information flow, organization transfer of knowledge and work flow issues, according to a report by the Agency for Healthcare Research and Quality.

“The reason (for many medical errors) is not because people don’t know what they’re doing; it’s because they don’t communicate what they’re supposed to be doing,” Cross said. “We are trying to create an environment of trust and teamwork. This environment elevates everyone’s training. This is where we are going; the future of health care requires this.”