The national competition, sponsored by HanesBrands, challenged graduate and undergraduate students with real world scenarios based on the Champion Brand to test their analytics skills. Members of the ETSU team are Aaron Barlow, a native of Knoxville studying computing with a concentration in information technology; Dawson Maddox of Chattanooga, who is completing an undergraduate degree in mathematics and chemistry while pursuing a master of arts in teaching; and Jessica Owens, an MBA student from Knoxville who holds degrees in communication and marketing from ETSU. 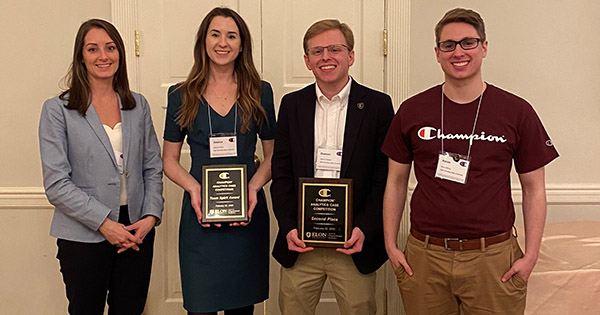 In advance of the competition, teams were presented with a problem and data set that included historical Champion sales data. Based on this information, the teams were asked to develop estimated sales patterns and projected demand for 20 new products during a 13-week period, including a full analysis of the projected performance of the products. Teams were also asked to submit “hype videos” to promote the talents of team members and bring awareness to the competition. ETSU won the Team Spirit Award for its hype video, which had over 400 Facebook shares.

On the first day of competition, each team gave a 15-minute presentation to a panel of judges and four teams were chosen to compete in the next round. In the final round of competition, Barlow, Maddox and Owens had two and half hours to solve a new problem using the projected data from round one. Winners were selected based on the solutions presented.

Villanova finished first, followed by ETSU, William and Mary and UT Knoxville.  HanesBrands has sponsored an analytics case competition at Elon University for several years, but this was the first time the competition was opened to other schools.

“I am so proud of our students. They worked extremely hard through several ‘all-nighters’ to prepare for the competition,” said Dr. Dana Harrison, assistant professor of management and marketing and faculty advisor for the ETSU analytics competition team. “This is a great example of what students from different disciplines can achieve when they work together to formulate solutions to real business problems.”