JOHNSON CITY (July 22, 2020) – For the past 10 years, East Tennessee State University’s College of Public Health has been part of a global health collaboration that has improved the quality of life for citizens in underserved communities around the world. In 2009, the global health nonprofit Hope Through Healing Hands launched the Frist Global Health Leaders (FGHL) Program, which provides volunteer services and builds self-sustaining caregiver capacity in underserved communities. ETSU’s College of Public Health has been a partner from the beginning. 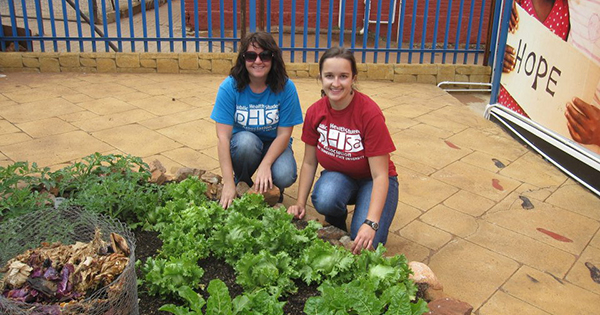 “The global impact of the Frist Global Health Leaders program is remarkable,” said Dr. Randy Wykoff, dean of the College of Public Health. “What is most impressive, and most important, is that both the host communities and the students themselves benefit tremendously.  In several cases, the internships have led to long-term partnerships.”

One such long-term partnership began during the summer of 2011 when Megan Quinn and Twanda Wadlington, who were at that time doctor of public health students at ETSU, completed their field placements with Project HOPE United Kingdom’s Thoughtful Path in Munsieville, South Africa.

Prior to the students’ arrival, people of Munsieville said that they would like for their communities to be able to grow their own food. Women in the community, which has a large population of immigrant families from neighboring countries, wanted to be able feed their own families and to grow additional food to feed vulnerable children in the community.

Quinn and Wadlington explored the best approaches to starting small family gardens that would work in this region of the world. They identified keyhole gardens as a fairly simple approach that had worked in other parts of sub-Saharan Africa.

The Thoughtful Path: Munsieville brought women from the community together to come up with a plan to help each other build gardens in the community. A total of 74 women attended the initial meeting. Through their efforts, 12 gardens were built that summer. 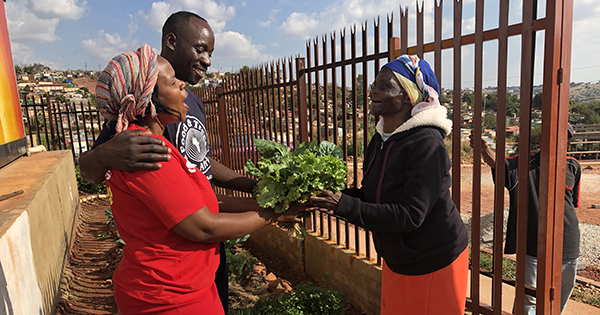 A year later, two additional ETSU College of Public Health students, Courtney Stanley and Sarakay Johnson, completed their internships in Munsieville.  They were asked by the local project director to continue the keyhole garden project, expanding into another area of Munsieville, the community of Mshenguville, and to explore other methods to develop small-scale gardening.

Since these initial efforts were implemented, the garden projects have greatly expanded and have become an important project for The Thoughtful Path: Munsieville. The garden project was re-invigorated in 2016 with an approach to introduce permaculture principles to the community and link it to the newly founded Hope Park nutrition unit. The garden project is now partnering with an organization called “Food and Trees for Africa” and Checkers, a local grocery store. Through this partnership, close to 400 volunteers in Munsieville will receive monthly permaculture workshops in Hope Park over an 18-month period.

To date, over 300 individual gardens at community members’ homes have been developed.  A large community garden has also been established in the Mayibuye neighborhood of the community.  The community garden is home to the permaculture workshop and will supply produce for Checkers grocery store in the future.

While the communities benefited from the gardens, Quinn, who is now a faculty member at ETSU, says the program was formative to her life, as well.

“My experience in South Africa provided direct, immediate impact on my education and has continued to impact my career since then,” Quinn said. “The Frist Global Scholar program provided the initial opportunity for me to work with Project Hope United Kingdom’s Thoughtful Path: Munsieville Program and served as a foundation for an ongoing, impactful relationship with the organization.

With support from William Kenneth “Big Kenny” Alphin from the country duo Big & Rich, the FGHL program also supported the ASPIRE Appalachia scholars program. ASPIRE stands for “The Alphin Scholarship to Promote the Integration of Research and Environmental Education in Appalachia.”

“These programs have equipped our students to tackle global health challenges, and they have made a difference in the lives of countless individuals across the world,” Wykoff said. “I look forward to what we can do together in the next decade.”