Austin Ramsey’s world revolves around “crushing boxes.” He uses this analogy often when engaging with clients for his consulting business, Pointech, and to define his leadership philosophy. Obviously, Austin is doing more than programming his way through the information systems curriculum at East Tennessee State University. He says each opportunity to lead, learn and grow is a building block toward new experiences and even bigger opportunities, like being a member of the National 4-H GPS/GIS (geographic information systems) Leadership Team or the youngest person to receive the 40 Under Forty recognition from The Business Journal of Tri-Cities Tennessee/Virginia a short time after being named an inaugural Appalachian Highlands Twenty Under 20 award recipient. 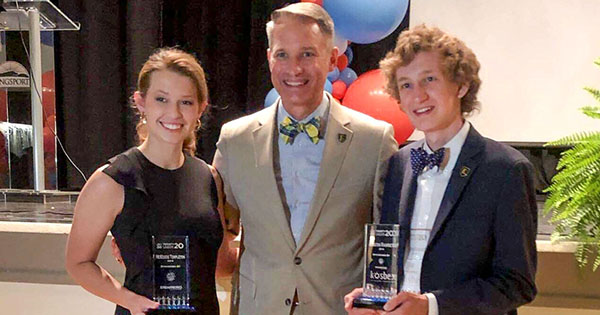 “When you build a business, you put all this time and effort into it, so I was truly honored and consider these awards confirmations that I am on the right path. Now I can continue to ‘crush new boxes’ and grow and hopefully launch another business at some point,” Austin said.

During his senior year at Sullivan Central High School in Blountville, Austin was nominated for ETSU’s Roan Scholars Leadership Program. He progressed through a very competitive interview process and was selected to the Class of 2021. As a young entrepreneur, Austin often seeks the wisdom of business owner and Roan founder Mr. Louie Gump. He says this connection confirmed he was “in the right place” at ETSU.

From lemonade stand to DJ business, providing droneography services and aerial consulting and now offering technology solutions for businesses, Austin is already putting his minor in business management to use.  As “Chief Box Crusher” and founder of Pointech, Austin works with regional business owners to “crush the IT box.” IT infrastructure and security assessment is in high demand this year as the business world has experienced an unexpected shift to remote work. More than once, Austin says he’s made an appointment to meet with a new client in person and caught a strange glance the first time they see his 21-year-old face.

Austin is unfazed by whether someone thinks he is old enough to own his own business, or to represent the entire student body on the ETSU Board of Trustees. He just keeps on “crushing boxes.”

Austin is a senator in the Student Government Association and was also selected to serve as Student Trustee. In this role, Austin is a member of the ETSU Board of Trustees and actively participates in the shared governance process for the institution.

“I really try to be a voice for students and to go back to the SGA and let them know what policies are being implemented,” Austin said. “Especially during this challenging year, I feel I have an important role in helping students understand and translate the decisions being made and their impact. It’s been a great learning opportunity to see how the Board of Trustees governs the institution.”

It is probably no surprise that Austin is actively involved in ETSU’s Entrepreneurs Club and as a member of the National 4-H GIS Leadership Team he conducted award-winning geospatial research using GIS to map sets of health data. In 2018, he traveled to Haryana, India, to assist with infrastructure development as part of his summer of service with Roan Scholars. That same year, he was one of the thought leaders chosen to present at IDEAcademy, a leadership development series hosted by Eastman and ETSU College of Business and Technology, where he talked about using droneography and geographical data to help identify big picture trends and patterns.

“Being involved in business is part of my DNA,” Austin said. “I discovered that everything we have in life we can put into a box and in order to grow and expand, it’s about crushing the box and seeing things in a new way. I’ve translated this into how I work with other businesses by challenging them to think about their problems as boxes – What is the bottleneck in your business? Don’t be afraid to crush it.”