This national prize sweepstakes focused on positive things that may be spread – like joy to others – giving students across the United States the chance to win one of 30 $500 donations made in their names to the campus food pantry or local hunger-related charity of their choice. According to Sodexo, “this comes at a time when food pantries are deeply in need of donations, given the COVID-19 environment.” 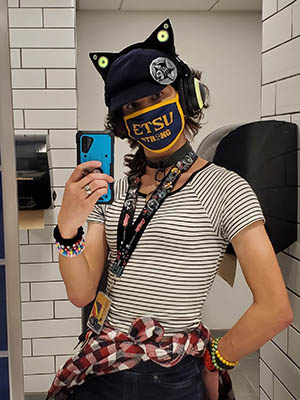 Featured at more than 600 colleges and universities nationwide whose dining services are managed by Sodexo, the company’s fall resident dining promotion featured a number of safe, physically distant events for students in addition to the “Spread the Joy Sweepstakes.” Two core dining showcase events, #RockTheBlock and Foodie Revolution, celebrated the beautiful outdoor weather and capitalized on the historic 2020 election with themed foods, activities and more.

Daniels selected Good Samaritan Ministries of Johnson City as the local charity she wished to receive the $500 donation. In addition to this donation, Daniels will receive a $100 VISA® gift card to spend any way she would like.

Daniels is a freshman from Crossville majoring in digital media with a concentration in video game design. She says that because she is new to ETSU and the Johnson City area, she was unfamiliar with local charities, and so she asked a trusted professor for recommendations.

“From my understanding, he’s done some volunteer work for the Good Samaritan Ministries in the past, so I was comfortable in knowing that the donation would be going to an organization that I could rely on,” she said.

The monetary donation from Sodexo, along with 150 meals donated by ETSU to feed those facing food insecurity in the community, were presented to Good Samaritan officials earlier this month.

“We are so grateful to be chosen for Sodexo’s ‘Spread the Joy Sweepstakes’ as part of its fall resident dining promotion series,” Aaron T. Murphy, CEO and executive director of Good Samaritan Ministries, wrote in an email to Kelvin Tarukwasha, general manager of Sodexo Dining Services at ETSU. “We are blessed that Quinn selected Good Samaritan as a beneficiary of these funds to serve the needs of our community. We will continue to combat poverty and change lives here in the Upper East Tennessee Region.”

Sodexo Inc. (sodexoUSA.com), the leading Quality of Life services company in the U.S., Canada and Mexico, delivers on-site services in corporate, education, health care, government and remote site segments, as well as benefits and rewards services and personal and home services. Headquartered in Gaithersburg, Maryland, Sodexo Inc. funds all administrative costs for the Sodexo Stop Hunger Foundation (HelpStopHunger.org), an independent, charitable organization which, since its founding in 1999, has made more than $22 million in grants to end childhood hunger in America.