This competition, created at the University of Queensland, Australia, provides graduate students the opportunity to develop professional presentation and research communication skills. Participants condense complex research projects into engaging, three-minute presentations designed for a general audience using just one slide. Audience members learn what students in master’s and doctoral programs are studying and gain insight into the future of research, design and innovation in a variety of disciplines. 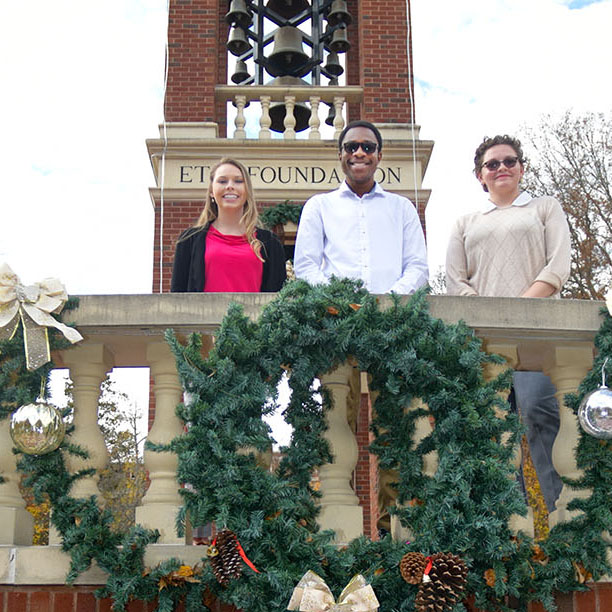 Napier is a master’s degree student in Communication and Storytelling Studies.
“The goals of my research are to better understand what students say and do to build these relationships and create an academic measure to represent those behaviors,” she says.

Napier earned a B.S. degree in Communication Studies at ETSU, which she says inspired her goal to continue her education in the graduate program. She also holds an A.S. degree in Speech Communication from a community college. “It was my relationship with my advisor there, an individual who constantly encouraged and supported my academic goals, that sparked my interest in my research topic,” she says.

Second place in the ETSU competition went to Anna Musket, whose thesis is titled “Glioblastoma: in vitro studies.” Her research stems from a deeply personal time in her life. “The week I graduated high school, my mom was diagnosed with terminal breast cancer. She made it eight months, five months longer than the most generous estimate of her lifespan. That was when I started studying cancer.”

Musket, who is currently a doctoral student in the ETSU Department of Biomedical Sciences, started working with Dr.Qian Xie. “Under her tutelage, I have learned a great many things. For example, the rate of survival for breast cancer patients is now significantly higher than it was when my mom was diagnosed. I am studying glioblastoma, a rare but terminal cancer diagnosis. Part of what makes glioblastoma so deadly is that the tumors tend to recur, even if they were successfully treated,” she says. Additionally, Musket adds that glioblastoma tends to become treatment-resistant. “I am taking regrown tumors, and tumor cell lines, from human glioblastoma patients, and I am using those to characterize several common alterations that occur in MET in glioblastoma,” Musket added.

She earned a B.S. degree in both Biology and Chemistry after entering ETSU as a transfer student, and holds three associate’s degrees from Northeast State Community college; an A.A.S in Forensic Science, an A.S. in Criminal Justice and an A.A.S in Public Safety and Justice Administration.

Michael Tetteh received the People’s Choice Award, voted on by viewers. His thesis is “Folic acid-Carbon dots-Doxorubicin Nanoparticles as Cancer Theranostics.” In his research, Tetteh says he aims “to overcome the limitations of chemotherapy by engineering a biologically compatible vehicle that could safely transport cancer drugs to cancer cells, significantly reducing the side effects that come along with chemo-treatment.”

Tetteh says his research focuses on “site-specific targeting by using non-toxic nanoparticles called Carbon Dots (CDs), attached to Folic Acid (FA), to deliver the anticancer drug, Doxorubicin (DOX) to cancer cells using a vehicular system named FA-CD-DOX.” Additionally, Tetteh aims to bring hope to people who suffer from cancer, including a friend he says is currently undergoing chemotherapy. “Surviving cancer is not the end of a gruesome story. It is the beginning of a beautiful one,” he says. After graduating from the University of Cape Coast, Ghana with an undergraduate degree in Biochemistry, Tetteh is pursuing a master’s degree in Chemistry at ETSU.

This is the fourth year ETSU has participated in this international competition, and the participating students gave their presentations in-person in the Martha Street Auditorium in the D.P Culp Student Center. By winning top honors in ETSU’s 3MT® event, Napier will represent ETSU in the virtual Southern Regional Competition during the Conference of Southern Graduate Schools 2022 Annual Meeting in February. A donation from Tennessee Hills Brewing and Distillery will result in a $1,100 scholarship for the first place winner, and a $750 scholarship for both the second place and people’s choice recipients.