Hornberger fell in love with the beauty of the campus and felt a special connection to the Department of Communication and Performance.

“I did not know it at the time, but the speech and debate team was a gateway to my love for communication research,” she said. “I was so overwhelmed by how welcoming everyone was.”

Entering her senior year at ETSU, the accolades she has accumulated as a speech and debate team member are impressive. 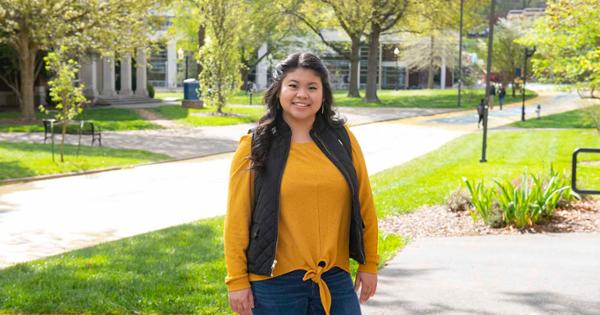 A year earlier she won an oral interpretation competition at Carson-Newman University.

“I can easily say being part of the award-winning speech and debate team has been the most impactful part of my journey here at ETSU,” she said.

Yet for Hornberger, it goes beyond winning awards. The connections she has made, with students and faculty, have been critical.

“Being backed by the department, it is so rewarding,” she added. “I get to turn this extracurricular activity into something that I will take with me after I get my degree.”

Her activities extend beyond the speech and debate team.

Hornberger, who expects to graduate in May 2023 with a degree in communication studies and a minor in radio/TV/film, is a member of the Phi Kappa Phi’s honor society. She’s involved with the university’s TEDxETSU, plus she’s a Fine and Performing Arts Scholar through the ETSU Honors College.

She still reflects fondly on her high school trip to ETSU.

“I remember thinking: ‘I think I could see myself being part of this community,’” she said.