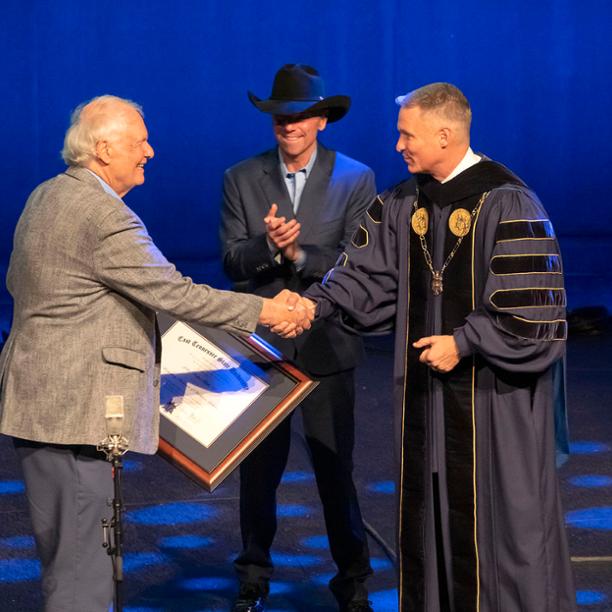 “Jack’s impact on the music industry goes back even before his time at ETSU,” said Dan Boner, program director of Bluegrass, Old-Time and Country Music Studies, of Tottle’s impact. “He had already influenced a musical generation with his recordings for Rounder Records and a best-selling mandolin instruction book. He then arrived on campus 40 years ago, making a welcoming place for musicians who were interested in serious and exclusive study of bluegrass, old-time and country music.”

Tottle, who founded the program in 1982, travelled from his home in Hawaii to accept the honor.

“It’s wonderful knowing Kenny and Jack wanted to be here for each other,” added ETSU President Dr. Brian Noland. “Their friendship and the bond that ETSU creates remains strong after all these years.”

Kenny Chesney, who defined 21st century country music with stadium tours, the most Billboard Country #1s and eight Entertainer of the Year Awards, graduated from ETSU in 1990. In addition to being on hand to celebrate program founder Tottle’s receipt of his honorary degree, Chesney was presented an honorary doctorate recognizing his ongoing commitment to his music, the future of country and bluegrass music, and No Shoes Nation, the millions of fans who have found their lives inside his songs.

“When I was just beginning to really get serious, Jack Tottle was 10 years into this incredible program that focused on the region’s musical roots,” the only country artist in Billboard’s Top 10 Touring Acts of the Last 25 Years for the last 13 years explained. “He welcomed me, taught me a lot about songs, being in bands and what this music is made of. He took a bunch of us kids – several went on to play with Alison Krauss and Union Station – to Russia as part of a cultural exchange, teaching us how music builds a bridge places you can’t imagine.

“So, it was my honor to honor Jack this way. He showed an East Tennessee kid the power of what music can do; and for me, it sure did.” 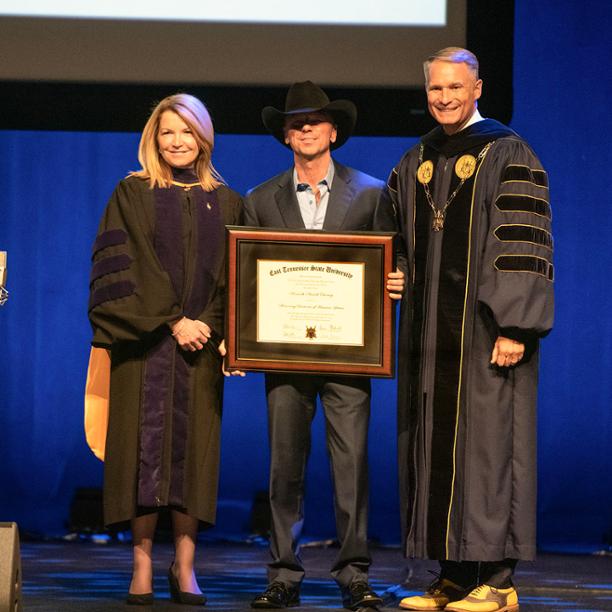 “ETSU presents honorary degrees to those individuals who have reached the extraordinary heights of their profession or field,” Noland explained. “These honorary doctorates reflect, among Kenny Chesney’s many achievements, the sustained success of his students and inspiration for faculty, staff and students. Kenny Chesney embodies that and so much more.”

The Oct. 21 concert was held at the ETSU Martin Center for the Arts, starting with a VIP reception at 5:30 p.m.