Jim and Mary B. Martin's impact on arts in the region

James C. “Jim” Martin, a 1947 graduate of University of North Carolina at Chapel Hill with a degree in chemistry, began his career as a junior research chemist with Eastman Kodak, a division of Tennessee Eastman. Becoming a research fellow in 1982 and rising to director of the Chemistry Research Division, Martin found new ways to improve Eastman’s processes for raw materials, authoring or co-authoring more than 100 U.S. patents as well as several foreign patents.

Mary Beard, a lifelong resident of Johnson City, met Jim Martin during her own 44-year career at Tennessee Eastman Co. in Kingsport. She began there as a laboratory technician, then went on to earn a bachelor’s degree in chemistry from East Tennessee State University in 1962, studying nights and weekends while working full time at Eastman. As a research chemist, doing exploratory work in new polymer systems, Mary B. Martin was awarded two U.S. patents.

Married in 1966, the Martins were well-known patrons of the arts in the region, as well as being artistic and creative people themselves. Mary B. Martin died in 2008. In early 2009, Jim Martin visited the dean of ETSU’s College of Arts & Sciences, expressing his wish to endow an arts program, to start an arts legacy in memory of Mary.

Associate Dean and Art & Design faculty member Anita DeAngelis had an idea for an eclectic program, offering semester-based “seasons” of events of every possible genre of creative artistry – with the additional purpose of providing a focal point and recognition for the arts at ETSU. Approval for the school was granted by the Tennessee Board of Regents and the Tennessee Higher Education Commission and DeAngelis became the School’s first director.

Martin said his goal in financially supporting the ETSU School of the Arts, local symphony orchestras, the International Storytelling Center and other regional arts programs, was to “weave a tapestry” of arts organizations and events to form an influential presence in the region.

Thus, the Mary B. Martin School of the Arts was born in 2009, and since then, it has offered music concerts, theater, dance and storytelling events, film screenings, lectures, exhibitions, visual artists, public art projects, comedy and illusion from around the globe.

As talks about a local arts center surged about that same time, Martin and his and Mary's daughter, Sonia King, and other longtime arts supporters in the region joined forces and funds with the city, county, university and state of Tennessee to finally make the arts center dream a reality in Johnson City. 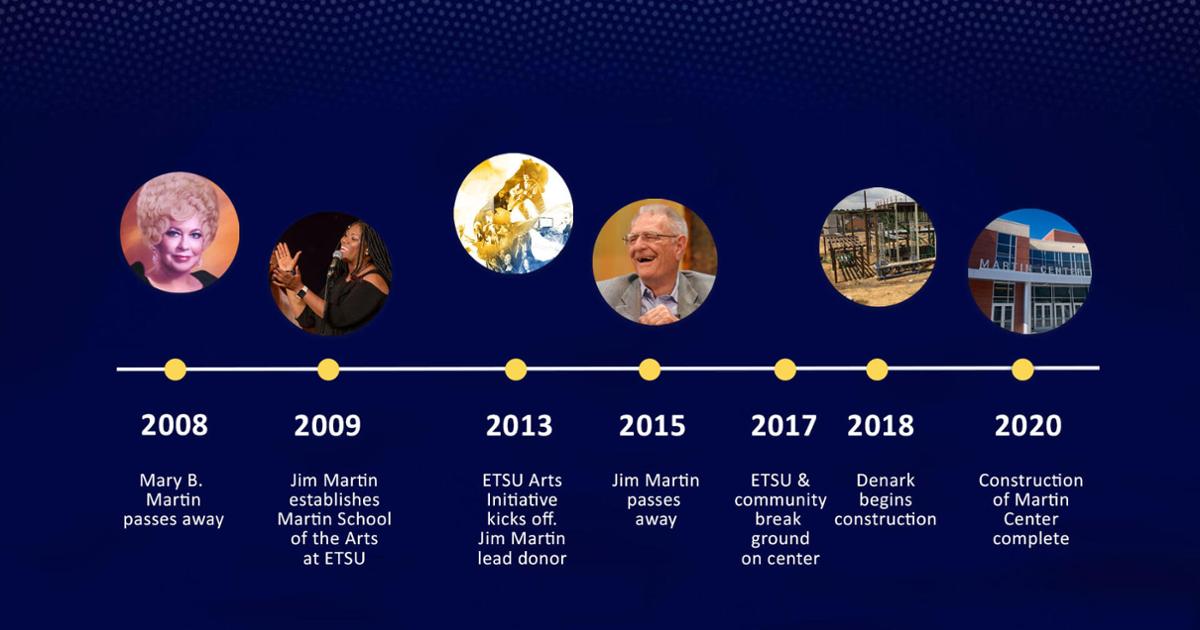