Taylor Dennis, a senior double-majoring in physics and mathematics from Jackson, Tennessee, says she developed her independent spirit through the freedom her parents gave to her and her younger sister to explore and learn about themselves on their own, and she always wanted to do her best in school not because she had to, but because she knew she needed to do so for herself.  Dennis recently spent the summer at Oak Ridge National Laboratory (ORNL), where she took part in the Scientific Undergraduate Laboratory Internships (SULI) Program of the U.S. Department of Energy’s Office of Science.  While there, she worked with renowned physicist Dr. Leah Broussard, who is conducting experiments dealing with mirror neutrons.  Dennis is also a former member of ETSU’s Speech and Debate Team, which brought home first place in the Four-Year College Team Sweepstakes in a parliamentary debate tournament held at Bryan College, among other honors.

How did you choose to major in both physics and mathematics? 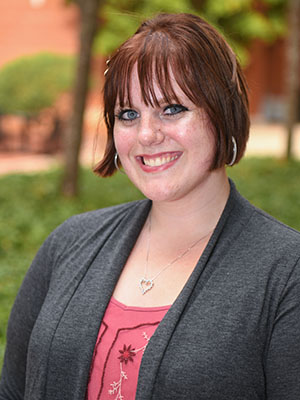 I originally came here as a chemistry major, because I really liked my high school chemistry teacher and it was fun.  And mathematics is something that I’ve always been interested in, so that was a “no-brainer” for me.  But once I started taking chemistry classes here, I realized the parts of chemistry I really connected with were those that crossed over into physics.  Since I like math so much, and physics is so closely tied with math – math is tied with all the sciences, but most specifically with physics – I decided to try physics, and I’m so glad I did.  The faculty are absolutely amazing.  There were a few times my classes got a little rough and it seemed stressful and hard, but the faculty were willing to help, and they just helped me stay with it.  I’m really happy with it.

Tell us about your summer at ORNL and what you gained through your experience.

My professor Dr. Robert Pattie knew Dr. Leah Broussard at Oak Ridge National Laboratory and asked me if I would like to work with her if I were to get into this program.  I said yes, and I applied and got in!  I ended up working with Dr. Broussard on a really amazing project in the nuclear physics department dealing with dark matter.  Dark matter is a really big thing now in physics.  Everybody wants to figure out what dark matter is.  It’s almost kind of a race to figure it out.  “Can I see what it is?”  “Can I think of what it is?”  We have no idea what it is, and that’s why it’s called dark matter.  So, there’s this idea that there are mirror particles – mirror neutrons, mirror protons – that exist, and so what we wanted to do was create an experiment to test if they actually do exist.  We used the Spallation Neutron Source, which produces beams of neutrons.  We did a lot of background analysis, and I got to help with that and look at the data as it was coming in.

It was such a great experience to meet actual scientists and watch them – how they work, how they interact with each other – and see what it really means to be a scientist, especially at a national lab level.  It’s just so inspiring that I could possibly one day be one of these scientists.  It really opened my eyes to how awesome being in this field can be.

You’ve had some other opportunities as an undergraduate researcher, such as attending the 2018 Undergraduate Women in Physics Conference at the University of Virginia.  What was that like?

I’m sure it’s no surprise that in the physics field there aren’t that many females, so being able to actually attend a conference where I see other people – specifically women – who are just as interested in physics as me was an exciting experience.  It was really fun to be able to connect and be like, “Yes, we love physics!”  There were a lot of high-level doctors who came to talk to us about their research, and I had an opportunity to present the research I did with my professor, Dr. Beverly Smith, the summer before.  Also, this month, I’m going to talk at the American Physical Society Division of Nuclear Physics fall meeting about the work I did this summer. 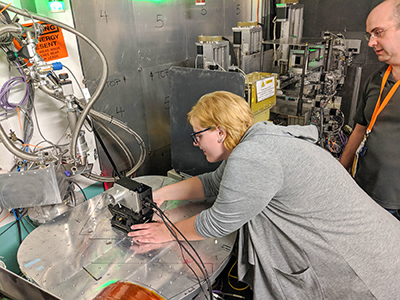 Tell us what it was like to be part of ETSU’s award-winning Speech and Debate Team and how that has helped you in your major.

I’ve always liked speaking.  In high school, I did forensics – the speaking type of forensics – and so when I heard there was a speech and debate team here, I thought that was amazing.  It was very nice to be part of that team.  We were always supportive of each other in learning to be better speakers and debaters in general.  Debate was always my favorite.  There’s just something about the thrill of not knowing exactly what you want to say next but still having to think of something.  You never know what the opponent is going to come at you with.  It definitely helped me learn to think on my feet a little more and practice that skill, which will be very useful in the future.

What are your educational and career goals after you graduate in May 2020?

I’m torn right now between two separate paths.  I love physics, but I also really love math.  So I’m torn between trying to pursue a doctoral program in nuclear physics, but I’m also thinking about pursuing statistics.  It’s funny – I’m more into computational and applied mathematics, so I never really thought much of statistics or that I would like it.  But a requirement of one of the programs I’m in, S-STEM, is to take a lot of statistics classes, and it was there that I learned how much I love statistics in general.  Some people think it’s horrible, but it’s great being able to analyze data and know what’s going on.  So I’m thinking of applying to two types of programs and seeing how that works.  From there, I don’t know.  But I would totally be up for eventually working at Oak Ridge, because it was very nice there.

What do you do in your spare time?

I love the mountains, I love the water everywhere, and I love to kayak.  There are so many opportunities for that here that we don’t have in West Tennessee.  I also really enjoy walking and looking at nature and being part of it.  There are many trails here, and especially after a stressful day, it’s nice to just go for a walk – kind of forget everything and just enjoy nature.  As a college student, I often get caught up in “Oh, my goodness, I have homework due and a project due next week,” but it’s always really nice to just step back and think, “It’s fine.  That’s life.  You’re going to get it done, and it’s going to be fine.”  I also really enjoy hanging out with my friends on campus, and I have to talk about how awesome the Sherrod Library is.  I love working there and find the study rooms to be a very comfortable place to study.  I’ve spent many a long night there working on things, and have never felt out of place.

What advice would you give to new students at ETSU?

As a freshman, I was all kinds of stressed out trying to figure out what I wanted to do, and I didn’t know a whole lot of people.  It was a whole new time of learning to live by myself without my parents, without my sister, and trying to make new friends in a whole new part of the state.  If I have any advice, it is don’t be afraid to talk to people.  I was very shy coming in, but I’ve very much grown out of that.  Talk to people, because they want to talk to you.  They don’t think you’re weird if you want to start up a conversation and just talk about small things like the weather.  Also, if you’re ever struggling with classes and just think you can’t do it, calm down and just work through it.  Trust me, everything is going to be A-OK because you put in your best effort. 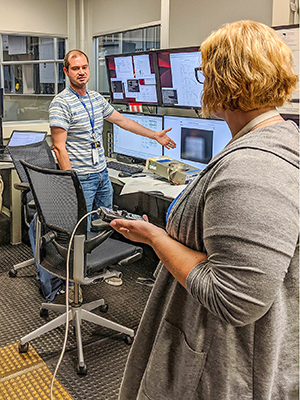 Above: Graduate student Matthew Frost from University of Tennessee-Knoxville and Summer Undergraduate Laboratory Intern Taylor Dennis from East Tennessee State University optimize images from a neutron camera at the Magnetism Reflectometer at the Spallation Neutron Source. These neutron beam characterizations were used to determine the sensitivity of the instrument for a neutron oscillations search. (Photo courtesy of Taylor Dennis and Oak Ridge National Laboratory)