An exchange agreement between his high school in Guayaquil, Ecuador, and University School provided a pathway for Cristopher Santana to learn more about ETSU.

“From the moment I stepped foot on campus, they had me,” recalls Santana of his first tour of ETSU. He arrived as a freshman in fall 2014 and from there the journey commenced, a journey that led him to earn two degrees, hold various leadership roles, earn the honor of “SGA Senator of the Year,” and, earlier this year, be appointed to the ETSU Board of Trustees. 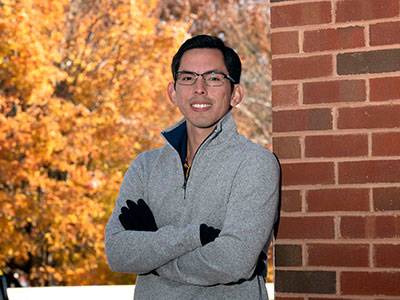 All that and much more in just five years, though Santana says none of this would have happened had he not been willing to step outside his comfort zone.

“When you get outside your comfort zone, you get used to change, and that is important because we live in an ever-changing world,” said Santana, who is now a graduate student at ETSU. “It was difficult for me at first because I consider myself an introvert, but I started socializing and talking to people more and it became easier. I have met some amazing people.”

Santana began his first year as an economics major, and with the encouragement of his advisor he added finance as a second major during his sophomore year. He graduated from ETSU in May 2018 with two B.B.A. degrees.

“The faculty are really invested in their students,” he said. “They have a lot of time in class to answer questions and they are great about meeting with you during their office hours. I really appreciate how involved they were in helping us be successful.”

While an undergraduate, he was active with the Economics Club, the Hispanic American Student Community Alliance, and the Student Finance Association and held leadership roles with all three. He also joined the Student Government Association as an associate justice during his junior year and the following year became a senator for the College of Business and Technology.

He wrote seven items of SGA legislation that year and was named “Senator of the Year,” which Santana says was very humbling and came as a surprise.

Earlier this year, Santana submitted his name as a candidate to be part of the ETSU Board of Trustees as the Student Trustee for the 2019-20 year. He underwent a series of interviews before his name was recommended to President Noland as the finalist. His first meeting as a member of the Board of Trustees was in September 2019.

“I reflect on something my parents told me over and over since I was a kid. ‘Leave the place better than how you found it,’” he said. “That is the least I can do when I think about all the opportunities that ETSU has given to me. I could never repay this university for all they have done for me.

“It has been a wonderful journey.”

Future plans for Santana include earning a Ph.D. degree and working in the financial sector in the United States or back home in Ecuador. 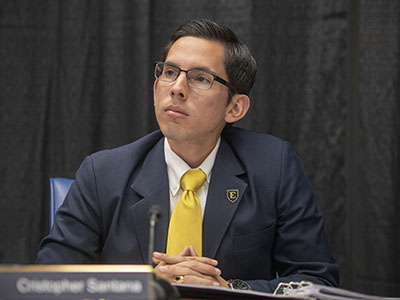