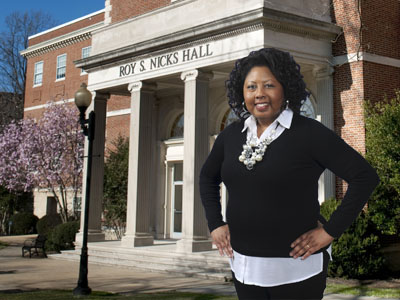 Born in Columbus, Ga., she attended school in the small rural town of Smiths Station, Ala. After graduating from high school, she enlisted in the United States Army and served on active duty at Fort Bragg, N.C. Next, she entered the Army Reserves and was assigned to Wright Patterson Air Force Base near Dayton, Ohio.

When her husband began working in Kingsport, Altheria and their two sons found themselves in new territory.

Since Davis had always aspired to higher education, she enrolled in Northeast State Community College. She did very well so well, in fact, that she earned a Midway Honors Scholarship through ETSU's Honors College.

At first, Davis was uncertain about school. But, she says, "Being received by fellow students, as well as faculty and staff, has been the most pleasantly surprising experience. Considering my age, I did not expect to meet and converse with a diverse group of students or the awesome assistance that I've received from instructors and the rapport that I've built with many professors."

After completing her bachelor's degree, Davis plans to go on for a Master of Science in Nursing degree, specializing in midwifery, and to become a Family Nurse Practitioner.

While she was in the Army, Davis was trained as a medic. "I worked in labor and delivery," she says, "and I really enjoyed the work. That is the happiest branch of medicine."

When she completes her education, Davis says, "My goal is to work with rural and underprivileged women."

With any spare time, Davis volunteers at Second Harvest Food Bank, packing bag lunches for school children. "That is a very rewarding experience," she notes. "Every time I pack a lunch, I know that a child will not go hungry because of the efforts of volunteers."