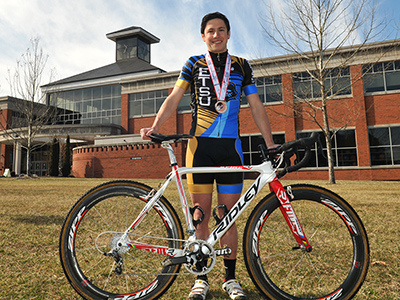 Joseph Welsh is a student in the East Tennessee State University's accelerated Bachelor of Nursing as a second degree program. The Memphis native was also the bronze medal winner at the recent USA Cycling Collegiate Cyclo-Cross Nationals in Boulder, Colo.

Welsh completed a bachelor's degree in biology at Lees-McRae College in Banner Elk, N.C. "The school has a terrific cycling team," he says, "and they recruited me."

Since he loves the mountains, Welsh decided to come to ETSU as his next academic step and see how the mountains look on the Tennessee side. "A friend was in the nursing program here. He loved it, and I decided that would be a good choice for me."

Now cycling for ETSU, he enjoys training rides to Limestone and Erwin over Buffalo Mountain or to Hampton and back over Iron Mountain. That type of ride can burn 4,000 calories a day, and they give Welsh time to think. "I don't listen to music," he explains, "because I need to be alert to traffic, but I can plan as I rideanything from what to write in an assigned essay to what I will do the rest of the day."

Between attending Lees-McRae and ETSU, Welsh took off a year to work and cycle. He rode along the East Coast and at Northern events. "I even entered an event in Madison, Wisconsin, in January," he says. "That was extremely cold!"

Since Welsh's father is a pilot who works for FedEx, he often flies the family to wherever Welsh has entered an event. "My family is incredibly supportive," Welsh says. "They made sure I was able to practice and go wherever I needed to go when I was a child, and now they attend races everywhere." A favorite was the Junior World Championships in Australia that included a family vacation. "We saw kangaroos as we traveled," he notes. "They are sort of like deer are here, but there are more of them."

Welsh began competitive cycling at age 9. "I was on the swim team at school and a friend suggested I enter an IronKids triathlon with him." The contest, which involves swimming, cycling and running, became Welsh's passion. Eventually, he had to choose one area of focus, and he opted for cycling.

Although he loves the mountains, Welsh says that when he graduates, he would like to join a former roommate in Florida and work as a nurse, perhaps in emergency medicine. "And," he says, "I'd like to ride my bicycle on flat terrain for a while."