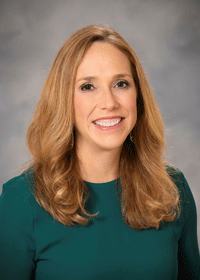 In 2007, Brooks Pond became one of the inaugural faculty at the Gatton College of Pharmacy. Brooks received her Ph.D. in Pharmacology from Duke University, where she worked closely with Rochelle Schwartz-Bloom and George Augustine. After graduation, Brooks completed a 2 year postdoctoral fellowship in Developmental Neurobiology at St. Jude Children's Research Hospital under the mentorship of Richard Smeyne. Although her expertise is in the field of neuropharmacology, she enjoys teaching in many areas of physiology and pharmacology. Brooks also loves working with both graduate students and pharmacy students in the laboratory, where she seeks to better understand the consequences of psychostimulant use on the brain.

Our laboratory is interested in long-term effects of psychostimulants. Current projects include an investigation of long-term effects of methylphenidate on neurogenesis within the hippocampus and an analysis of the neurochemical effects of the synthetic cathinones previously legally marketed as "bath salts". In addition, the laboratory is currently utilizing high pressure liquid chromatography-mass spectrometry (LC-MS) to characterize the pharmacokinetic profile of some of these compounds.