The 1911 Society, established in 2020, honors East Tennessee State University’s most distinguished graduates from undergraduate, graduate, and professional programs. Situated “in the shadow of the mountains,” ETSU has been educating, serving, and supporting the region since its founding in 1911. Students inducted into The 1911 Society have distinguished themselves among all graduates for academic excellence, service, and leadership. 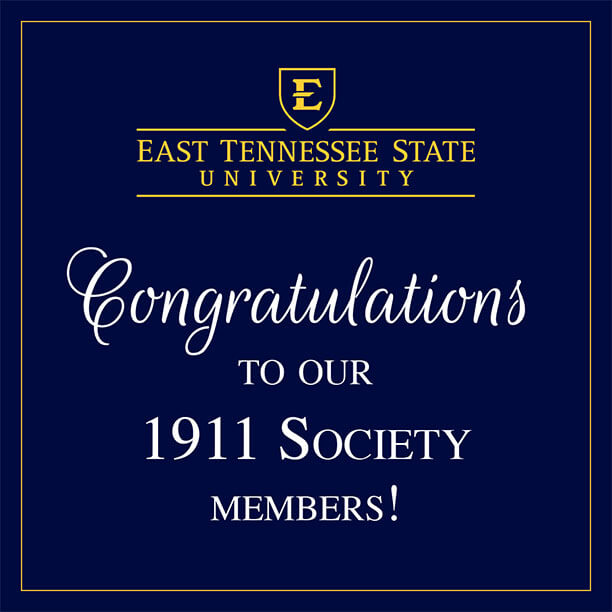 JOHNSON CITY – (May 4, 2020) Ten members of the Class of 2020 at East Tennessee State University have been inducted into the newly formed 1911 Society. Named in commemoration of the year when ETSU was founded, the organization honors the university’s most notable graduates from undergraduate, graduate and professional programs. The 1911 Society recognizes students who have distinguished themselves among all graduates for academic excellence, service, and leadership.

ETSU President Dr. Brian Noland said, “For more than a century, ETSU has carried forth a mission to improve the quality of life for the people of this region. That initiative began in 1911 when the doors of this institution opened, and this new organization recognizes an elite group of graduates who have embodied that very mission. We are honored to recognize these members of the Class of 2020 and look forward to seeing the new ways they advance this mission as alumni during their future journeys.”

“The 10 students being inducted into The 1911 Society have achieved great accolades in the classroom, in research laboratories and in service to this campus and our communities,” said Dr. Wilsie Bishop, Senior Vice Provost for Academics and Interim Provost.  “Each has transformed ETSU in some way during their years as a student, and selecting them as inaugural members is our way of recognizing and celebrating the legacies they have established.”

Students selected for induction into The 1911 Society will receive a tartan stole to wear with their regalia. Names of new inductees will be identified in the Commencement program. Inductees, and members of their immediate families, will be invited to a lunch on the day of Commencement to celebrate and recognize this achievement.

Sarah Hamilton of Johnson City has been a member of the Preview and Orientation Leadership Organization, serving as Vice President and as one of the student leaders. In addition, she is the service-learning coordinator for the Language and Culture Resource Center. Hamilton is earning a B.S. degree in biology and a second B.A. in foreign languages with a concentration in Spanish.  Other campus-involvement initiatives include International Buccaneer Buddies, Volunteer ETSU, Admission Ambassadors, the ETSU Homecoming Committee and SGA Major Events.  Hamilton also served as a Spanish tutor at Science Hill High School and helped plan the Corazón Latino Festival.

Alexis Harvey from Dunlap was active with Volunteer ETSU throughout her four years and served on the executive council for the organization during her junior and senior years. A University Honors Scholar and a Ronald McNair Scholar, she was a member of the ETSU Honors College Student Council and also served as a site leader with Alternative Breaks for three years. Harvey is receiving a bachelor’s degree in chemistry. She helped as a chemistry supplemental instructor for three years and as a chemistry TRIO tutor for two years. This spring she received an award from the Northeast Tennessee Section of the American Chemical Society that is given to an outstanding senior.  She also was the Department of Chemistry’s “Faculty Outstanding Student Award” recipient.

Shannon Ketchem of Alexandria, Virginia is graduating from Bill Gatton College of Pharmacy.  While a student, she served as a student ambassador for the admissions committee and was class president during the 2017-18 year.  In addition, she was chapter president of the Phi Lambda Sigma Pharmacy Leadership Society and a committee chair for the American Pharmacists Association – Academy of Student Pharmacists.

Brianna McCoy of Ashe County, North Carolina was selected for the highly prestigious Roan Scholars Leadership Program.  She is receiving her bachelor’s degree in health sciences and is minoring in public health.  McCoy has held several leadership positions, including president of the National Society of Collegiate Scholars and Admissions Ambassadors, secretary of the Presidential Ambassadors and fundraising chair of Timmy Global Health. McCoy also completed a number of volunteer internships at health care facilities in the region.

Margaret Jean Miller of Knoxville is earning her M.D. degree from the Quillen College of Medicine and also a Master of Public Health degree from the College of Public Health.  While a student, she was active with the American Academy of Family Physicians, serving as a student member of the Board of Directors and student chair for the national conference.  She was recently inducted into the Gold Humanism Honor Society and she is a former president of the Family Medicine Interest Group.  Miller trained in Quillen’s Rural Primary Care Track and worked closely with the Interprofessional Education Program.

Taylor Osborne came to ETSU from Clyde, North Carolina. While a student, she served as President of Alpha Delta Pi sorority and also held the roles of Vice President of Panhellenic Relations and Assistant New Member Coordinator.  She was selected for the highly prestigious Roan Scholars Leadership Program and spent a summer studying abroad in Spain. A member of the Pre-Law Society and the International Buccaneer Buddy Program, Osborne worked in the Crime Addiction Re-Entry Lab and was a Presidential Ambassador. She is graduating with a B.S. degree in psychology.

Aamir Shaikh of Knoxville served as President of the ETSU Student Government Association for the 2019-20 year and is graduating with a B.S. degree in microbiology.  While at ETSU, he completed an honors thesis exploring the role of a novel antidepressant in the treatment of depression, amongst other research projects at the Quillen College of Medicine. Shaikh’s volunteer work focuses on the provision of medical care to the isolated and underserved. His other leadership positions held on campus include President of the Multicultural Association of Pre-Health Students, Secretary of State for the SGA, Vice President of the Honors College Student Council and working as a campus Diversity Educator.

John Sterrett of Martin was a University Honors Scholar and served as a member of the ETSU Jazz, Trombone and Wind ensembles. Sterrett, who held executive leadership roles with the Student Dietetic Association and the Allied Health Student Association, was involved in research activities in ETSU’s Nutritional Biochemistry Lab and spent time as a tutor and a supplemental instructor on campus.  He was also active with the National Residence Hall Honorary.

Raina Wiseman of Crossnore, North Carolina is graduating with an M.A. in Brand and Media Strategy.  She worked for the East Tennessean student newspaper as a reporter and, for the past two years, executive editor. In addition to serving as a member of the Strategic Media Club, she was a co-creator of The ET Echo, a news show that aired on the campus radio station. Wiseman assisted in communication efforts and marketing for the Niswonger Foundation, Roan Scholars Leadership Program, ETSU University Relations and BucDigital.

Any East Tennessee State University student, domestic or international, who meets the eligibility requirements for their category are eligible to apply:

To apply, students must submit responses to the application questions as well as the required two letters of references. Incomplete applications will not be reviewed.

Selections will not be based on GPA exclusively. The committee will base its decision on all of the following:

The Selection Committee will be composed of the following representatives:

Students should complete the responses to items 2-8 either as a MS Word document or a PDF file to be uploaded to the online submission. All documents should be submitted to the Office of the Provost at provost@etsu.edu.

Respond to the following questions:

Students selected for induction into The 1911 Society will receive a tartan stole to wear with their regalia. Names of new inductees will be identified in the Commencement program. Inductees, and members of their immediate families, will be invited to a lunch on the day of Commencement to celebrate and recognize this achievement.