Topographic Features - The topography of Tennessee is quite varied, stretching from the lowlands of the Mississippi Valley to the mountain peaks in the east. The westernmost part of the state, between the bluffs overlooking the Mississippi River and western valley of the Tennessee River, is a region of gently rolling plains sloping gradually from 200 to 250 feet in the west to about 600 feet above sea level in the hills overlooking the Tennessee River. This region is defined as Division 4 (West Tennessee). The hilly Highland Rim, in a wide circle touching the Tennessee River Valley in the west and the Cumberland Plateau in the east, together with the enclosed Central Basin make up the whole of Middle Tennessee. The Highland Rim ranges from about 600 feet in elevation along the Tennessee River to 1,000 feet in the east and rises 300 to 400 feet above the Central Basin which is a rolling plain of about 600 feet average elevation, but with a crescent of hills reaching to over 1,000 feet south of Nashville. This region is defined as Division 3 (Middle Tennessee). The Cumberland Plateau, with an average elevation of 2,000 feet extends roughly northeast-southwest across the state in a belt 30 to 50 miles wide, being bounded on the west by the Highland Rim and overlooking the Great Valley of East Tennessee on the east. This region is defined as Division 2 (Cumberland Plateau). The Great Valley, paralleling the Plateau to the west and the Great Smoky Mountains to the east, is a funnel-shaped valley varying in width from about 30 miles in the south to about 90 miles in the north. Within the valley, which slopes from 1,500 feet in the north to 700 feet in the south, is a series of northeast-southwest ridges. Along the Tennessee-North Carolina border lie the Great Smoky Mountains, the most rugged and elevated portion of Tennessee, with numerous peaks from 4,000 to 6,000 feet. This region is defined as Division 1 (East Tennessee).

Tennessee, except for a small area east of Chattanooga, lies entirely within the drainage of the Mississippi River system. The extreme western section of the state is drained through several relatively small rivers directly into the Mississippi River. Otherwise, drainage is into either the Cumberland or Tennessee Rivers, both of which flow northward near the end of their courses to join the Ohio River along the Kentucky-Illinois border. The Cumberland River, which drains north-central portions of Tennessee, rises in the Cumberland Mountains in Kentucky, flows southwestward, then south into Tennessee reaching the Nashville area before tuning northward to re-enter Kentucky. The Tennessee River is formed by the juncture of the Holston and French Broad rivers at Knoxville. It flows southwesterly along the Alabama-Mississippi line, and then flows northward across the state into Kentucky. Besides the headwater streams, other important tributaries include the Clinch, Nolichucky, Watauga, Little Tennessee, Hiawassee, Elk, Duck, Obion, and Hatchie Rivers.

Temperature - Most aspects of the state’s climate are related to the widely varying topography within its borders. The decrease of temperature with elevation is quite apparent, amounting to, on average, three degrees Fahrenheit (°F) per 1,000 feet increase in elevation. Thus, higher portions of the state, such as the Cumberland Plateau and the mountains of the east, have lower average temperature than the Great Valley of East Tennessee, which they flank, and other lower parts of the state. In the Great Valley temperature increases from north to south, reaching a value at the south end comparable to that of Middle and West Tennessee where elevation variations are a generally minor consideration. Across the state, the average annual temperature varies from over 62° F in the extreme southwest to near 46° F atop the highest peaks of the east. It is of interest to note that average January temperature atop a 6,000-foot peak in the Great Smoky Mountains (e.g., Mt. LeConte) is equivalent to that in Central Ohio, while average July temperature is comparable to the southern edge of the Hudson Bay in Canada. While most of the state has warm, humid summers and mild winters, this must be qualified to include variations with elevation. Thus, with increasing elevation, summers become cooler and more pleasant while winters become colder with increasing winds and dangerous snowfall events. Most of Tennessee is in the Humid Subtropical climate type, while higher elevations are in the Oceanic/Highland climate type. Extremely small areas over 6,000’ in elevation may be considered part of the Humid Continental (Dfb) climate type. 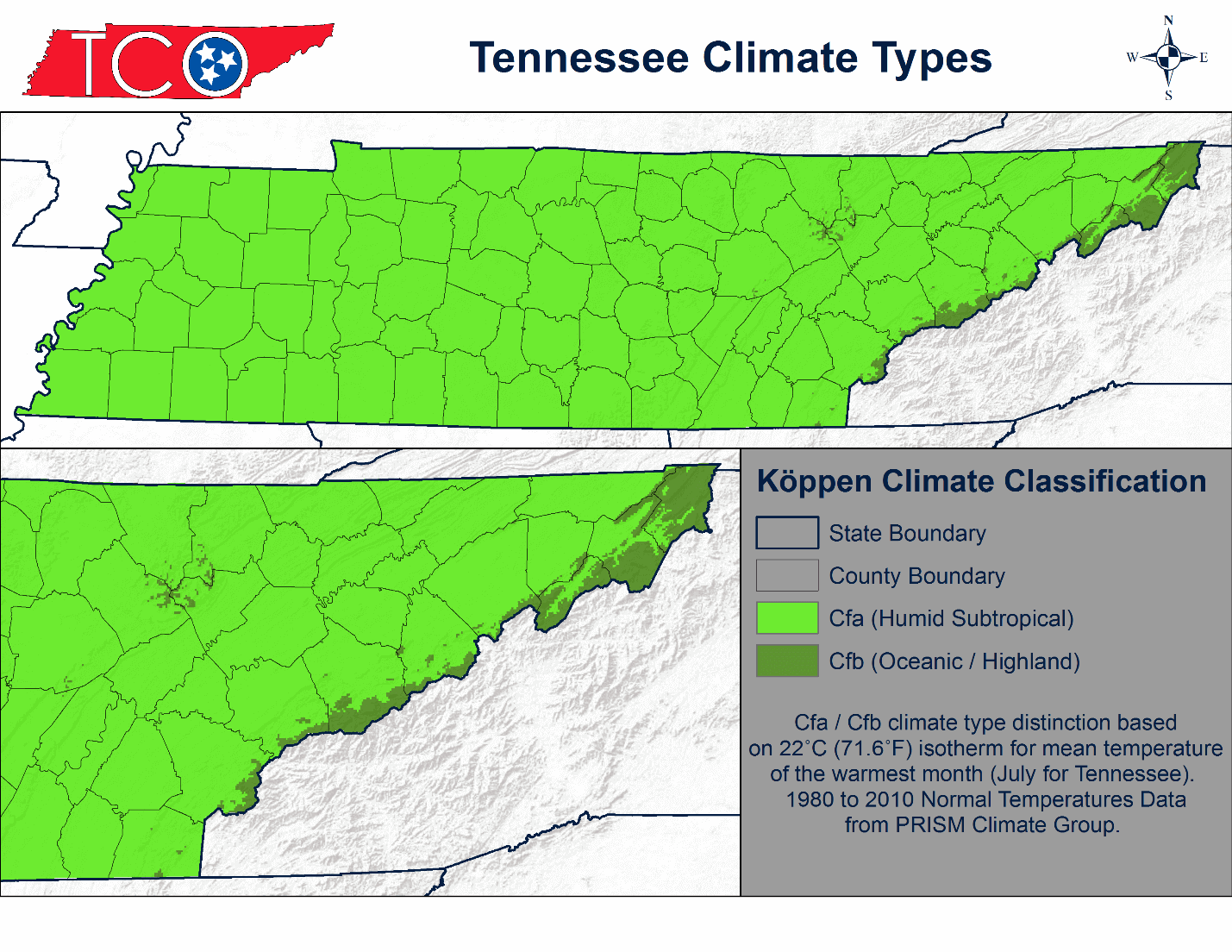 This dependence of temperature on elevation is of considerable importance to a variety of interests. Temperature, together with precipitation, plays an important role in determining what plant and animal life are adaptable to the area. In the Great Smoky Mountains, for example, the variations in elevation from 1,000 to 6,000 feet with attendant variations in temperature contribute to a remarkable variety of plant life. You can explore plant hardiness zones in Tennessee using the USDA Interactive Map. There are currently six zones in Tennessee (5b, 6a, 6b, 7a, 7b, and 8a). The relative coolness of the mountains also contributes to the popularity of that area during the warmer part of the year. 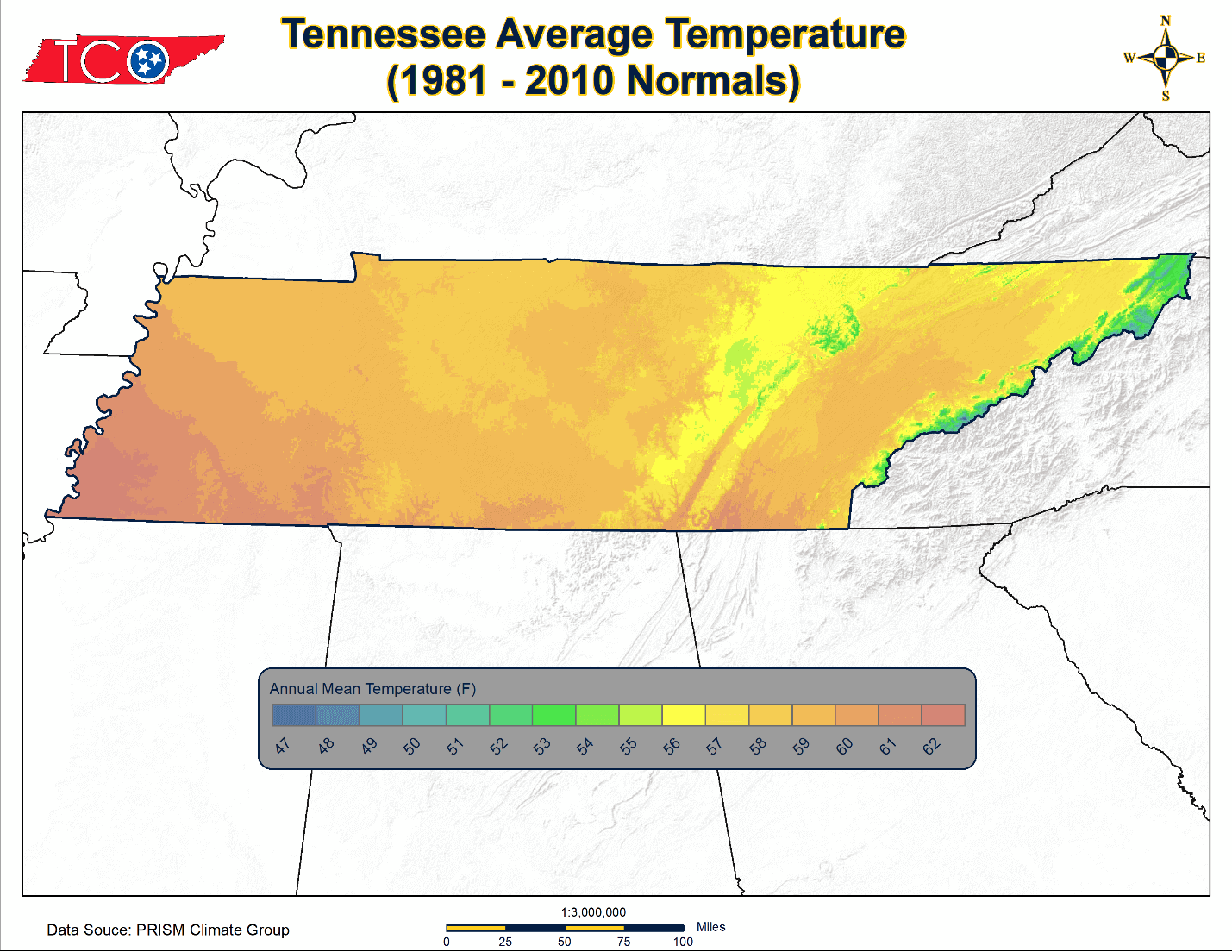 Length of growing season is linked to topography in a way like temperature, varying from an average of 237 days at low-lying Memphis to a near 130 days on the highest mountains in the east. Most of the state is included in the range of 180 to 220 days. Shorter growing seasons than this are confined to the mountains forming the state’s eastern border and to the northern part of the Cumberland Plateau. Longer growing seasons are found in counties bordering the Mississippi River, parts of the Central Basin of the Middle Tennessee, and the southern end of the Great Valley of East Tennessee (around Chattanooga).

Precipitation - Since the principal source of moist air for this area is the Gulf of Mexico, there exists a gradual decrease of average precipitation from south to north. This effect is largely obscured, however, by the overruling influence of topography. Air forced to ascend, cools and condenses out a portion of its moisture. Thus, average precipitation in West Tennessee ranges from 46 to 54 inches, increasing from Mississippi bottomlands to the slight hills farther east. In Middle Tennessee, the variation is from a minimum of 45 inches in the Central Basin to 50 to 55 inches in the surrounding hilly Highland Rim. Over the elevated Cumberland Plateau, average annual precipitation is generally from 50 to 55 inches. In contrast, average annual precipitation in the Great Valley of East Tennessee increases from near 40 inches in northern portions to over 50 inches in the south. The northern minimum, lowest for the entire state, results from the shielding influence of the Great Smoky Mountains to the southeast and the Cumberland Plateau to the northwest. The mountainous eastern border of the state is the wettest, having average annual precipitation ranging up to 80+ inches on the higher, and well-exposed peaks of the Great Smoky Mountains. 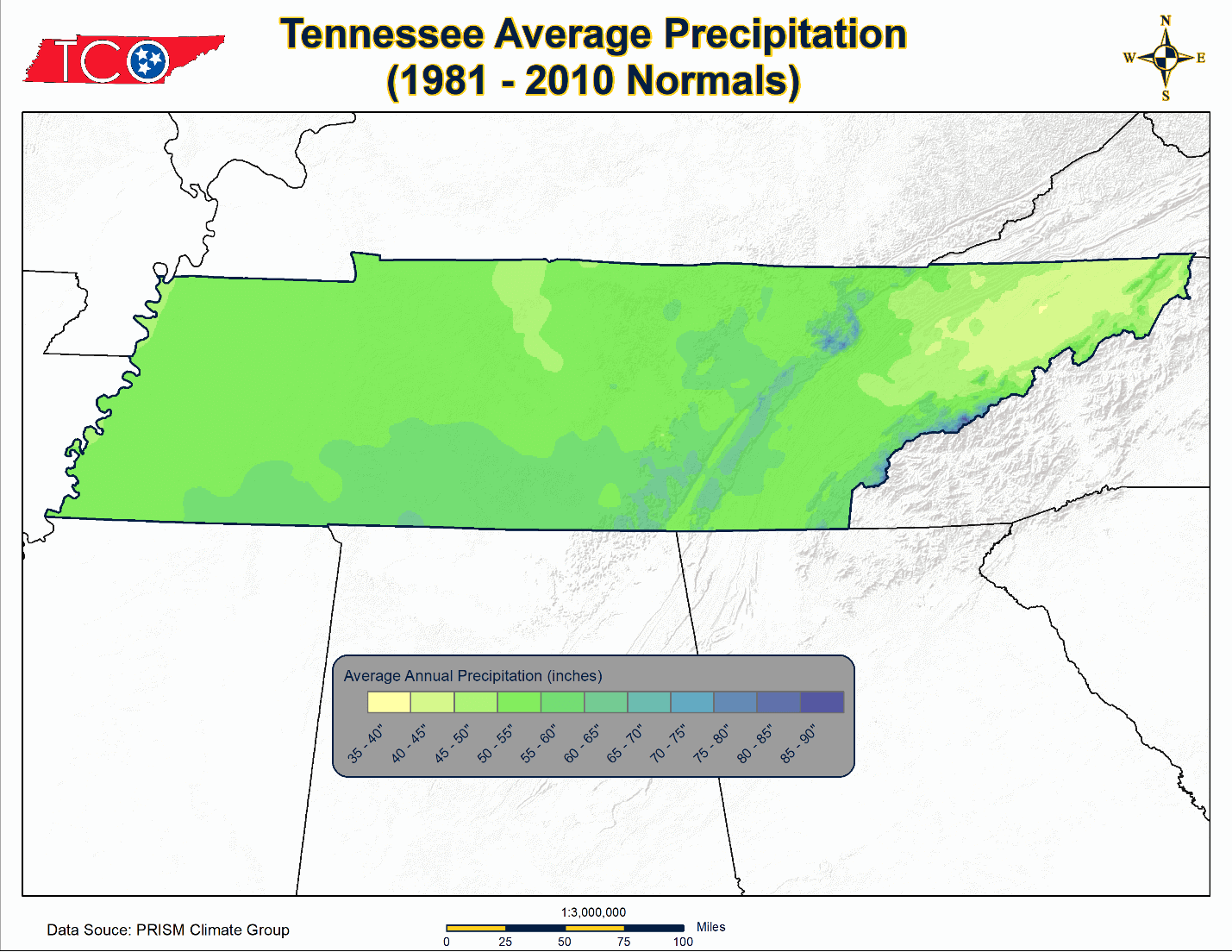 Over most of the state, the greatest precipitation occurs during the winter and early spring due to the more frequent passage of large-scale storms over and near the state during those months. A secondary maximum of precipitation occurs in midsummer in response to thunderstorm activity. This is especially pronounced in the mountains of the east where July rainfall exceeds the precipitation of any other month. Lightest precipitation, observed in the fall, is brought about by the prevalence of slow moving, rain suppressing high pressure areas. Although all parts of Tennessee are generally well supplied with precipitation, there occurs on the average one or more prolonged dry spells each year during summer and fall. Studies illustrate the beneficial effects of supplemental irrigation of crops, despite usually bountiful annual precipitation. Irrigation can be especially important during ‘flash drought’ events, which occur from time to time and can have major agricultural and economic impacts.

Average annual snowfall varies from four to six inches in the southern and western parts of the state and in most of the Great Valley of East Tennessee to more than 10 inches over the northern Cumberland Plateau and the mountains of the east. Mt. LeConte (6,594’), on average, receives ~75 inches of snowfall each year, although some years receive over 100 inches of snowfall. Over most of the state, due to relatively mild winter temperatures, snow cover rarely persists for more than a few days.

The most important flood season is during the winter and early spring when frequent low pressure systems bring general rains of high intensity. During this period both widespread flooding and local flash floods can occur. During the summer, heavy thunderstorm rainfalls frequently result in local flash flooding. In the fall, while flood-producing rains are rare, a substantial tropical system on occasion causes serious floods. The numerous dams constructed along the Tennessee and Cumberland rivers are major features in the control of floodwaters in the state.

The dams of the Tennessee and Cumberland River systems and associated lakes, in addition to vastly reducing flood damage have facilitated water transportation, provide abundant low-cost hydroelectric power, and create extensive recreation areas. Fishing, boating, swimming, and camping along the many lakes, together with the several state and national parks/forests/wildlife management areas, make tourism one of the major industries in the state.

Climate and the Economy - Water resources of Tennessee have been a major factor in the state’s industrial growth. The bountiful and good quality water supply influenced the location of industry, especially chemical processing plants. Three major waterways, the Mississippi, Cumberland, and Tennessee Rivers, are suitable for commercial traffic. Finally, the availability of low-cost hydroelectric power from the multipurpose dams of the Cumberland and Tennessee rivers and tributaries spurs industry of all types. The principal types of manufacturing products are textile mill products, primary metals, fabricated metals, and lumber products.

Although surpassed in monetary value by industrial activity, agriculture remains a vital feature of Tennessee’s economic life. The wide range of climates and environments in Tennessee, from river bottom to mountaintop, coupled with a wide range of soils, has resulted in many crops that thrive in the state.

Forests represent an additional important segment of Tennessee’s natural resources related to the climate of the state. Timberland, containing principally hardwood types, covers approximately one-half of the total area of Tennessee. This has led to a highly diversified woodworking industry and made the area around Memphis the center of production for wood flooring. The temperate climate of the state is very favorable for logging operations, allowing full-scale activity during nine months of the year and to a lesser extent during the winter months.

Climate descriptions of Tennessee - Generally, Tennessee has a temperate climate, with warm summers and mild winters. However, the state's varied topography leads to a wide range of climatic conditions.