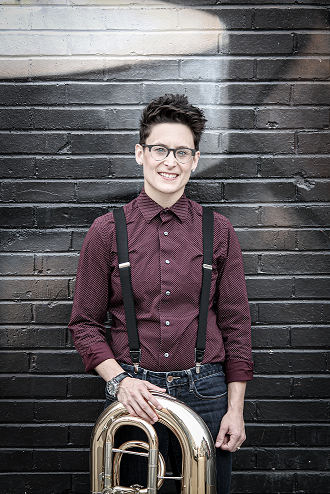 Steph Frye is an active soloist, chamber musician, orchestral performer and educator across the country. They are currently on the faculty of East Tennessee State University (ETSU), and previously held positions at University of Wisconsin-Platteville and Concordia University Wisconsin.

Steph is a member of the Mirari Brass Quintet, the trombone-tuba duo Bell(e) Collective, the Brass Band of Appalachia and has performed with the Milwaukee, Green Bay, La Crosse, Manitowoc and Fox Valley Symphony Orchestras. They have twice placed in the top three at major solo competitions. As a former member of the MadTown LowDown Tuba-Euphonium Quartet, Steph was a finalist at the 2010 Fischoff National Chamber Music Competition, the 2010 and 2011 Wisconsin Public Radio Neale Silva Competition, and the 2010 and 2011 Plowman Chamber Music Competition in Missouri, where the group was awarded the 2010 Judges Special Recognition Award.

Steph has considerable experience teaching students of all ages. In addition to their work at ETSU they maintain a private low brass studio, have worked with the brass sections of multiple youth orchestras, are the tuba and euphonium instructor at Lutheran Summer Music in Decorah, Iowa, and have been the tuba instructor at the University of Wisconsin-Madison Summer Music Clinic for both middle and high school students.