We’re proud of all our graduates, and their many varied accomplishments, but please allow us to introduce just one (for now).  Meet Kevin Carlson … 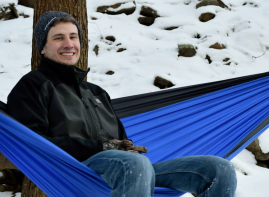 Kevin is graduate of Greeneville High School. At      ETSU he was a double major in philosophy and    economics, a University Honors Scholar and    served for several years on SGA. He graduated in  Spring 2016 from ETSU and from The University of  Chicago Law School in 2019. He currently serves as a law clerk to a federal district judge in Chattanooga.

Kevin, would you say that you’re glad you majored in philosophy?

How do you think the skills you developed through philosophy are relevant to your current job?

Critical thinking is critical to my job as an attorney. So too writing forceful and correct arguments. Many people seem to believe that lawyers simply bloviate to obscure weak substance with confident form. (Some surely do--but please try not to hold them against the rest of us.) In fact, law requires a deep commitment to sound reasoning, uncovering the truth, and instantiating justice. These commitments sound philosophical because they are, and a philosopher's toolkit will serve any attorney well.

Finally, in what ways do you think philosophy has enhanced your life outside work?

Interesting question, and one that prospective philosophy majors probably don't think to ask. I entered college with a clear set of beliefs and ideas about how the world is. Four years of philosophy later, I realized that many of my core beliefs were misguided. This stems from many factors, but probably could have been avoided to some extent were I a stronger critical thinker at a younger age. As a result of my education, I think that I now have a more robust and reasonable belief system. Am I living the "good life"? No. Am I a better person? I hope and believe so. Am I better-off? Without a doubt. It is hard to pin down the exact value of having more reasonable beliefs, but they are worth pursuing sooner rather than later.

Thanks for your time Kevin!