Philosophy is quite unlike any other field.  It is unique both in its methods and in the nature and breadth of its subject matter.
Philosophy pursues questions in every dimension of human life, and its techniques apply to problems in any field of study or endeavor. 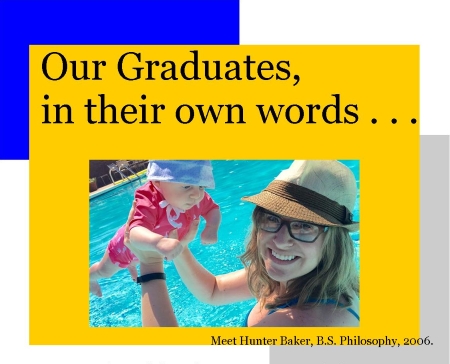 Many of our Philosophy majors go on to find success in a variety of careers, including law, medicine, and business, to name but a few. Read what our graduates have to say about how a philosophy major prepared them for life after college.

Read more about the benefits of studying philosophy ...

A new essay by Jill Drouillard, Visiting Assistant Professor in Philosophy, has been published by the American Philosophical Association.  “How to Philosophize with an Affinity of Hammers: Censorship and Reproductive Freedom in France” is featured in the APA’s Women in Philosophy blog series, found here.

Michael Allen has two forthcoming publications: “Reconciling Gandhi’s Perpetrator and Victimhood Perspectives On Violence: Knowledge, Intersectionality, and Transcendence,” in Journal of Dharma and “Animal Liberation from a Gandhian Perspective: Political and Spiritual Freedom in the Purusharthas,” to appear in Journal of East-West Thought.

A book edited by Keith Green (with Aurelia Armstrong and Andrea Sangiacomo), Spinoza and Relational Autonomy: Being With Others, has been published by Edinburgh University Press.  Dr. Green’s essay entitled “Spinoza on Affirmation, Anima and Autonomy: ‘Shattered Spirits’” is included in the volume.

Scott Contreras-Koterbay, Professor of Art History and Adjunct in Philosophy, has written a book (with Łukasz Mirocha) called The New Aesthetic and Art: Constellations of the Postdigital, published by Institute of Network Cultures.

Leslie MacAvoy's essay entitled "Heidegger, Dreyfus, and the Intelligibility of Practical Comportment" has been published in Journal of the British Society for Phenomenology.