“We know that alcohol sales are dramatically increasing. Folks are experiencing a lot more anxiety, depression and hopelessness as a result of COVID, isolation, unemployment and all of the stressors increasing people’s mental health problems,” she said.

The change is part of a concerted effort to keep pace with the evolving nature of the opioid crisis, whereby heroin and fentanyl are now the leading cause of unintentional overdose death in the U.S. — not prescribed pain medications.

Dr. Nick Hagemeier, an associate professor at East Tennessee State University Bill Gatton College of Pharmacy, has received a National Institutes of Health (NIH) subaward from Duke University for a grant submitted to the National Institute on Drug Abuse (NIDA). The award will continue to support his research into the role of pharmacists in preventing and treating substance use disorders.

‘Responding to the Opioid Epidemic’ topic of ‘Women on Wednesdays’ talk

East Tennessee State University and other local organizations are confronting the opioid epidemic that has swept the Central Appalachian region in recent years.

Angela Hagaman will discuss some of these initiatives in “Responding to the Opioid Epidemic in Central Appalachia: Evidence, Partnership and Innovation,” a free public talk in the “Women on Wednesdays” lecture series at ETSU.

Sponsored by the university’s Women’s Studies Program, the lecture will be held Nov. 6 at noon in the Reece Museum.

Hagaman is the operations director of ETSU’s Center for Prescription Drug Abuse Prevention and Treatment, whose mission is to partner with affected communities in Central Appalachia to advance the science of substance abuse prevention and treatment.

The Association of Schools and Programs of Public Health (ASPPH) formed the Task Force on Public Health Initiatives to Address the Opioid Crisis. The task force released its findings and recommendations, titled “Bringing Science to Bear on Opioids,” today in conjunction with the publication of a related commentary in the Journal of American Medical Association (JAMA). The JAMA commentary was authored by Pack, Dr. Cheryl Heaton of New York University College of Global Public Health, and Dr. Sandro Galea of Boston University School of Public Health.

Read the Final Report and Recommendations New data released by the Drug Enforcement Administration shows nearly a half-billion prescription pain pills were distributed in Northeast Tennessee and Southwest Virginia during the height of the opioid epidemic. 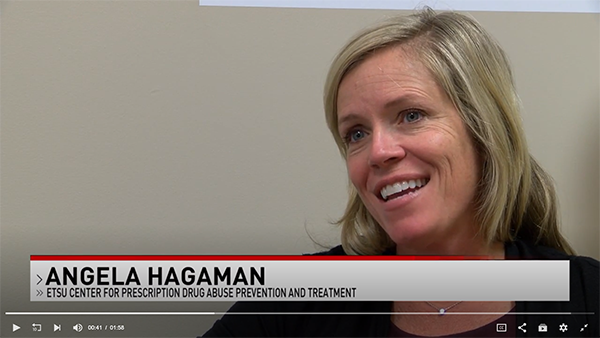 As a Community Pharmacy Practice Research Fellowship Program fellow funded by the Center for Prescription Drug Abuse Prevention and Treatment, Dr. Dan Ventricelli earned an MPH degree in Community and Behavioral health and completed the fellowship in June 2016.  He was recently quoted in a NPR's Morning Edition feature on naloxone. Read more...

All East Tennessee State University residence halls now have the lifesaving drug Narcan or Naloxone.  It reverses the effects of an opioid overdose in seconds – allowing enough time for medical professionals to step in. Read more... 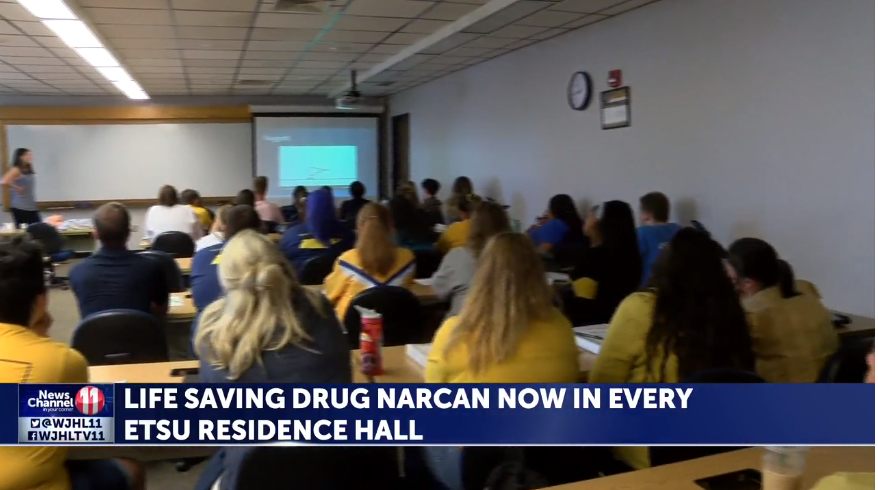 While our region continues to fight the opioid epidemic, ETSU pharmacy students are training resident advisers on how to spot and treat overdoses.  Read more... 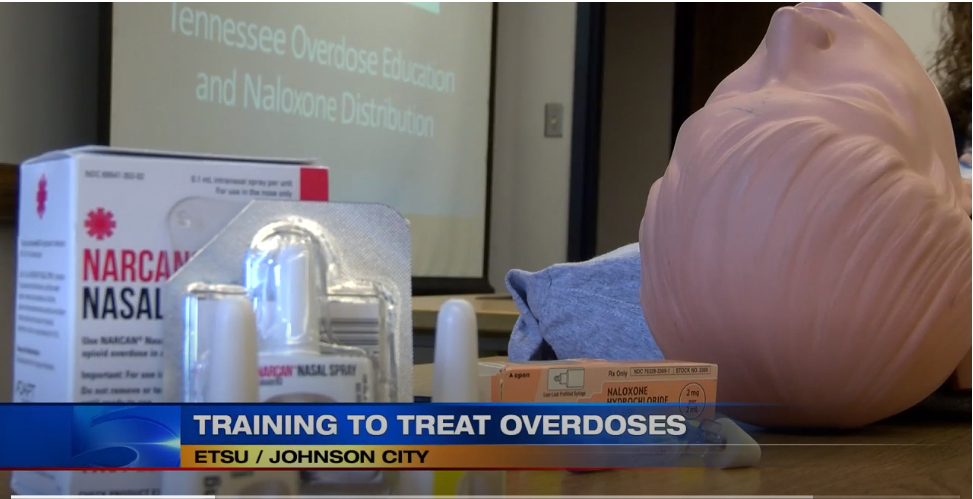 Many of the nearly 1,300 Tennesseans who died from opioid overdoses in 2017 could’ve been saved with naloxone, a medication which reverses the effects of opioids on the brain.  Read more... 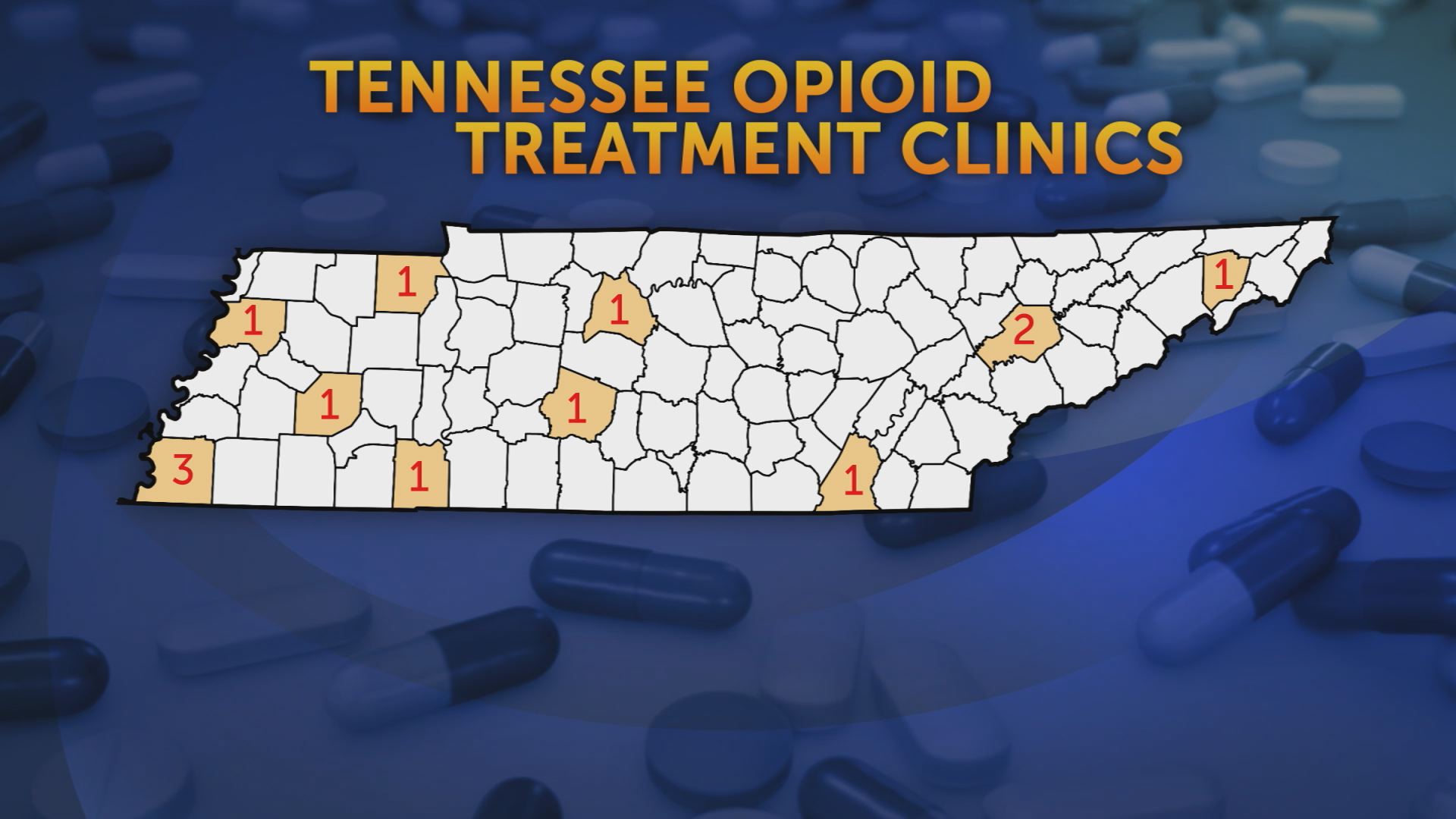 Dr. Nick Hagemeier, an associate professor in the East Tennessee State University Bill Gatton College of Pharmacy, is among just 28 individuals – and one of only two pharmacists – across the country appointed to a national task force charged with looking at best practices related to pain management.  Read more...

Project ECHO will link specialist teams at an academic “hub” with primary care clinicians in local communities – the “spokes” of the model. Together, you’ll participate in weekly teleECHO™ clinics that act like virtual grand rounds combined with mentoring and patient case presentations. Read more...

East Tennessee State University and Ballad Health are joining forces with institutions across the region to combine resources, communication, workforce and expertise to battle the opioid crisis in central Appalachia.  Read more... 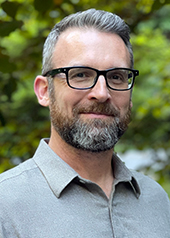 Cover2 talks to Dr. Stephen Loyd and Dr. Robert Pack about the transformation of their community, which helped establish OverMountain Recovery. This is an outpatient treatment program in the heart of Appalachia that provides counseling and treatment for those battling addiction. The podcast with an introduction from Beth Macy. 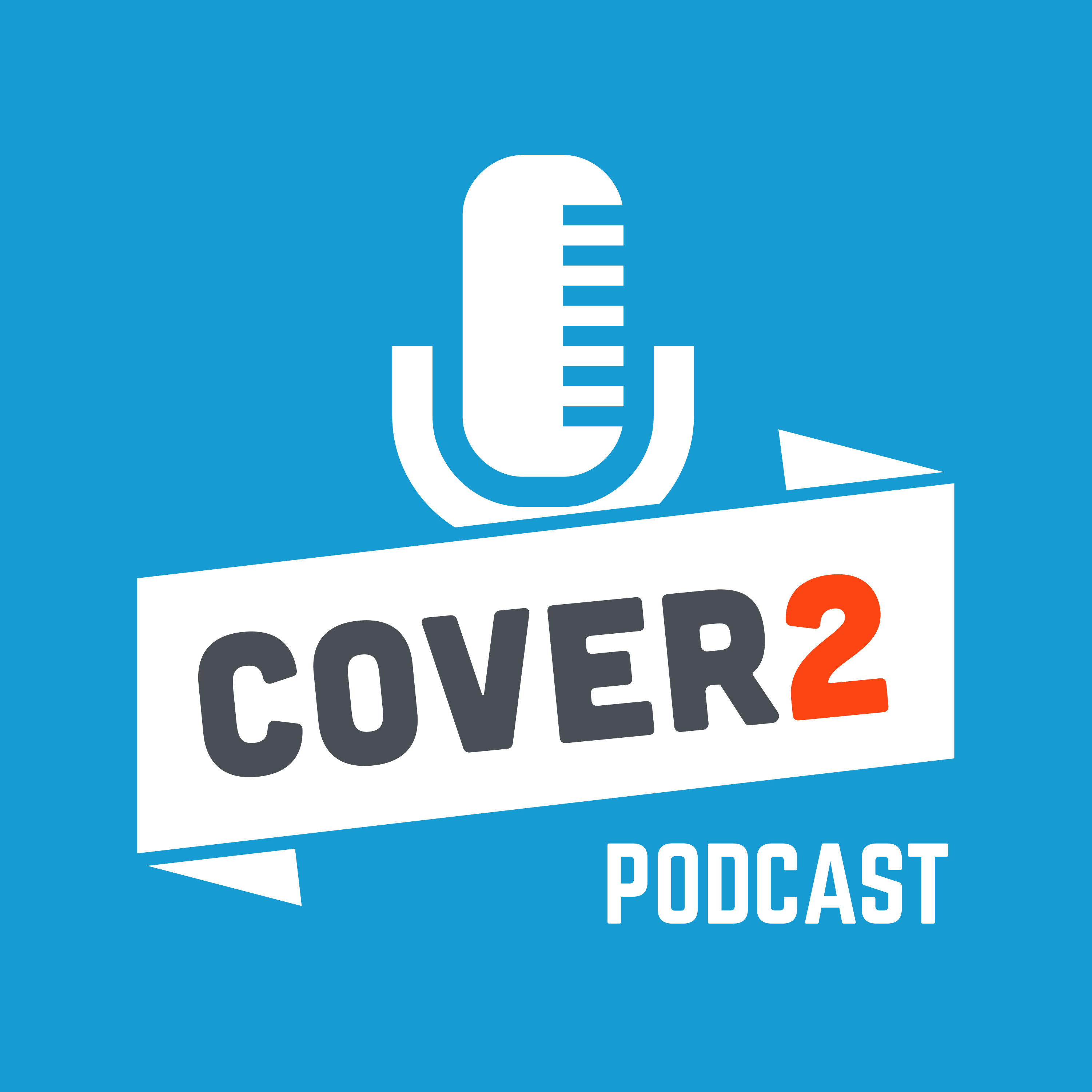 Drs. Robert Pack and Angela Hagaman along with their clinical partner Alice McCaffrey provided key insights on the goals, public health significance, rationale, and results of their award-winning project East Tennessee State University Responds to the Opioid Epidemic Through Interprofessional Education, Community Engagement, Research, and Clinical Care. Webinar panelists shared remarks on how their innovative approach and collaborative partnerships have impacted the prevention and treatment of substance abuse throughout east Tennessee and the region. 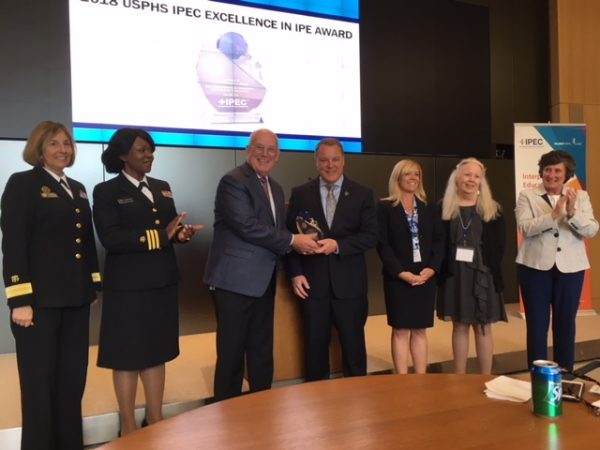 East Tennessee State University is working with area leaders and businesses to combat and prevent substance abuse through a workplace prevention program.

Angela Hagaman, the director of operations for the ETSU Center for Prescription Drug Abuse Prevention and Treatment Team Awareness, said it is clear northeast Tennessee needs more help combating the opioid epidemic. "We all know that we're having a terrible time with this epidemic in our region and in our state," Hagaman said. "Employers keep coming to their elected officials, talking about the difficulty in having a viable workforce."

But she believes and evidence-based prevention program called Team Awareness could help change the tide. The program teaches people about stress management and how to talk to and encourage co-workers to get help before potential problems start. 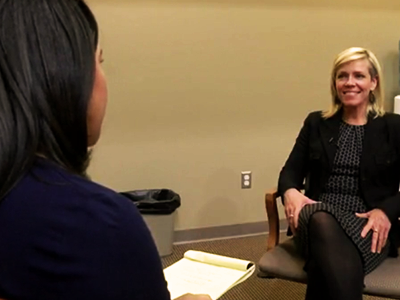 Two months after a controversial medication-assisted treatment center opened in the Tri-Cities, News Channel 11 got an inside look at the treatment process.

Overmountain Recovery is the first methadone clinic to open in the Tri-Cities and there was a lot of controversy surrounding it.

With opioids, a grim reality for outbreak, communities

As it stands, researchers believe that if something doesn’t change, opioids will be the cause of death for nearly 500,000 people within the next decade.

While also painting a picture of the epidemic that he says is heaviest in Southwest Virginia as far as this region, Dr. Robert Pack laid out possible solutions during the Virginia Rural Health Providers Conference, “Intersections” on Wednesday.

Read more at The Gazette-Virginian... 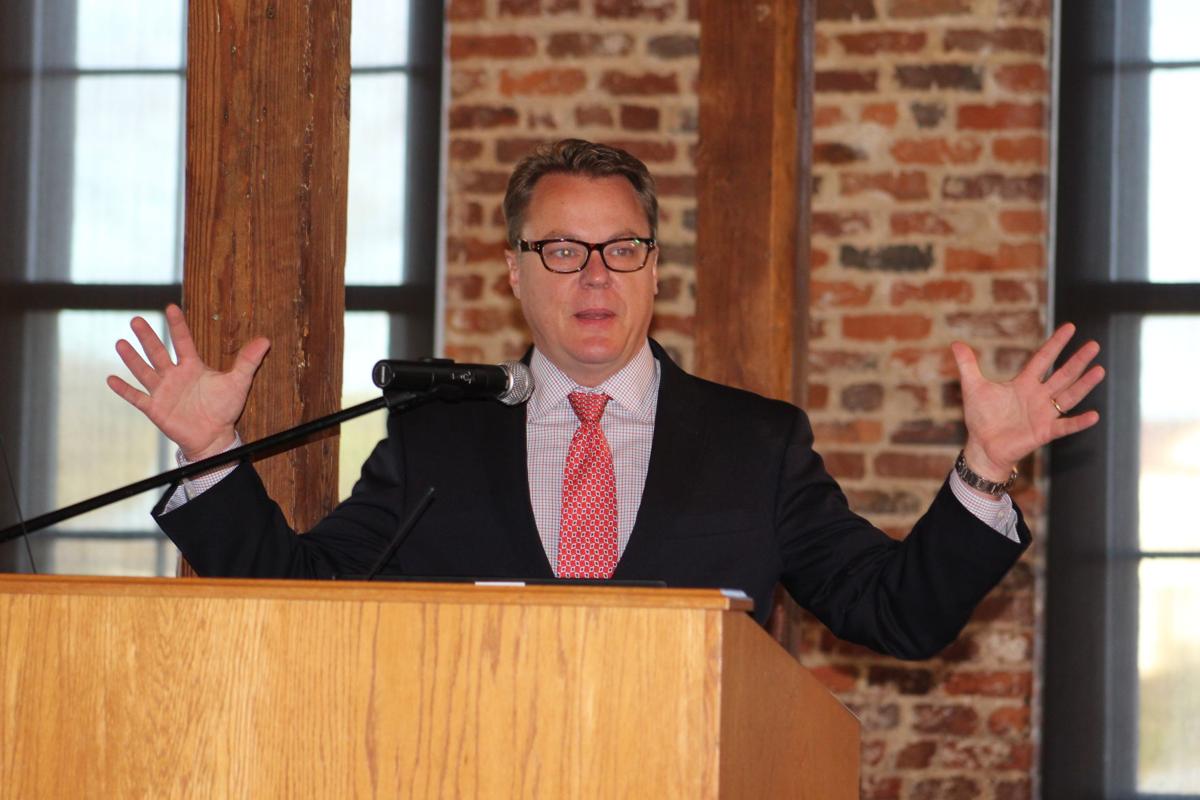 JOHNSON CITY, Tenn. — Little is known about the long-term effects of babies born with neonatal abstinence syndrome caused by opioids, but researchers at East Tennessee State University are working to change that.

The college’s Center for Prescription Drug Abuse Prevention and Treatment is currently establishing a registry using information from the medical records of hundreds of area babies born in the past five years. It is considered the first step in what organizers hope will become a long-term research project.

Read more at the Bristol Herald-Courier... 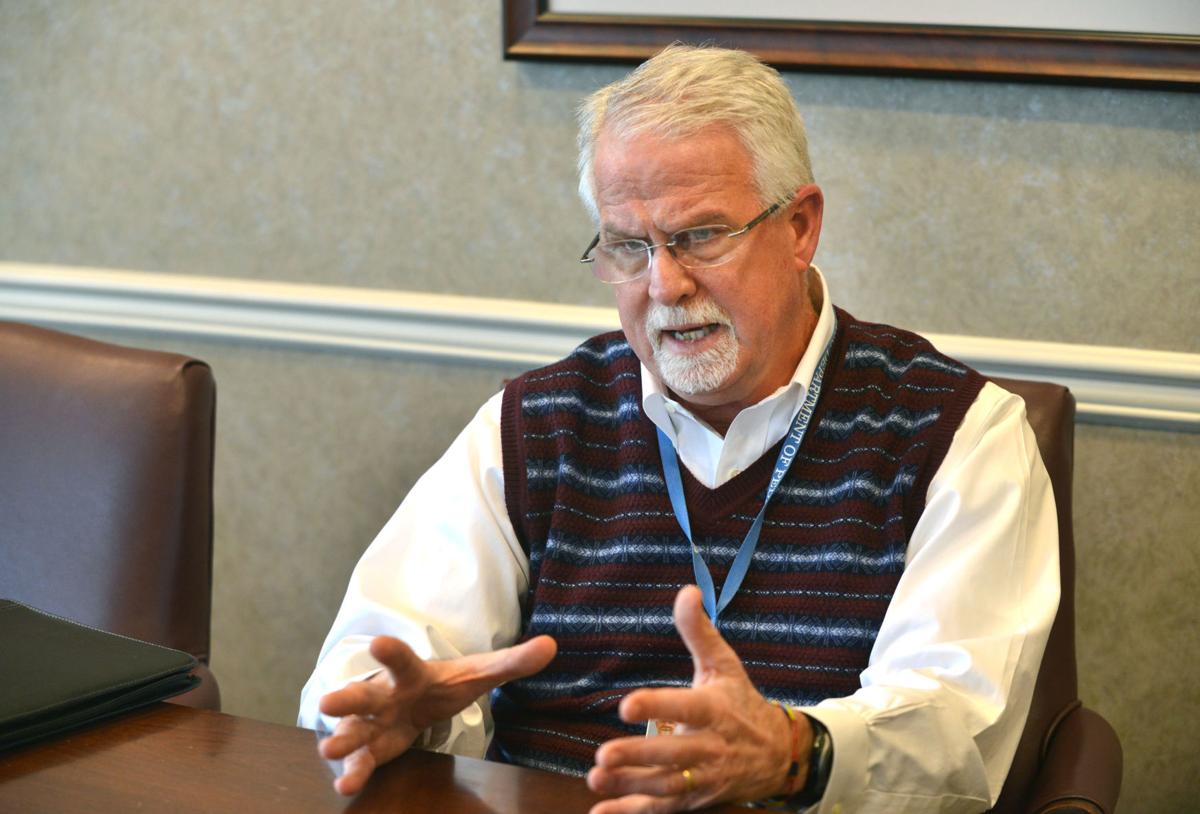 The Briefing was attended by almost 200 House and Senate staff members, along with various addiction research and treatment leaders and advocates.

Public health school leaders in five states in the Appalachian region participated in the briefing:

They discussed the complex and dynamic processes at work in the opioid crisis and shared their findings on unique approaches to address the course of the epidemic. The speakers also discussed how academic public health is assisting affected communities by bringing traditional and novel epidemic control strategies to the disease, including the development and evaluation of treatment options, law enforcement methods, prevention approaches, and state and local policies.

The session concluded with a robust Q&A session. Many of the participants also visited with their respective Congressional delegations and staffs both before and after the briefing to discuss local aspects of the opioid epidemic crisis.