Allergies to red meat have recently become a health concern in the Southeastern United States. Patients who developed a hypersensitivity reaction to red meat were found to have a high titer of galactose-1,3- alpha-glacatose (alpha-gal) IgE. Alpha-gal is predominantly found in the tissues of non-primate mammalian organisms. The mechanism that triggers this allergy has yet to be fully understood. Clinical reports have shown that the allergic reactions took four to seven hours to occur. This timeline coincides with the time period it takes for intestinal lipoproteins to peak in circulation. Due to this observation, it is thought that the alpha-gal molecules are transported by intestinal lipoproteins. We have developed a Western Blot assay to detect the presence of alpha-gal. Laminin, which is known to contain alpha-gal, was used as a control to confirm the assay's ability to detect alpha-gal. Furthermore, we were able to show that the presence of alpha-gal in laminin was inversely proportional to the amount of alpha-galactosidase added to the reaction. Therefore, our preliminary data suggest that our assay is specific, and that it can be used to determine if alpha-gal-containing glycoproteins are present in the intestinal lipoproteins.

Obesity is known to be one of the major health problems in the world which one out of numerous complications may be infertility. Due to several reports, it has been shown that energy balance is linked along with adipocyte derived leptin action to reverse infertility; however, the pathway is yet to be understood. Recent evidence indicates that E-cadherin-beta catenin complex is expressed in rat ovary during folliculogenesis and luteal formation. The modulation of E-cadherin-Beta-catenin expression which is an integral component of remodeling processes, including corpus luteum formation in the ovary. We hypothesized that systemic Leptin modulates the expression of E-cadherin and Beta catenin in dietary induced obese infertile rats, thereby reversing their infertility. Female Sprague-Dawley rats were fed with either Regular chow diet or High fat diet. With the monitoring of their estrus cycle, infertility was determined and leptin was injected intra-peritoneally. Compared to the control high fat diet that had a lesser expression of E-cadherin and Beta-catenin, leptin treated were found to have a higher expression of Ecadherin and beta-catenin. This finding supports the probable mechanism at which leptin reverses infertility in obese infertile rats and could lead to proper understanding of the pathway Leptin uses.

It has been well documented that spaceflight has adverse effects on many tissues and systems throughout the body. Although this phenomenon is well documented, little research has been done in the area of the female reproductive system. If space flight has harmful effects on the female reproductive system, the eventual migration of the human species into space would be greatly compromised. The purpose of this study was to determine the effects of spaceflight on the apical mucin layer thickness in the vaginal canal of mice. This study examined the thickness of the vaginal mucin lining from female mice that were flown on the space shuttle Endeavour for 13 days in August, 2007 and their concomitant controls. The tissues were harvested, fixed in paraformaldehyde, paraffin embedded, sectioned, and subsequently stained using an Alcian Blue Periodic Acid Schiff technique commonly used to localize and analyze mucin varieties. The tissue was qualitatively analyzed for the type of mucin produced, i.e., acidic, neutral, acidic/neutral mixture. Further, the tissue was quantitatively analyzed for the amounts of mucins produced by measuring the thickness of the mucin layer. One way ANOVA tests were used to compare mucin thickness between all three sets of animals (Flight, Base Line, Ground Control). For the majority of the Baseline tissues the mucin layer was too thin to be measured. The mucin layer of the Ground Control tissue was thicker than that of the Base Line, but not statistically significant. The mucin layer of the tissue from Flight mice was the thickest of the three groups. It was significantly thicker than the Base Line tissue, but not significantly thicker than the Ground control tissue. These results indicate that space flight causes a thickening of the mucin lining of the vaginal canal. However, it also appears that the type of cage used for space flight, known as an Animal Enclosure Module, also has an effect on this mucin layer, presumably due to internal cage environmental factors. Whether a thicker vaginal mucin layer would be advantageous, deleterious, or of no consequence is yet to be determined.

Rhizobium leguminosarum is a gram-negative soil bacteria that can exist in either a free-living state or in symbiosis with leguminous plants. Independent of living habitat, Rhizobia species require iron for metabolic functions. Rhizobia species have an additional requirement for iron as it acts as a cofactor for nitrogenase, the enzyme responsible for fixing atmospheric nitrogen gas (N2). Although ubiquitous in the Earth's crust, iron forms insoluble ferric complexes in the presence of oxygen and at physiological pH. In response, Rhizobia species have utilized siderophore mediated iron transport systems to meet their iron requirements. Our lab has shown that Rhizobium leguminosarum ATCC 14479 produces the trihydroxymate siderophore vicibactin when exposed to iron-deficient conditions. We hypothesize that the import of the ferric iron-vicibactin complex is energized by the TonB-ExbB-ExbD system that is found within other gram-negative species. In this study, we have identified a putative TonB-like protein. A TonB knockout mutant was created and compared with wildype ATCC 1449 in its ability to transport Fe55 bound vicibactin into the cell. Also, the TonB of R. leguminosarum is interesting due to its size, 450 amino acids, compared to the TonB of E. coli, which is 239 amino acids. Many groups have attempted structural analysis of full length TonB and the C-terminus of TonB in E. coli. The results of these analyses have been inconsistent, producing a variety of crystallographic and NMR structures. We attempt to express full length TonB and two different sized TonB C-terminals (120 and 200 amino acids) using pET17b in the heterologous species E. coli.

Bacteria causing morbidity and mortality in humans is a field of constant research, and because of this new ways of screening mutants for virulence are always being sought. High throughput screening is time consuming, expensive, and raises ethical concerns. A more efficient, and cost effective, model system using simple organisms have been favored lately. Dictyostelium discoideum is an amoeba that dwells in the soil, and is a natural predator for bacteria. Because of this predation, bacterial virulence factors have evolved to counter phagocytosis and kill the amoeba. D. discoideum has been used to examine the pathogenesis of bacteria, such as Pseudomonas aeruginosa, because this amoeba has qualities similar to macrophages. Both of these cells have lectin-type receptors that recognize a wide variety of sugar residues on the cell surface which induces a phosphorylation cascade that leads to phagocytosis; a process that is similar to both macrophages and D. discoideum. Due to these similarities D. discoideum has been used as a model to investigate bacterial pathogenesis. In order to quantitate virulence factors a quantitative assay needs to be developed. This assay will be used on P. aeruginosa to screen mutants for attenuated virulence. D.discoideum cells will be counted using a hemocytometer to determine how many amoebas will be infected. Colony forming units (CFU) of the bacteria will be calculated to control how many bacterial cells will be used to infect the amoebae. The amoeba will be infected with P. aeruginosa for 4 hours at 23C. Then the cells will be centrifuged and the supernatant will be put onto a LB plate to determine the CFUs of the nonphagocytized bacteria. The pellet left in the microcentrifuge tube will be burst and its contents put onto a plate to determine the amount of phagocytized bacteria. During this virulence assay the wild type P. aeruginosa PAO1 strain will be used as a negative control, and the P. aeruginosa lasR-rhlR double mutant will be used as a positive control. This virulence assay will be used to screen mutants made by transposon mutagenesis in our lab. Preliminary data shows that the P. aeruginosa rsmA mutant has attenuated virulence when screened by the D. discoideum plaque assay. The development of this assay will produce an effective way of screening mutants for virulent effects caused by the deletion of specific genes.

Pseudomonas aeruginosa causes infection in immunocompromised hosts including cystic fibrosis individuals. P. aeruginosa causes acute infections, symbolized by virulence factors such as expression of the type three secretion system and type four pili. Chronic infections can also be caused by P. aeruginosa, characterized by the expression of type six secretion and overproduction of alginate. The global regulator RsmA posttranscriptionally controls many virulence factors and has been shown to regulate both T3SS, T4P, T6SS and alginate. RsmA is important in virulence as demonstrated in a mouse model of infection. However, little is known regarding the transcriptional controls of rsmA. Initial studies using an rsmA-lacZ transcriptional fusion indicated that rsmA expression is increased in a mucA mutant. In order to better understand RsmA regulation, we performed transposon mutagenesis on a mucA mutant harboring an rsmAlacZ transcriptional fusion. After screening approximately 4000 mutants, 12 mutants were identified that were decreased in -galactosidase activity. One mutant contained an insertion in PA1626, encoding a putative MFS transporter. A constructed deletion mutant, mtpX, confirmed a 4-fold decrease in rsmA expression. RNase protection assays detected a single RsmA transcript that was also decreased in mtpX confirming the transcriptional fusion results. In addition, Western blot analyses using an HA-tagged RsmA demonstrated a significant decrease in RsmA production. This system may provide a signaling mechanism that is responsible for increased rsmA expression. Currently, the mechanism for how this putative transporter controls rsmA expression is under investigation. This system may provide a new potential chemotherapeutic target for P. aeruginosa infections.

BACKGROUND: There has not been a good in vitro model for producing chylomicrons, the largest lipid particles (diameter > 80 nm). Consequently, many cellular and molecular studies of intestinal lipid absorption are hindered. AIM: To determine the optimal conditions for inducing chylomicron production, including the types and amounts of lipids added to the cells, the differentiation stage of the cells, the lipid incubation time, the lipoprotein collection time, and the amount of the collagen coating. METHODS: Differentiated Caco-2 cells were incubated with lipid mixture on the collagen-coated plates, and the secreted lipoproteins were collected and fractionated by gradient ultracentrifugation. The concentration of triglycerides (TG) in the lipoprotein fractions was determined by using colorimetric assay. The lipoproteins were also negatively stained and analyzed by transmission electron microscopy (TEM). We tested the importance of each component of lipid mixtures (Oleic Acid, Mono-Olein (MG), and Lecithin), differentiation stage of the cells (4, 13, 17, and 23-day post-confluent), lipid incubation / lipoprotein collection time (2 hour incubation + 2 hour collection, 2 hour incubation + 4 hour collection, 4 hour incubation + 2 hour collection, and 4 hour incubation + 4 hour collection), and collagen coating (0 g/plate, 50 g/plate, 100 g/plate, 500 g/plate). RESULTS: One-way ANOVA shows that there were significant effects of cell differentiation (p=0.009) and Oleic Acid (p=0.0049) on the TG concentration in the chylomicron fraction. On the other hand, lipid incubation / lipoprotein collection time (p=0.38), MG (p=0.35), Lecithin (p=0.068), and collagen coating (p=0.42) did not result in a significant effect. Importantly, chylomicrons were visible under TEM. CONCLUSIONS: Our data collectively suggest that Oleic Acid is the most important component of the lipid mixture, and that differentiated Caco-2 cells behave more like intestinal epithelial cells. The ability to produce chylomicrons in vitro will be useful for studying the cellular and molecular aspects of intestinal lipid absorption.

Enrichment culturing was utilized to recover Rhodococcus from soil samples collected from varying areas of Tennessee. Rhodococcus strains were identified by Gram staining, pigmentation, and analysis of the 16SrRNA gene. Extracts were prepared from solid agar after two weeks of growth and assayed for growth inhibition activity by disk diffusion method.

Enrichment culturing was utilized to recover Rhodococcus from soil samples collected from varying areas of Tennessee. Rhodococcus strains were identified by Gram staining, pigmentation, and analysis of 16SrRNA gene. Extracts were prepared from solid agar after two weeks of growth and assayed for growth inhibition activity by disk diffusion method. 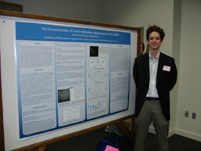 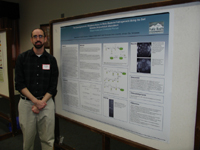 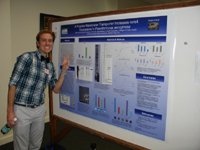 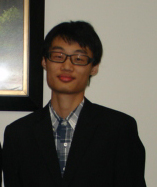 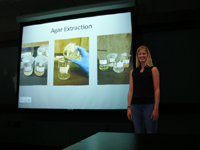 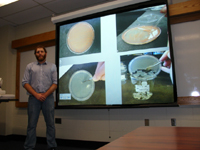