JOHNSON CITY (Jan. 13, 2021) – Dire wolves were some of the largest and most significant predators of Ice Age North America between 250,000 and 13,000 years ago, but not much is known about the details of their evolution and extinction. It has long been thought that dire wolves were close relatives of the gray wolves that still live in North America today, but a surprising new study published in the journal Nature has found that is not the case at all.

This study, “Dire wolves were the last of an ancient New World canid lineage,” presents the collaborative work of nearly 50 scientists from around the world, including Dr. Blaine Schubert, executive director of the Center of Excellence in Paleontology at East Tennessee State University and a professor in the Department of Geosciences. 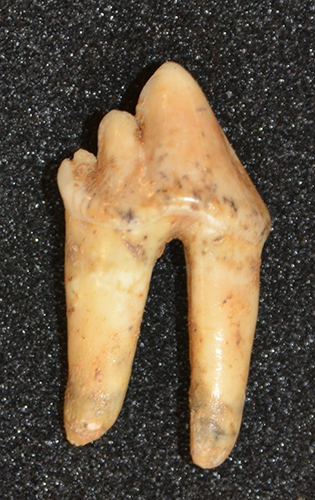 The bones of dire wolves (Canis dirus) and gray wolves (Canis lupus) are so similar that they can be tough to tell apart, which has led paleontologists to think of them as close cousins. The authors of the new study wanted to know if the wolves’ DNA told the same story. For that, they needed dire wolf fossils with well-preserved genetic material, and this is where Schubert got involved.

Schubert has worked with dire wolf fossils from several cave localities, so when the team needed fossils to sample for DNA, he turned to the fossil collections from northeastern Tennessee. One fossil in the collections, a partial tooth from a cave in Sullivan County, turned out to have well preserved DNA.

In addition to his role in research and writing for the study, Schubert brought renowned paleoartist Mauricio Antón to the team, who reconstructed the dire wolf in a new mural. Antón was the chairholder of the Wayne G. Basler Chair of Excellence in the Arts, Rhetoric and Science in ETSU’s College of Arts and Sciences in the spring 2020 semester.

With the tooth from Sullivan County and four other fossils from across the United States, the researchers compared the full genomes of dire wolves with those of living canine species. This genetic evidence indicates that even though dire wolves and gray wolves evolved very similar skeletons, they were only distantly related.

“To me, one of the most fascinating aspects of incorporating ancient DNA work into paleontology is that it allows us to test our assumptions about how species are related based on overall appearance,” Schubert says. “Using the shape of bones and teeth, researchers have long assumed a close evolutionary relationship between gray wolves and extinct dire wolves. However, the genetic work reveals this was not the case; dire wolves branched off early, and gray wolves are more closely related to African wolves and coyotes.”

“Hybridization across Canis species — which include wolves, dogs, coyotes and jackals — is thought to be very common,” said Laurent Frantz, a professor from Queen Mary University and Ludwig Maximilian University of Munich and the last author of the study. “This must mean that dire wolves were isolated in North America for a very long time to become so genetically distinct.”

Learn more about opportunities to study at the Gray Fossil Site.

These results also provide clues as to why dire wolves went extinct while gray wolves and other canines survived. Lots of interbreeding between gray wolves, coyotes and other closely related species might have provided them with a wide variety of genetic tools that allowed them to adapt in the changing environments toward the end of the Ice Age. Dire wolves, on the other hand, missed out on all that gene-swapping, which may have left them vulnerable to extinction.

This study is an example of just how much can be learned even from unassuming fossils collected years ago. Schubert said, “This exemplifies the tremendous scientific value of such collections in museums.”

To read the article, go to https://rdcu.be/cdvDH.

In the mural shown at the top of this page, created by renowned paleoartist Mauricio Antón, a pack of dire wolves (the larger, more reddish animals) defend their bison kill from a pair of intruding gray wolves somewhere in North America.