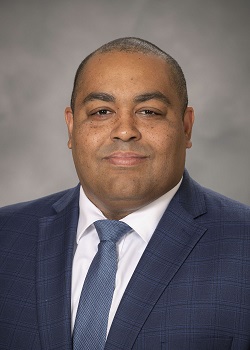 Dr. Daryl A. Carter is professor of history in the Department of History. I joined the faculty at ETSU in August 2008. In 2004, I received the B.S. in Political Science degree from ETSU. In 2006, I received the M.A. in History degree from ETSU. In 2011, I was awarded the Ph.D. in History degree from The University of Memphis. My area of expertise is 20th century and 21st century American political history. Moreover, I look at the intersections of race, class, and gender, and how they impact American political history.

My scholarship is diverse and wide-ranging. I am the author of the well-regarded Brother Bill: President Clinton and The Politics of Race & Class (The University of Arkansas, 2016). My work has been presented at both regional and national conferences, in encyclopedias and book chapters.

Brother Bill: President Clinton and the Politics of Race and Class

As President Barack Obama was sworn into office on January 20, 2009, the United States was abuzz with talk of  the first African American president. At this historic moment, one man standing on the inaugural platform, seemingly a relic of the past, had actually been called the "first black president" for years.

President William Jefferson Clinton had enjoyed the support of African Americans during his political career, but the man from Hope also had a complex and tenuous relationship with this faction of his political base. Clinton stood at the nexus of intense political battles between conservatives' demands for a return to the past and African   Americans' demands for change and equality. He also struggled with class dynamics dividing the American electorate, especially African Americans. Those with financial means seized newfound opportunities to go to  college, enter the professions, pursue entrepreneurial ambitions, and engage in mainstream politics, while those without financial means were essentially left behind. The former became key to Clinton's political success as he skillfully negotiated the African American class structure while at the same time maintaining the support of white Americans. The results were tremendously positive for some African Americans. For others, the Clinton presidency was devastating.

Brother Bill examines President Clinton's political relationship with African Americans and illuminates the nuances of race and class at the end of the twentieth century, an era of technological, political, and social upheaval.

"This book is a fascinating analysis of race and class in the age of President Bill Clinton. It provides much-needed clarity in regards to the myth of the 'First Black President.' It contributes much to our understanding of the history that informs our present moment!"
—Cornel West