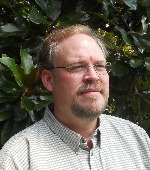 Dr. Lee is a native East Tennessean. He graduated with a Bachelor of Arts degree from East Tennessee State University, received a Master of Arts degree from Wake Forest University, and received a doctoral degree from the University of Tennessee with a specialization in the history of the U. S. South. He has taught at the University of Tennessee Knoxville, Roane State Community College, Hiwassee College, and currently is an Associate Professor of History at East Tennessee State University. In addition to the U.S. history survey, the Tennessee history survey, and the department's historical methods course, he has taught undergraduate and graduate courses on the South, Appalachia, agricultural history, urban history, and Public History. From 2006-2012, he served as the public historian for the Tennessee's First Frontier Teaching American History Project and currently serves as acting secretary for the Society of Appalachian Historians.
In 2005, the University of Tennessee Press published his book, The Tennessee-Virginia Tri-Cities: Urbanization in Appalachia, 1900-1950. He is currently working on articles and another book focused on the history of tobacco in Southern Appalachia.

The Tennessee-Virginia Tri-Cities: Urbanization in Appalachia, 1900-1950

In 1900, the Appalachian region of northeast Tennessee and southwest Virginia began to change. The inhabitants were dependent on the resources of the rural land, but the arrival of railroads spawned industrialization. Over the next several decades, families moved down from the mountains into the valley of East Tennessee as workers took jobs in the developing urban centers. Country stores, two-lane roads, and cornfields would eventually give way to cities, multi-lane highways, and new housing. The Tri-Cities—Kingsport, Johnson City, and Bristol—were starting to form.

In this carefully documented book, Tom Lee uses archival material, newspapers, memoirs, and current scholarship in Appalachian studies to examine the economic changes that took place in the Tri-Cities region from 1900 to 1950. With modernization and urbanization, an urban-industrial strategy of economic development evolved. The entry of extractive industry into the mountains established the power of the urban elite to shape rural life. Local businessmen saw the route to financial strength in the recruitment of low-wage industry. Workers left struggling farms for factory jobs. This urban-rural relationship supported the Tri-Cities' manufacturing economy and gave power to the area's elite.

The New Deal and the Second World War broadened this relationship as federal funding sustained the economy. The advantages of urban centers after decades of development left rural communities on the verge of disappearance and dependent on the jobs, opportunities, and economic vision of the cities. By 1950, the power of Appalachia's elite over the people of the region had extended beyond urban boundaries and brought about the conditions necessary for the creation of the metropolitan Tri-Cities area of today.

Readers will gain a better understanding of the complexity of modernization in Appalachia and the rural South from this engaging book.

"The Lost Cause That Wasn't?: East Tennessee and the Myth of Unionist Appalachia," in Reconstructing Appalachia: The Civil War's Aftermath in Appalachia. Andrew Slap, ed. Lexington: The University Press of Kentucky, 2010.