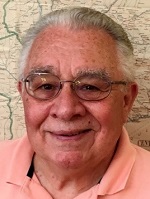 Dr. Page retired from ETSU in 2011 after twenty-four years of service in the History Department; he had previously taught at Murray State University (Kentucky). He was also Fulbright Lecturer in History at Chancellor College of the University of Malawi, Visiting Associate Professor of History at Kenyatta University (Kenya), and Fulbright Professor of History at the University of KwaZulu-Natal (South Africa). He received research grants from those universities, the American Council of Learned Societies, the Fulbright Visiting Scholars Program, and was Pew Faculty Fellow in International Affairs at the Kennedy School of Government, Harvard University. He was a founding editor of H-Africa, the H-Net discussion forum for Africa, and is now Africa section co-editor of 1914-1918- online, International Encyclopedia of the First World War.

Can an African soldier be loyal to his British regiment and still remain devoted to his own society and its beliefs? Juma Chimwere believes he must! Distinguished Conduct is a fictionalized biography recounting a real-life Malawian asilikali’s life of doing so. Starting as an eager Yao recruit in the Central African Rifles, through more than a half century of British colonialism in Nyasaland, Juma remains faithful to his goal. Sometimes questioning the ongoing effects of his service, his continued devotion to duty nonetheless merits many awards, including medals personally presented by King Edward VII and the Governor of Nyasaland. After retirement his efforts turn more towards encouraging family enterprise and promoting an independent, united Malawi. Yet through his entire journey, Juma earns the respect not only of his fellow Africans, but his King’s African Rifles commanders as well.

A Short Guide to Writing About History

Conceived by Richard Marius as a guide for college students writing history papers, A Short Guide to Writing About History evolved from his initial vision through nine editions. With Dr. Page as co-author after Marius’s untimely death in 1999, the book became as key resource for students and writers worldwide who share a passion for the study of history. Emphasizing that historical research and writing about the past is much more than merely assembling a collection of facts, the book insists that writing history is fundamentally a way of thinking, We cannot know history well unless we write about it, transforming what sometimes seems an undigested jumble of facts and information into a story about the past intended to be true.

When it was published in 2003, Colonialism was the most extensive reference work available on the subject. As General Editor, Dr. Page collected more than 600 entries, all by international experts in history, political science, economics, sociology, and other social sciences. Their short essays offer comprehensive coverage of colonies, international organizations, powerful companies and individuals, as well as doctrines, wars, and religion. Entries also examine colonialism’s varied legacy from xenophobic nationalism, racism, and cultural displacement to independence, the flowering of postcolonial literature, and the spread of democracy. Organized for easy access, the three volumes are also generously illustrated.

The Chiwaya War: Malawians and the First World War

“The book’s greatest strength is the truly impressive body of … interviews. …This rich vein of oral history provides an in-depth and intimate account of how the First World War influenced nearly every aspect of daily life in colonial Nyasaland.” --The Journal of African History

“Page’s massive effort … has plowed through cubic acres of archival and printed materials, incorporating the voice of a heroic generation of soldiers and porters into a national narrative.”               --Journal of Interdisciplinary History

This fascinating story of how Malawians were pulled into the horrors of a modern war is now scheduled for a 2nd edition.

Africa and the First World War

The ten essays in this collection, including a substantive introduction by Dr. Page, who also edited the volume, provide fascinating insights into the frequently forgotten impact of the First World War on the African continent. Each essay is based on original research in Africa by a pioneering scholar placing African experiences within the full context of a truly world war. Most of the essays also include considerable reliance on oral historical information. Taken together, these essays offer a clear and detailed picture of the effects the “great war for civilization” had on a continent too frequently ignored by general histories of the conflict.

“Up From the Farm: A Global Microhistory of Rural Americans and Africans in the First World War,” The Journal of Global History 15, 2(July 2020): x-y.

“Multiculturalism, the State, and the ‘Welfare of All’: The Central African Federation in History and Myth,” in 18th International Congress of the Historical Sciences [Proceedings], Claude Morin, editor. Montréal: Comité International Sciences Historiques, 1995, pp., 494-496.

“A Method for the Madness: Interdisciplinary Approaches to Teaching World History,” in What Americans Should Know: Western Civilization or World History?, Josef W. Konvitz, editor. East Lansing: Michigan State University and the National Endowment for the Humanities, 1985, pp. 99-105.