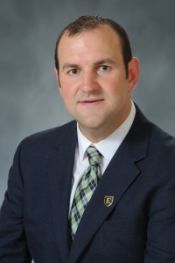 Dr. Glennon joined the faculty at ETSU after completing his Ph D at the University of Tennessee-Knoxville and teaching at Fort Lewis College in Durango, Colorado. He teaches courses in public law and American politics and serves as the Pre-Law advisor for the University. His research focuses on judicial behavior and judicial legitimacy. He he has co-authored texts in the fields of constitutional law, American government, and American political thought.

Dr. Glennon's research interests focus broadly on judicial behavior, the relationship between courts and other branches of government, and citizen perceptions of judicial legitimacy. He has authored manuscripts which appeared in Law and Social Inquiry, Journal of Law and Courts, Politics and Policy, and Judicature among others.

Strother, Logan and Colin Glennon. “An Experimental Investigation of the Effect of Supreme Court Justices’ Public Rhetoric on Perceptions of Judicial Legitimacy.” 2020. Law and Social Inquiry.